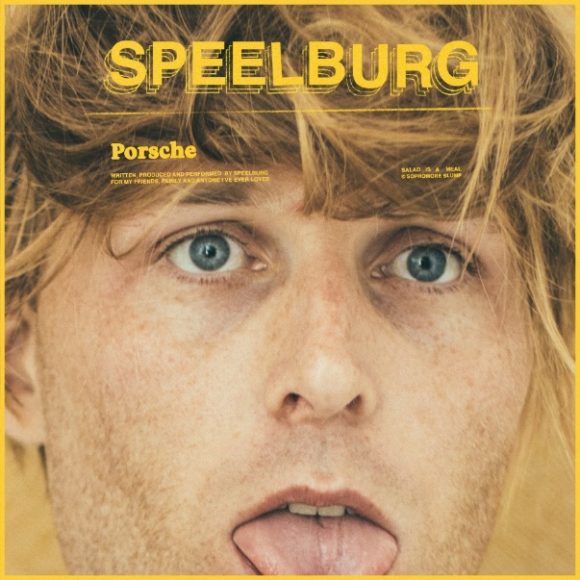 “A lot of the album is so eclectic,” Speelburg said. “One song will be quite hip-hop. The other one will be quite dancey or upbeat or low-fi. There’s such a wide scope. I get bored easily, so I want to make all these different genres.”

A Belgian-American, raised in France, Speelburg grew up surrounded by diverse music. While living in France, ABBA and the ska band Tryo were major influences. From the American scene, he listened to New York’s Moon Ska Records, Beck, The Dust Brothers, Cut Chemist, The Avalanches, Paul Simon and Vampire Weekend.

“I have always been really into hearing new stuff,” he said. “I grew up listening to so much reggae and ska in France. Then, my aunt and uncle had a reggae magazine in Baltimore. Going to their house was like going to a giant record store.”

These various influences led to Speelburg’s distinctive aesthetic, which he describes as “very weird pop.” His “very werid pop” has been well-received, cementing him as an up and coming artist.  Since his debut in 2014, Speelburg has amassed more than 11 million total streams from singles and shorter EPs, and his 2019 single “Say Hello” appeared in commercials for Google Pixel and Samsung.

On “Porsche,” his first full-length album, he builds off his previous releases, melding his signature electropop with new genres. Each track is like an artistic miniature of a different style.

The opening track “Everything I Know” channels Capital Cities’ “Safe and Sound” with Cautious Clay’s sax hook and a driving beat. “Gwyneth (Get Up!),” named after Gwyneth Paltrow, shifts to a lush Vampire Weekend aesthetic with a dash of 80s Prince funkiness. In “Life In Between,” Speelburg shows off his rich baritone vocals, crooning and belting like Hozier in “Angel of Small Death & The Codeine Scene” with an electropop twist.

“Lay It Right” and “When You Want Me” are modern funk with a touch of Stevie Wonder and James Brown. “Crash & Burn” and “Entertaining The Notions” harken back to the 90s of Beck’s lo-fi, experimental style and The Dust Brothers’ groovy sampling. “World Is Falling Apart (this version)” mixes David Guetta EDM with Vampire Weekend’s upbeat energy.

Creating such a wide palette of sounds on “Porsche” is remarkable, especially considering Speelburg wrote and produced the album himself. After recording the album, Speelburg also worked with producer Ben H. Allen III to finalize the mix of “Porsche.” Allen, a Grammy Award-winning producer, is known for his work for Gnarls Barkley, Kaiser Chiefs, Cut Copy and Neon Indian. Speelburg worked with Allen over Skype for a couple of weeks to fine-tune the mix, an experience Speelburg found educational.

“By the end (of working with Allen), I had a much deeper understanding of what mixing a record is,” Speelburg said. “It’s a lesson worth learning. It’s liberating. He was right. His vocal mix is so much better than mine. His bass and kick—the way they work together—are so much better than I could have made it. I am really happy we got him to help finalize it. I am so lucky to have him in the liner notes.”

Amidst the stylistic collage, Speelburg also puts his own twist on the album, if you listen beyond the familiar sounds. He writes weird, playful and personal lyrics that talk about love, his childhood and the death of his mother and weaves in childhood tape samples. Throughout the album, he also references pop culture and shows his passion for cinema (evident in his name Speelburg, a nod to Steven Spielburg).

“I hope the audience finds their own meaning in the lyrics,” Speelburg said. “I hope it comes off as a fun and hopeful album. It’s a full body of work—a first offering as an artist.”

Listen to “Porsche” on Spotify here. Watch the music video for single “Gwyneth (Get Up!)” on YouTube here. Speelburg will perform for a livestreamed release concert later in October.