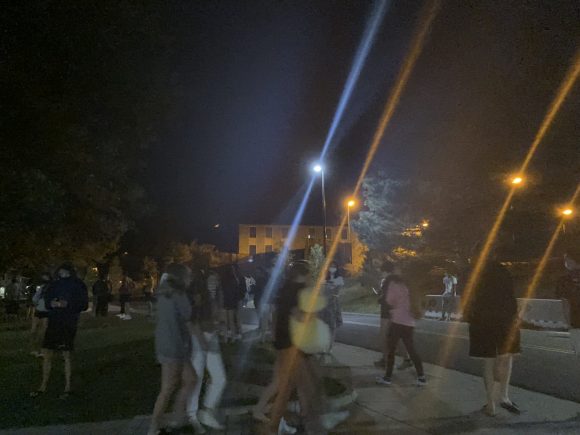 On Wednesday, all residence halls located in the Kittredge area at the University of Colorado Boulder carried out regular fire drill procedures.

Residents were unaware of the scheduled fire drill until alarms had sounded, where hundreds of students were evacuated and assembled together outside the dorms over the course of an hour — between 8:15 p.m. and 9:15 p.m.

The International Fire Code (IFC), followed by the State of Colorado, requires that emergency evacuation drills are held at specific intervals in order to prepare every occupant with the understanding of the typical protocol for evacuation during an actual fire. For CU Boulder dorms, this means that fire drills must be held twice per academic calendar year. Fire drill requirements include evacuating all occupants, including staff, in under 5 minutes, to a pre-designated outside location for assembly.

More than 150 students are housed in each CU Boulder residence hall. Entire buildings were evacuated during the recent fire drill, per the IFC.

Boulder County Public Health recently issued an order to limit the spread of COVID-19, stating: “Gatherings of more than two persons within the city of Boulder that include any person or persons between the ages of 18 and 22 years are prohibited.” However, there are exceptions to this order, including the allowance of anything required by law, such as mandatory fire drills.

While fire drills are an exception to the order, many students were seen not adhering to social distancing requirements. Maddy Gleason, a resident in Arnett Hall, said, “I got written up for three people in a social setting. and having a university-mandated drill where we were in extremely close and unmonitored quarters was extremely frustrating.”

When asked what precautions CU took to mitigate the spread of COVID-19 during fire drills, Scott Pribble, a spokesperson for CU, said, “(Residence assistants) were aware of the drill in advance and instructed to remind students to stand six feet apart and to wear a mask. Only a small handful of students were not wearing masks during the drill. They were advised to raise the collar of their shirt up to cover their nose and mouth and to maintain six feet of distance until they were back in their room.”

Zoe Mcelhaney, a resident in Arnett Hall, said the “fire drill was really alarming and unexpected, and wasn’t really in COVID regulation.”