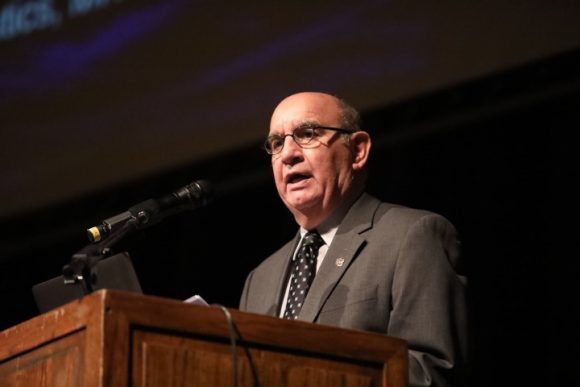 The memo refers to the establishment of the IDEA Plan’s new Community Council for Inclusion (CCI) on Aug. 12 and Chancellor Philip DiStefano’s Community Safety Task Force on Aug. 18.

“My goal for the memo was to let Chancellor DiStefano and his executive team know that someone knows and is paying attention to their steps in making CU Boulder an antiracist institution,” Olivarez said in an email.

Olivarez is an NSF Graduate Research Fellow and a leader of diversifyCUnow, a coalition of individuals and groups across all of CU’s campuses committed to making CU an actively antiracist institution.

The Inclusion, Diversity, and Excellence in Academics (IDEA) Plan was approved in the fall of 2019 after years of false starts, four years after its original conception. It came in response to a 2014 climate survey which showed that CU BIPOC felt unwelcome on campus.

The first steps in implementing this plan have finally begun with the announcement of the CCI members on Aug. 12. The CCI will serve as the advisory board in the IDEA plan’s implementation, working with Office of Diversity, Equity and Community Engagement (ODECE) to form inclusion, diversity and equity strategies, advising university executives in regards to the IDEA Plan and assessing its progress.

This step came suddenly, according to Shoemaker and Olivarez’s memo. They point to four major concerns with the announcement: lack of transparency, lack of communication, lack of accountability and lack of a student voice on CCI.

“We wonder how broad a pool of candidates were nominated for the CCI and who provided the nominations,” said Shoemaker and Olivarez in their statement.

Méndez-Wilson did not go into detail about which specific organizations were involved in this process.

“I and diversifyCUnow are not in disagreement about using the IDEA plan or that there should be a Council, but it does matter who is on the Council,” Olivarez said in an email.

Appendix B of the IDEA Plan stated its specific requirements for the CCI, including, “1. Faculty member (1) (co-chair); 2. Liaison from ODECE (1) (co-chair, permanent staff); 3. Undergraduate student (1); 4. Graduate student (1); 5. Associate or Assistant Dean for Diversity from the colleges and schools (1); 6. Former member of the IDEA Plan Authoring Committee (1).” The board announced Aug. 12 that it includes 25 members.

Shoemaker and Olivarez explained in their memo, “At the minimum membership described in Appendix B of the IDEA Plan, students would have made up one-third of the group. At 25 members, students now only constitute less than one-tenth of the expanded CCI.”

Friday, in an update to the CU community, Vice Chancellor Bob Boswell acknowledged the concerns laid out in Shoemaker and Olivarez’s memo.

“We have heard and will continue to learn from the concerns of current BIPOC students, allies and others who are members of our campus community,” he said.

He did not specify a course of action to address these concerns.

Boswell explained in this update that the CCI is moving forward and beginning to form subcommittees and reviewing Chancellor DiStefano’s eight actions for change.

“We are energized as the council begins its efforts to transform the academic, research and work experiences for students, faculty and staff who are currently at CU Boulder pursuing their goals — and for the generations to come,” he said in his announcement.

The second failing, according to Shoemaker and Olivarez, is Chancellor DiStefano’s announcement of a Community Safety Task Force.

“I approved a plan to convene the first CU Boulder Community Safety Task Force with the goal of strengthening accountability, building trust and fostering greater transparency and engagement between campus police and the broader university community,” DiStefano said in his announcement.

The task force comes in response to demands from BIPOC students for a University of Colorado Police Department (CUPD) oversight board and comes in conjunction with other efforts by Chief Doreen Jokerst to expand de-escalation training, improve police response to mental health and build greater equity and understanding.

In their memo, Shoemaker and Olivarez criticize DiStefano’s announcement for failing to address that BIPOC students feel unsafe on campus.

They also suggest, in pursuit of antiracism, that a person of color be appointed to hold CUPD accountable, saying, “A community safety task force led by the campus police chief cannot strengthen accountability; there is a conflict of interest when the chair of a committee represents the entity that needs to be held accountable.”

BIPOC student advocates Ruth Woldemichael and Olivia Gardner spent time in conversation with Chief Jokerst but were barely consulted before the task force’s announcement, according to Shoemaker and Olivarez’s memo.

“The narrative of that was kind of taken away from us and controlled and put into this task force where our voices were still left out,” Woldemichael said in a press conference earlier this month.

“Our brief meetings have only led to Chancellor DiStefano and Vice-Chancellor Boswell using the time to frame their narrative when they report to the public when no action has actually been taken. I am disappointed by this, and yet still ask them to work with me to get this right,” Olivarez explained in an email.

In their memo, Shoemaker and Olivarez emphasize this sentiment and continue, “DiStefano and Chief Jokerst’s actions perpetuate covert and structural racism. This type of behavior will no longer be tolerated by the BIPOC community and their allies.”

“I am committed to addressing antiracism, diversity, equity and inclusion,” he said. “I will listen to how my team and I can make our work together better, to reflect upon the input we receive and to better engage all of you in the difficult work to come. I want us to get this right, and that requires us all to lean in and stay in the difficult conversations we need to have in order for our work to be successful.”

DiStefano defends the role of the Council for Community and Inclusion in advancing the goals of the IDEA plan but commits to hearing BIPOC students on campus.

“Whether intentional or unintentional, you must stop this dismissive behavior immediately and instead engage with the BIPOC community on all levels to allow their work to be done,” demanded Shoemaker and Olivarez in their memo.