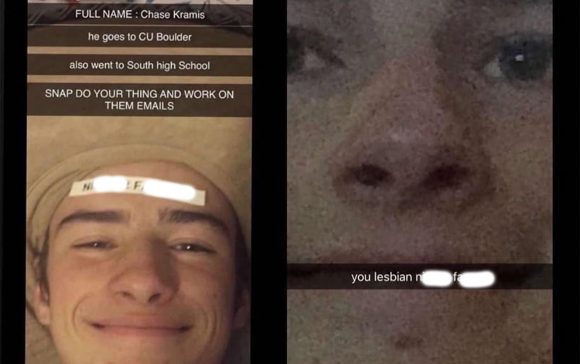 Early Thursday morning, students and community leaders expressed outrage over a series of racist and homophobic remarks made by a University of Colorado Boulder student, Chase Kramis.

Kramis attended South High School, a part of Denver Public Schools, and is now a sophomore at CU.

One of the photos in question shows Kramis smiling with a homophobic and racist slur printed on a label maker and stuck to his forehead. The second is a close-up photo of Kramis’ face with the words “lesbian n***** f*****” written in text. Both photos appear to be sent through Snapchat.

Tay Anderson, the at-large school board director for Denver Public Schools, called for the expulsion of Kramis in an Instagram post.

“This is hate speech and he must be kicked out of the college ASAP,” Anderson wrote.

Later in the day, Anderson issued a statement about the posts and his calls for the university to rescind Kramis’ admission.

“I have heard from the family about the backstory of these images. The pictures were from when this individual was in the 8th grade, several years ago,” he said in a tweet.

Anderson later updated his request, asking that “the individual will go through an equity training before returning to campus this fall.”

However, after a few minutes, Anderson returned to his original position.

“I stand by my original statement from this morning,” he wrote. “Chase Kramis should have his admission to @CUBoulder revoked.”

In an interview, the school board director said that “his actions … didn’t change from 8th grade ’til now.”

Jorge Hernández Arjona, a former candidate for the Democratic National Convention and a youth analyst for Telemundo, was one of the first community activists to decry the remarks.

“Last night, I was just scrolling through Snapchat and lots of my former colleagues from South started sharing this image … this young man was known throughout South High School, and this was shocking news.”

CU Boulder’s Office of Institutional Equity and Compliance did not respond to several requests for comment. However, the official CU Twitter account said that they had reported the photos to the office for evaluation in replies to students who were calling attention to the post.

In early June, a cheerleader was removed from her team after she also posted racist remarks on Snapchat, although they were made during her time at CU. At the time, CU Boulder stated that “racist language and actions on social media are not living the Colorado Creed.”

“I still believe that @CSURams and @CUBoulder have issues they still need to address in regards to the way they handle racism on their campuses,” Anderson tweeted. “Both institutions have been complicit in perpetuating and condoning White Supremacy.”

Melanie Parra, CU’s interim director of communications, said, “We do not want the actions of a few students, in many cases involving social media activity that is several years old, to define the student experience at CU Boulder. Our campus, like many across the United States, has been leaning into the difficult conversations around race in America.”

She did not say if the university was planning to take action against Kramis.