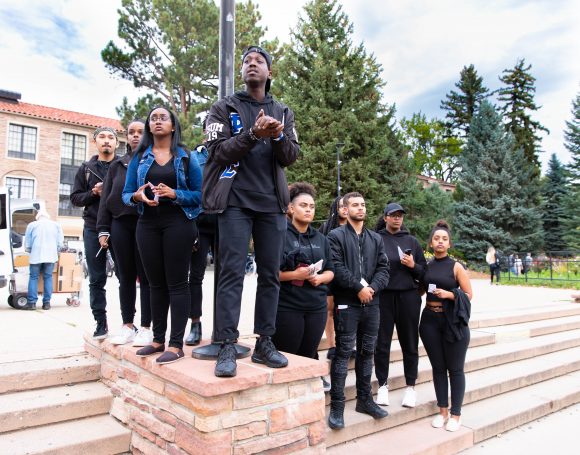 Chancellor DiStefano of the University of Colorado Boulder emailed the student body May 29, reflecting on George Floyd’s death and how it relates to the Black Student Alliance’s (BSA) protests in the fall 2019 semester. He said in the email that he shares the anger and sadness the community feels and that he stands in solidarity with the CU Police Department and the city of Boulder.

“I take heart in how our students have engaged with us over the last academic year,” DiStefano’s email read. “I am committed to diversity and inclusion of everyone on campus.”

A group of CU students feel this isn’t enough.

The students, BSA members Ruth Woldemichael and Olivia Gardner, created a petition with a list of demands to the university. They originally gave the university a window of 24 hours to respond, which closed yesterday. The petition has over 2,500 signatures as of noon on Monday.

Woldemichael is the interim vice president of the Black Student Alliance and an undergraduate student. Gardner is a class of 2020 graduate and co-founder of Transformative Teach, an equity-based organization founded at CU that focuses on fighting the school-to-prison pipeline.

The petition demands that CU Boulder cease partnership with the Boulder Police Department and the Colorado Department of Corrections. It also demands that the university reinvest 1% of its endowment to support businesses run by those who are formerly incarcerated.

BSA originally demanded in its October 2019 letter that the university hold de-escalation and anti-racism training for faculty and staff. This is reiterated in the letter to the university.

“We are tired,” The petition reads. “By that, we mean we have met a profound level of emotional, mental and physical exhaustion from the burdens of a system that has failed our community.”

BSA has been working with several university departments in order to change the university’s equity policies, such as Counseling and Psychiatric Services and the Office of Diversity, Equity & Community Engagement.

Chancellor DiStefano emailed both Gardner and Woldemichael last night. According to Woldemichael, he did not address specific demands but did say he wants justice and to continue pursuing equity at CU and was willing to work with the students.

BSA had been meeting with university officials about increasing equity and safety for all students on campus, but most of them stopped due to the novel coronavirus.

“We saw how fast they made it possible to have academic accommodations in terms of pass/fail classes and the whole online transition, that was very quick,” said Woldemichael. “It’s just interesting to see that they can’t do the same when it comes to the protection of black and brown bodies on their campus.”

The Department of Ethnic Studies has shown support for the BSA petition, calling for action and a decrease in “militarization and funding of police forces.”

“We call on our students, faculty and administration at the university to take a stand against rhge systemic violence and murders that have wrecked black people’s lives in this country since the colonizers arrived,” read a statement from the Department of Ethnic Studies.

“I think the petition is a demand for the university to follow through with actions on the words they’ve been saying time and time after something like this happens,” said recent CU graduate Baylee Stever. “They say they’re committed to diversity and inclusion, but those words need to be followed by direct action to prove they are truly committed.”

All three CUSG tri-executives have released a statement acknowledging the demands and explaining that they stand in solidarity with students.

“Fear, hatred and racism are not, nor will they ever be tolerated to any extent on our campus,” The statement reads. “As student leaders of the largest university in the state of Colorado, we need to set a president of progressive action that will ripple through all other universities and organizations across the state.”