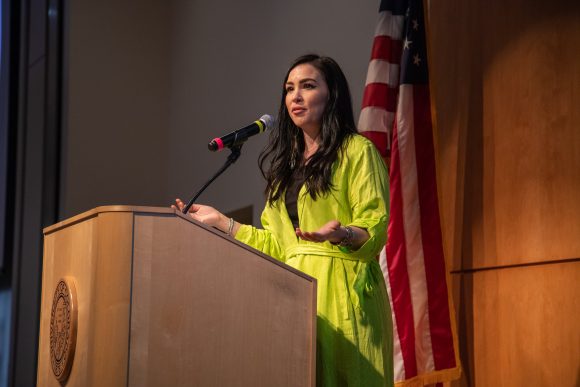 Novelist Kali Fajardo-Anstine, who opened for the Diversity & Inclusion Summit, began with a story of her modest upbringing and how at one point, she did not think she would be able to be a part of CU. Feb 25, 2020 (Hunter Allen/CU Independent)

Tuesday afternoon marked the eighth annual Diversity & Inclusion Summit at the University of Colorado Boulder, organized by the Office of Diversity, Equity & Community Engagement. The summit brought a mix of different events and workshops to the CU Boulder community and members of the general public.

CU Chancellor Philip P. DiStefano initiated the project in January of this year. The project “seeks to communicate to the university community CU Boulder’s rich and complicated history through intersectional perspectives that demonstrate (its) commitment to inclusive excellence and to the deepening of (its) institutional memory.” It is currently in the process of building a committee.

Interim Senior Associate Vice Chancellor of Strategic Communications Jon Leslie, who is helping the start-up facilitation of the project, introduced the talk by emphasizing the project’s aim for “opening up the telling of the history of the university to more community members and to more perspectives (and) identities.” Leslie points to the Los Seis statue as the “genesis” of the project.

Panelist Clint Carroll, associate professor of Native American and Indigenous Studies, advocate of the Indigenous Land Acknowledgment movement and citizen of the Cherokee Nation, noted his aim for the project. He asked for “an acknowledgment that deepening our institutional memory must be more than just an information project; the project must also allow for the necessary structural changes that should follow to address the institutional injustices that the project will inevitably uncover.”

Jasón Romero, founder and co-director of the Aquetza program, said he hoped the project will highlight the histories of underrepresented and marginalized communities on campus. He pointed to the renaming of Cheyenne Arapaho Hall and the bombings of Los Seis as examples of the campus’ hidden histories.

“How do we balance honoring and celebrating, remembering and commemorating and critically engaging with the past?” Paul Sutter, panelist and environmental history professor, asked. “We have to be careful not to conflate them in dangerous ways.”

City Council members weigh in on the past and future

Mayor Sam Weaver and City Council Member Mary Young talked about the historical context behind Council Resolution 1275, a bill that acknowledges that the land Boulder sits on was originally stolen.

Council Resolution 1275 explains the historical relationship between groups in the Boulder Valley. In 1858 the land was taken from local tribes. The bill goes on to explain the history of the Ku Klux Klan, zoning codes and discrimination issues surrounding Penfield Tate II, Boulder’s first and only black mayor.

“It was a process of reading and learning and understanding,” Mayor Sam Weaver said. “White people like me often approach these kinds of situations with fear.”

“You have to do action,” City Council Member Mary Young said. “Talk is cheap.”

“It was a process of reading and learning and understanding. White people like me often approach these kinds of situations with fear.”

Mayor Tate was elected in 1974. Tate advocated for the rights of the LGBTQ community and was met with a recall vote. Although he was ultimately not recalled, he was not reelected either. Both Young and Weaver said that his advocacy has major influences on equality decisions in Boulder.

Gentrification through the eyes of Kali Fajardo-Anstine

“Through the characters in these stories we experience the impacts that gentrification has on neighborhoods that value family, heritage, history, memory and stability,” said event moderator Arthur Aguilera. “As a reader, you get a front-row experience to helplessness and resilience in the face of change.” 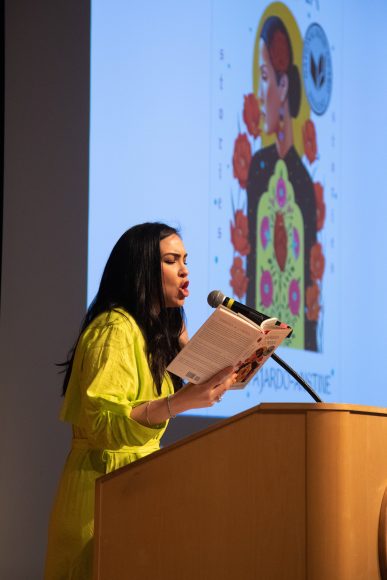 Reading passionately from her book, Fajardo-Anstine channels past experiences and emotions to bring to her audience. Feb 25, 2020 (Hunter Allen/CU Independent)

Irene Aguilar, former Colorado senator, explained that the issue of gentrification was one of the reasons she served in the Senate from 2011 until 2019.

“I think that gentrification is when neighborhoods that were historically occupied by people of color and people of poverty are infiltrated by people who have more means and wealth,” Aguilar said, “and who in the American society are disproportionately white; who raise the property value of those areas such that people who have lower incomes can no longer afford to live there.”

Sigala shared her experience growing up in North Denver, expressing that while the prices of homes have changed, more significant is the “disrespect for the people that were once there or continue to live there — that do not want to give up their homes.”

Deputy City Manager and Interim Director of Planning for the City of Boulder Chris Meschuk offered a definition from the perspective of city planning.

“One term used is colonization of neighborhoods,” Meschuk said. “The result of that is really a change in the economic demographics in that neighborhood and resulting displacement of residents there before.”

Meschuk recalled the 2013 Boulder flood in which some Boulder residents with lower incomes struggled to recover. This prompted him to ask the question, “How can we as local government administrators make sure that we are driving policy in a way that’s gonna create the best outcomes for everyone?”

In response, Boulder changed its case management based on vulnerability index scores to first help those most in need. 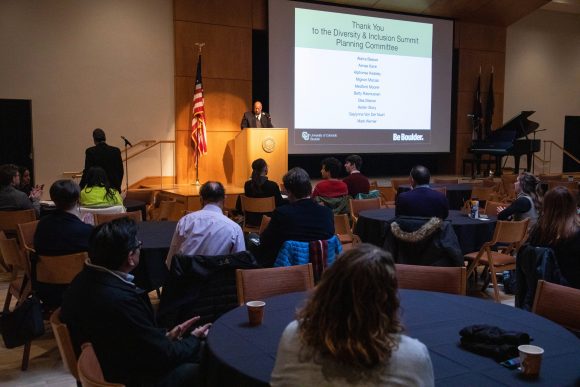 Meschuk’s anecdote demonstrating action in the face of gentrification segued into a conversation around what panelists believe can be done as citizens.

All four panelists championed the idea of having what they called “courageous conversations.”

“I don’t think people realize how powerful our voices are,” Amanda Ruybal, first year, second generation CU Boulder student said. “I think if we unite and use our voices, it is so powerful.”

Claims of a discriminatory tenure case brought back to the light

UMAS y MEXA co-chair Mateo Manuel Vela asked the council members about their thoughts on the demotion of engineering professor Lupita Montoya. Montoya is currently trying to have her tenure case reviewed over claims of race and sex discrimination. Montoya is one of the few racial minority professors in CU Boulder’s College of Engineering and Applied Sciences and has been denied a tenure position and a chance to re-open her application.

“I think it is a wonderful opportunity for the university,” Mayor Weaver said. “Use this incident to insight institutional change.”

After speaking, Clint Carroll yielded his time to Montoya.

“You need to dig down so you can find what the real story really is,” Montoya said. “It is happening right now.”