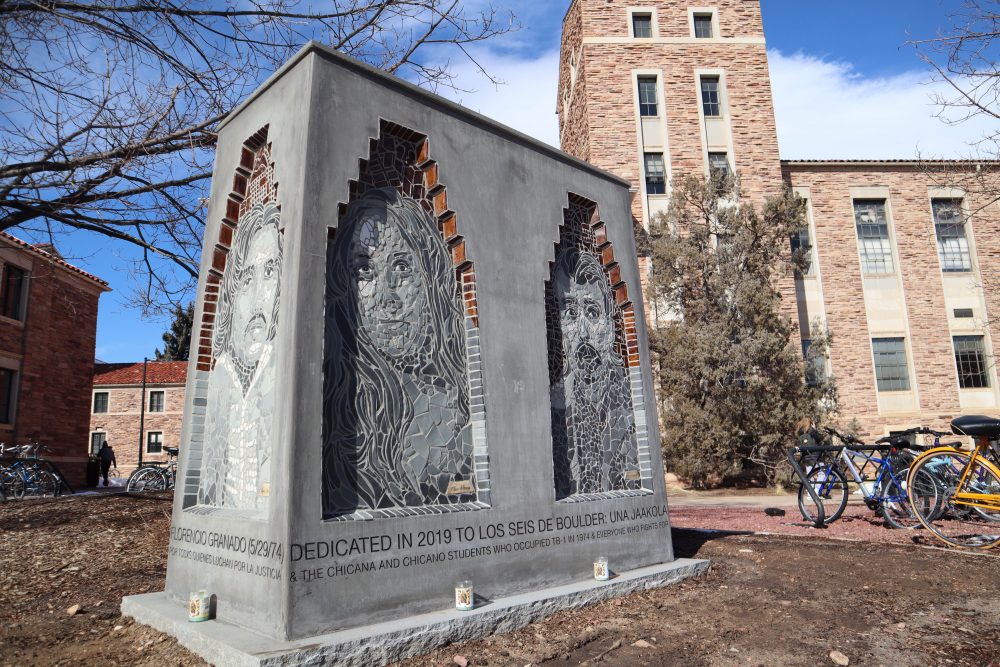 The sculpture, seen here outside of Temporary Building No. 1, is dedicated to six Chicano CU Boulder students and activists who died in the ’70s and is set to be moved on March 5. Currently, a committee is being formed to consider its permanence. Feb. 21, 2019. (Robert Tann/CU Independent)

Editor’s note: A previous version of this story misreported a quote from University of Colorado Boulder Master of Fine Arts student Jasmine Baetz. The story has been updated.

After a month-long extension was granted for a recent memorial sculpture to remain on the University of Colorado Boulder campus, the installation’s time may soon be up.

The 7-foot-tall art piece stands in memorium to six Chicano CU students and activists who were killed in car bombings in Boulder in the 1970s. The six have become known as Los Seis de Boulder. As the deadline approaches for the sculpture’s removal, some students and faculty have said the cultural significance and awareness it has brought the community is too important for it not to become permanent.

“If it’s removed … I think it (loses) its charge and its relevance,” said CU Boulder Master of Fine Arts student Jasmine Baetz, who spearheaded the sculpture’s creation in 2019.

The sculpture stands outside Temporary Building No. 1, which was occupied in spring 1974 by Chicano students for 18 days as part of a protest against the university’s budget cuts to their financial aid. Los Seis died during the same time as the protest. The sculpture along with a small mural tucked away at the base of stairwell 26 in Norlin Library serve as the only two reminders on campus of the victims’ lives.

“If it’s removed … I think it (loses) its charge and its relevance.”

The university’s policy allows for temporary installations for up to 180 days according to CU Boulder spokesperson Deborah Mendez-Wilson. The sculpture’s residency, which began in August of 2019, was set to expire on Feb. 8. But after calls to let the art piece remain, CU Boulder Chancellor Philip DiStefano granted a month-long extension until March 8.

A letter signed by 11 of CU Boulder’s 12 college deans in support of the sculpture’s permanence was sent to DiStefano in December 2019 and asked the chancellor to “send an important message to the Chicanx students on campus, along with other students of color at our university, that our university is working toward becoming a more welcoming environment.”

Sharon Matusik, dean of the Leeds School of Business and the only one not to sign the letter, said in a statement to the CU Independent, “I appreciate the educational value of public art on college campuses, which is why I support the chancellor’s decision to allow the Los Seis de Boulder artwork to remain in place for an additional month.”

Other deans praised the chancellor’s announcement that he would be forming a committee, known as the CU Boulder History Project, to evaluate the potential for student artwork to remain permanent on campus. But it is no guarantee that the Los Seis sculpture will remain in place and currently no committee members have been selected.

“The chancellor’s office is in the process of soliciting nominations, and the committee is expected to convene this spring to commence its work,” Mendez-Wilson said.

A CU Boulder Today article published Thursday said further input on committee members will be sought during a panel at the upcoming spring Diversity and Inclusion Summit on Feb. 25 in the University Memorial Center.

James White, dean of CU’s College of Arts and Sciences, told the CUI he was “surprised to find out there was no mechanism” for evaluating whether an art piece should be permanent or not. He said he is supportive of DiStefano’s initiatives.

White compared social conversation around the Los Seis sculpture to that of the UMC fountain renaming which honored a CU Boulder alum, Dalton Trumbo, who went on to become a filmmaker and free-speech activist.

“We are still talking about it,” White said. “That’s what art does, and that’s what I would hope a piece like (the Los Seis sculpture) would do.”

Lori Bergen, dean of CU’s College of Media, Communication and Information, said in a statement that she is encouraged by the thoughtful dialogue the Los Seis sculpture has sparked when asked why she decided to sign the letter addressed to DiStefano.

The history of Chicano and Mexican-American activism on CU’s campus stems back years before the deaths of Los Seis. Founded in 1968, United Mexican American Students (UMAS) quickly became an established student-activist collective on campus. The student group led coalitions to advocate for increased outreach and retainment of Mexican-American and Chicano students and eventually joined with Movimiento Estudiantil Chicanx de Aztlán to become UMAS y MEXA.

According to the group’s co-chair, Mateo Vela, UMAS y MEXA has been in talks with CU Boulder Student Government to form a resolution that will encourage CU’s administration to make the sculpture permanent.

Apart from physical memorials, multiple community days organized throughout the past 50 years have taken place to remember Los Seis, with the most recent being in September following the sculpture’s installation. Events are set to continue, with Baetz planning this spring to facilitate a second sculpture at 28th and Canyon to mark the second bombing site.

She’s confident that the original sculpture will remain and only continue to cement Los Seis’ legacy.

“Seeing this sculpture moved is not a possibility,” she said.