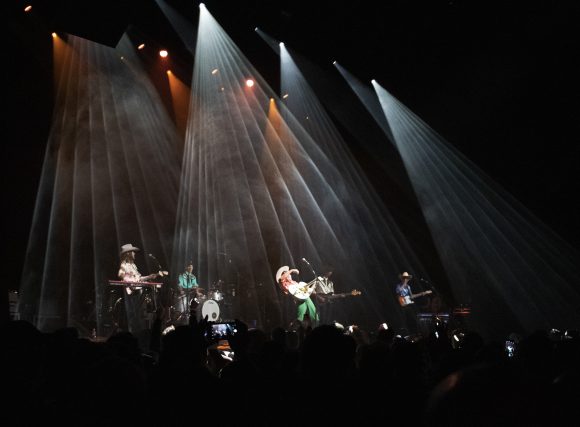 For Peck, however, the music is only half of it.

Peck’s aesthetic covers his real identity behind the fringes of a “Lone-Ranger” hat and mask, recommodifying himself both into and out of the spotlight. The mask has allowed Peck to draw attention to the hyper-masculinity of cowboy culture, breaking down those barriers with costume design and flare. Peck has also been open about his homosexuality, creating a persona that intersects on the very edges of true country music persona.

Peck took the stage on Saturday night dressed in western-wear; sporting cowhide boots, green boot-cut slacks, a pink western yoke shirt and a fringed “lone ranger” mask fastened to a cowboy hat, concealing his face with pink fringes that swayed with his every move. His band wore similar outfits. 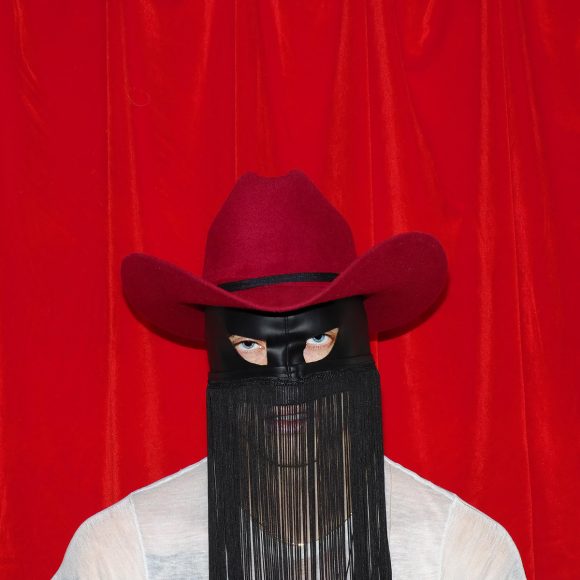 Alongside country-western tropes is Peck’s dynamic vocal baritone. While situated comfortably in deeper notes, evoking ties to Johnny Cash, Peck has the ability to ascend and descend into octaves uncharted for those who establish themselves in that category. His voice becomes the medium to transport feelings of naivety and the uncertainty of relationships come and gone.

At the Mission, Peck exhibited his small catalog of songs alongside confident ease and swagger that his mask provided. Perhaps his most popular song, “Turn to Hate,” captures the essence perfectly of knowing where you do not fit in and the emptiness of goodbyes. He sings, “Don’t leave, don’t cry, you’re just another boy caught in the rye.”

Peck is unique. Often grouped within the same category of his country music counterparts, his country grounded aesthetic strays far beyond the norm.

Peck’s first and only album “Pony,” branches off into further niche genres of shoegaze and alternative-punk/country. His persona along goes hand in hand with music that capitalizes on country-western aesthetic, music that could have been taken directly from Clint Eastwood’s, “The Good, the Bad and the Ugly.”

Higher points in the evening revolved around Peck’s interaction with the crowd. Before announcing that he would be playing a cover of Gram Parson’s “Ooh Las Vegas,” Peck exclaimed, “If you don’t know this song, you better be dancing.” Peck and his crew then segued into the upbeat country-rockabilly jam, where guitar leads and solos were emulated in telecasting country twang.

Peck showcased new music and capitalized on the old, ending the evening with “Take You Back (The Iron Hoof Cattle Call),” a simple song played in double-time, highlighting the small town intricacies of love and the cycle of relationship regret. In traditional fashion, before the song ended, Peck acknowledged his backing band to applause and waved to the crowd before waltzing offstage.

Peck left the Mission on good terms; inspiring audience members to ride off into the sunset, Peck queued for the entirety of the journey. The singer will continue to tour through 2020, more information can be found here.