Leaving AAA hockey behind, Brad Huggins is carving up the ice at CU Boulder 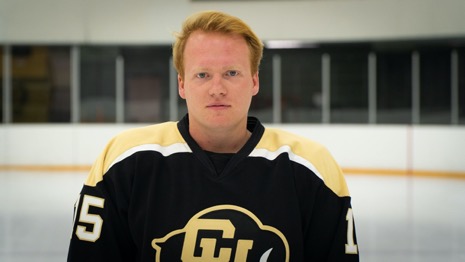 Brad Huggins’ first experience with hockey didn’t even involve any ice. The 21-year-old University of Colorado Boulder junior, who plays left wing on the university’s men’s club hockey team, discovered the sport when he played street hockey with his cousins at a young age. Living in London at the time, Huggins picked up roller hockey and, by age seven, was in love with the game. Soon he traded in his roller skates for blades.

“He’s very good at moving the puck, moving his feet, creating plays in the offensive zone … he generates a lot of offense for the team,” said CU Boulder junior defenseman Carter Yang.

Now, Huggins is second on the team in goals scored with 12 goals through 17 games played. But his career at CU Boulder got off to a later start, as Huggins came to the university only after leaving behind a premiere hockey track.

“I started playing roller (hockey), and then one of my coaches got me to play ice hockey … I eventually ended up playing for the Thunderbirds, which is a AAA program here (in Colorado),” Huggins said.

The elite Colorado Thunderbirds take players ranging from 10 to 18-years-old. Their aim is to provide extra coaching and development to players hoping to play at a high level, such as NCAA Division I or in the National Hockey League. They have multiple alumni in the NHL, including Anaheim Ducks forward Troy Terry and Boston Bruins defenseman Brandon Carlo.

But after half a season with the program, Huggins decided he wanted to go to college. He started at CU Boulder in spring 2017.

“When I was younger, I wanted to play NCAA hockey … I still love it the same, it’s just different now, I kind of have different interests,” Huggins said.

He said there are risks and rewards to spending four years after high school playing junior hockey.

“You can play four years of juniors and still not make it, and then you have to start college when you’re 21,” he said. “So yeah, I just decided to take a different path.” 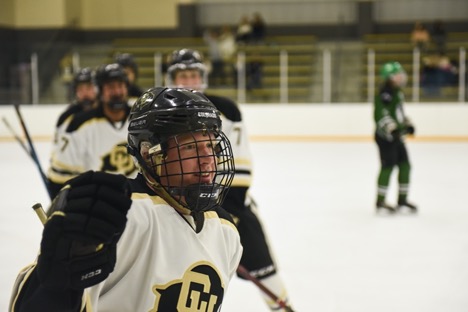 Brad Huggins celebrates after scoring a goal during Colorado’s 11-0 victory over Utah Valley University on Oct. 18, 2019 in Boulder. (Zach Ritenour)

It’s a path that Huggins said led him to a team full of camaraderie.

“I’m happy where I am now,” Huggins said. “I love playing for this team.”

Even off the ice, Huggins said spending time with his teammates can be just as fun as the actual game.

“This is my third year playing and this is definitely my favorite group of guys,” he said.

For his teammates, Huggins brings a lively spirit.

“Oh, he’s a goofball in the locker room,” said goaltender and Huggins’ roommate Charles Goetzky. “Always joking around, having a great time.”

For Huggins, he appreciates playing at a Division II club level which he said gives him more flexibility.

“Obviously we want to win, but at the same time it’s not like our whole life is dedicated to this,” he said.

After college, Huggins hopes to pursue a career as a sports psychologist.

“I think it’s really cool to go back and help people with the mental aspect of the game … (with) more research and everything being done we are realizing how much the mental part of the game affects how you play,” Huggins said.