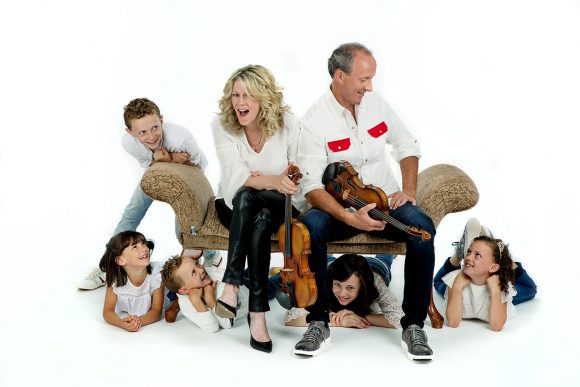 MacMaster and Leahy, who have been married for 16 years, are a formidable musical duo. MacMaster, a Nova Scotia native, is a world-renowned Celtic fiddler and has collaborated with notable musicians, including Yo-Yo Ma, Bela Flek and Carlos Santana. Her uncle Buddy MacMaster, known as the “King of the Jigs,” was also a renowned fiddle player from the 1940s until his death in 2014.

Leahy, an Ontario native, also has deep musical roots. As a child, Leahy toured internationally with his 10 other siblings as The Leahy Family. The siblings performed traditional Celtic and folk songs complete with fiddling and step-dancing. The group has received two Canadian JUNO Awards and appeared in the Academy Award-winning 1985 documentary, “Leahy: Music Most of All.”

Seeing MacMaster and Leahy was an exhilarating experience. The music kept coming, nimble, rhythmic and joyous, a steady flow of energetic jigs punctuated with lightning-fast improvisations. The warm energy of the two fiddlers and their children spread through the auditorium and the show felt like an intimate holiday party among the 2000 Boulder guests.

The duo sped through their early songs, starting with “Angels We Have Heard on High,” and then seamlessly transitioned into a medley of “Joy to the World,” “Sleigh Ride” and “Midnight Clear.” Then came several solos with MacMaster’s lovely “Traditional Medley” of Celtic songs and Leahy’s dramatic “Indifference” and devilishly fast “American Polka.”

In the solo sets, MacMaster and Leahy’s distinctive styles emerged. MacMaster’s Cape Breton style is usually highly accented and energetic, featuring animated step dancing and bouncing around the stage. For her “Traditional Medley,” however, she opted for a calmer take, sitting down and letting the expressive tunes flow through her. Leahy’s playing stayed spirited. His style leaned towards the theatrical, abruptly changing dynamics, from a delicate bass murmur to squealing high notes. In “American Polka,” he showed his flair for virtuosity in the improvised solos, breakneck notes blurring into a mass of folk riffs.

Following this, five of the couple’s seven children joined their parents on stage. The children, whose ages range from 7 to 14-years-old, seemed at home onstage as multitalented performers, continuing the Leahy Family legacy. They continue to tour with their parents and have performed on NBC and international television shows. They play the fiddle, keyboard, accordion, drums, sing and step-dance.

While at times the children’s playing wavered with unclear rhythm and pitchy fiddle notes, their commitment and confidence astonished, especially with their step dancing. Their feet flew across the stage, their tap shoes continuously clicking and clacking to the fast beats. Their eldest daughter Mary Frances and eldest son Michael emulated with the parent’s stage presences; Mary Frances wore a sparkling golden dress and danced lithely and elegantly, while Michael had a flair for showmanship, showing off with grand slides and suave movements.

Part of MacMaster-Leahy family’s success is the certainty of the reaction they inspire: excitement, joy and desire to get up and dance, all hallmarks of great Celtic music. With their unique celebration of “A Celtic Family Christmas,” they invited the audience into their musical world of step-dancing and late-night fiddle-filled celebrations, the perfect merry and convivial holiday celebration.

More information about MacMaster and Leahy can be found here.