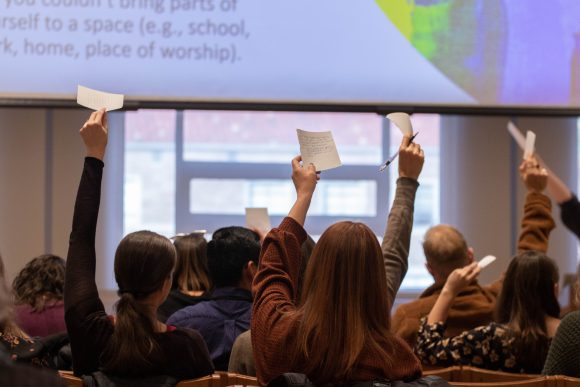 Attendees of the session participate in an activity during it at the University Memorial Center on November 12, 2019. (Kara Wagenknecht/CU Independent)

This Tuesday and Wednesday, the 29th Diversity & Inclusion Summit took place in the University Memorial Center, with session topics ranging from learning about diversity through dance to fighting white supremacy. For the second year in a row, the summit focused on a theme of intent versus impact.

“Sometimes, there is a gap between what we intended and the impact we caused,” the Office of Diversity, Equity & Community Engagement’s webpage on the Diversity & Inclusion Summit reads. “How might we engage our ears to listen, our minds to strategize and our hearts to act as we work on closing the gaps?”

Tuesday, Alaina Beaver, initiatives director of social climate strategy, and Jon Leslie, interim senior associate vice chancellor of strategic communications, spoke about the IDEA Plan, CU Boulder’s plan for promoting diversity and inclusion that has been in the works for four years. They said the plan is now being implemented.

Beaver and Leslie discussed the three key goals of the plan: climate, infrastructure and leadership.

“It takes a village,” Beaver continued. “Literally and figuratively. We all need to be working together on this puzzle of social climate.”

During the feedback segment of the event, elementary education sophomore Kylah Garcia suggested that further emphasis on scholarships could attract a diverse range of students aside from “(upper) class white people.”

“Even though I’m white, I don’t come from an upper-class background,” Garcia said. “The reason I’m here is because I was able to get financial aid.”

Beaver said to achieve the plan’s goals CU will move away from jargon-heavy phrases like “we’re in strategic planning mode,” to real action.

“Once we have a sense of our forward direction, we need to capitalize on that momentum and actually move forward in doing things that are in alignment with our goals,” she said.

Further coverage from the CU Independent on the IDEA Plan can be found here.

Looking at Diversity & Inclusion through an intersectional lens

Speakers Dr. Elena Sandoval and Dr. Johanna B. Maes – authors of the book “Case Studies in Equity, Diversity & Inclusion in Higher Education” – taught students and other audience members the importance of these three factors in society Wednesday afternoon in a session of the same title.

Sandoval and Maes noted that intersectionality is a term “that guided the work that (they did) as professionals,” and they “were conscious about how they presented (the) issues in the book.”  The book covers different case studies in which people from different nationalities or sexual orientations had uncomfortable and unpleasant experiences during their college years.

The Merriam Webster Dictionary defines intersectionality as “the complex, cumulative way in which the effects of multiple forms of discrimination (such as racism, sexism, and classism) combine, overlap, or intersect especially in the experiences of marginalized individuals or groups.”

Instead of taking the entire hour to speak, the speakers started off by asking everyone in the room to introduce themselves, their identities and how their identities interact with their lives.

One of the main goals of the session, according to Dr. Maes, was to help people understand how their identities interacted with their lives.

Great diversity existed among audience members. Latinx, Native American and Asian (Indonesian, Chinese, Korean and East Indian) audience members came to participate and listen to the speech. This exemplified that even though CU Boulder is considered to be a predominantly white campus by many, there are still several students who have different ethnicities and nationalities.

“Even when we don’t think that the diversity exists, it does,” CU student Zach Volheim explained at the end of the speech. “(Knowing) how to work together is important, and I think it also brings a lot of different viewpoints and opinions in to (make) society (better) as a whole.”

Nii Armah Sowah and Beth Osnes teach a course on performance and community engagement and along with their students led a workshop exploring diversity through dance Tuesday afternoon. Sowah is a Ghanaian-born educator and has taught master dance classes around the world. Osnes is an assistant professor and director of graduate studies in the theatre department.

Techniques used in the workshop included a game where participants learn how a slight shift in culture can have huge effects on other communities.

Donnelly, Randall and Cole began the workshop with a skit portraying how to approach friends who may need emotional support. This was followed by several activities centered around self-care and compassion, including an activity where participants paired up and wrote haikus about how they have overcome adversity in their lives.

This was the first Diversity & Inclusion Summit session any of the students had facilitated. Ostheimer, Randall and LeBlanc said that they came into the experience with minimal foresight — some students had never attended the summit before — and had to improvise parts of the workshop.

“After this experience, I have a lot more (workshop) ideas,” Randall said.

Plenary speaker Dr. Evelyn Schlatter spoke on the most effective ways she has found to fight white supremacists and hate groups. She told student activists and others who are passionate about fighting hate that protests might not be the most useful tool, but instead, she told would-be protests to work to take away hate group’s “hot air.”

She said giving attention to hate groups through certain types of protests may end up counteracting the intent of the protest and instead give hate groups stamina. Instead, she said it is better to criticize the group.

“Just don’t be a douche,” Schlatter said. “Take away their hot air because confrontation is not always what you want.”

Teaching tolerance is one of the best ways to end hate according to Schlatter.

Schlatter also directed comments to faculty who may not know how to diffuse tense situations when racial issues arise. It is important for the administration to respond to students when they protest so they can collectively work together to create a hate-free campus. Having a conversation between all members of the campus community is vital, she said. Without the students paying tuition, and without professors teaching, there is no university. 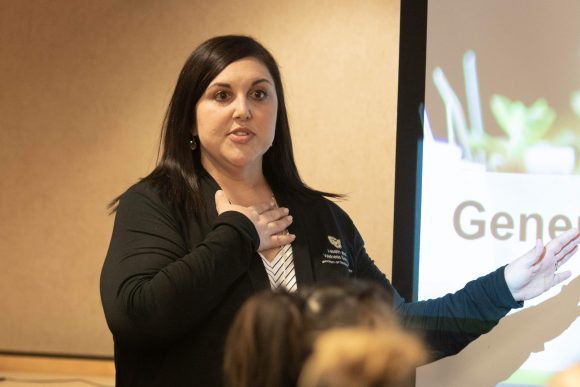 Jennifer McDuffie addresses the audience at the beginning of her session about Generation Z at the University Memorial Center on Nov. 13, 2019. (Kara Wagenknecht/CU Independent)

Wednesday afternoon, Associate Vice Chancellor for Student Affairs Jennifer McDuffie spoke about the new opportunities and challenges that arise with Generation Z students, defined in the presentation as students born between 1995 and 2010, although other sources use site other date ranges for the start date of the generation.

“Multitasking” for Generation Z students, McDuffie said, means interacting with up to five screens at once.

“I want you to imagine an earbud or an Airpod in one ear, laptop up, cell phone next to you, conversations happening around you that you’re participating in and a TV going,” McDuffie said. “It happens all the time.”

Generation Z students spent 41% of their time outside of school with computers or mobile devices. Teenagers who spend three hours a day or more on electronic devices have a 35% higher risk of suicide, McDuffie said, referencing an article from The Atlantic.

However, not all is grim, McDuffie noted. Generation Z students are particularly good at embracing concepts like intersectionality and parts of people’s identities like ethnicity and sexual orientation.

“They will probably be the most accepting generation we’ve seen,” McDuffie said.