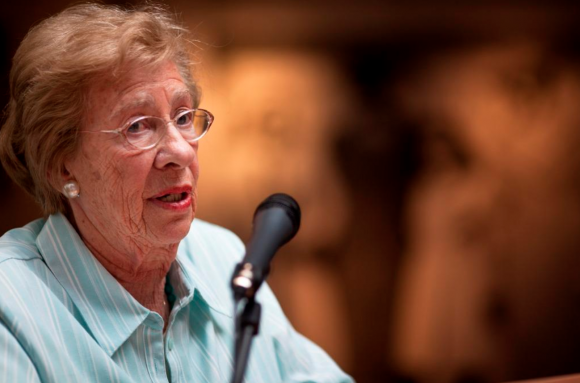 “For us Jewish people, we were very scared,” Schloss said, who at the time could not imagine how quickly her life would be changed.

Invited by the University of Colorado Boulder’s Jewish Student Association and Cultural Events Board, Schloss, the step-sister of Anne Frank, spoke to hundreds in CU’s Glenn Miller Ballroom Wednesday night. She retold her experience of surviving the Holocaust as a child, beginning with the end of her tranquil life in Austria.

After Vienna fell to Nazi occupation, Schloss, along with her brother, mother and father, fled to Amsterdam. There they met Otto Frank and his daughter, Anne, who Schloss befriended for a brief time. It seemed to Schloss that life may return to normal, but it “all came crashing down” once the Nazis threatened to bomb the Netherlands. Schloss and her family were forced to split up, her father taking her brother while she stayed with her mother. Her father told her it was their “best chance for survival.”

“I started to cry,” Schloss said. “I was 13 years old and I think that was the first time that I really realized that it might be a matter of life and death.”

Schloss said that she and her mother moved about seven times to different places that were willing to house them. Two years later, on the day of Schloss’ 15th birthday, she was given a parcel by her host. But before she could open it there was a knock at the door and suddenly Nazi officers stormed inside.

Swept away to an interrogation room, Schloss remembers seeing a large picture of Adolf Hitler hanging on the wall while two Nazi officials interrogated her, a sharp light beaming on her face. They told her they would kill her brother if she did not reveal who had been hiding her and her mother.

“I was 13 years old and I think that was the first time that I really realized that it might be a matter of life and death.”

“I was in shock,” Schloss said. “I knew this was probably the end of my life.”

Eventually, the Nazis released Schloss to her family and transported the four of them by train, or as Schloss called it a “container,” to Westaburg, a holding camp in the Netherlands. From there she and her family were sent to Auschwitz, the last time the four of them were all together.

Schloss said she and her mother were put to work in Birkenau, a concentration camp for women roughly a mile from Auschwitz.

As soon as they arrived at Birkenau, they were stripped of their clothes, had their heads shaved clean and their names replaced with a number. They slept in bunk beds filled with bed bugs and lice. Their food was “liquid muck” that stopped them from menstruating, and they were given just one piece of bread per day.

Schloss explained that the most difficult time in the camp was the winter. Her toes were frozen, she lost her shoes and she could barely walk. She was “nearly giving up,” especially after being separated from her mother thinking she would never see her again.

But shortly before the camp was liberated in January 1945, Schloss and her mother were reunited and the two escaped to Odessa, Ukraine, to wait out the war. Schloss said her father and brother never made it out of the camps.

The two returned to Amsterdam, where they were reunited with Otto Frank, whose only piece of his family he still had left was his daughter Anne’s diary.

While Schloss’ story carried a somber tone for most of the evening, she did provide the audience with a hopeful message about her life continuing after the camps.

As time passed, Schloss met a young man who became a good friend, and after six months he proposed to her. While at first worried she would be leaving her mother alone, she eventually accepted the proposal after her mother told her she and Frank were getting married, making Schloss Anne Franks’ step-sister. Her and her husband married around the same time as her mother and Frank.

“We had three daughters and five grandchildren, and so life went on again,” Schloss said to audience applause.

“Hopefully sharing her story will get students to talk about it,” Shmueli said.

Some student audience members felt Schloss’ story struck a personal chord with them.

“My great aunt survived Auschwitz as well, and so when I was five, I asked her what her tattoo on her arm was and she told me everything and it really resonated with me,” said senior Daniel Gutman. “Ever since then I knew I couldn’t let the flame die.”