CU’s new diversity plan: What you need to know 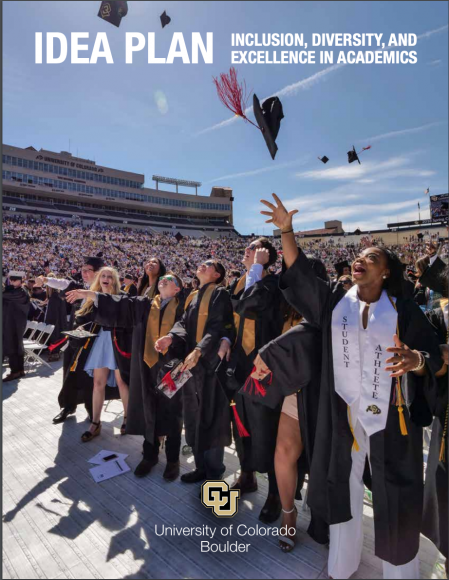 11/15/19: This article has been updated to include a statement given by CU Boulder Deputy Spokesperson Deborah Méndez-Wilson.

The long-anticipated final draft of the IDEA Plan has officially received its stamp of approval from University of Colorado Boulder Chancellor Philip DiStefano — almost four years after the concept for a more welcoming campus for all had originally been proposed. The Inclusion, Diversity, and Excellence in Academics (IDEA) Plan is what CU characterizes as its “blueprint for diversity, equity, and inclusive excellence.”

The plan comes after years of false starts. In Summer 2017, CU Spokesman Ryan Huff told the CU Independent the plan, then called the Diversity, Inclusion and Academic Excellence Plan was “currently in the implementation phase.” Later, Vice-Chancellor Robert Boswell told the CUI the university hoped to finalize the plan by Spring 2018. Previous versions of CU’s diversity-oriented webpage had touted deadlines long since missed, the CUI previously reported.

Now, in Fall 2019, the plan arrives four years after Distefano originally announced the formulation of the plan following a scathing climate survey that showed students of color felt unwelcome on campus. In 2017, the CUI published an investigation into racial hostilities on campus that also examined the early stages of the plan.

What is actually in it?

While many recommendations are highlighted throughout the 51-page document, the plan is centered around IDEA’s three key goals: climate, infrastructure, and leadership. The recommended plan of action to achieve these goals are center on moving the process of increasing diversity of the faculty, staff and student-body from the “periphery” to “core institutional functioning.” This means that diversity initiatives should be taken at all levels of CU’s organization. The plan states that faculty “must have access to training, tools, and techniques to enhance inclusivity in pedagogy, hiring, and climate.”

“Our plan will put accountability for diversity and inclusion at the center of our day-to-day work,” Deputy Spokesperson for CU Deborah Méndez-Wilson said. “This will be long-term, impactful work to permanently instill these values into all of our efforts and in every corner of our campus.”

Much of this is boiled down to the acronym CLIMB:

Beginning in 2017, a total of 28 students and faculty members were appointed to both author and revise the plan over a period of 18 months, with Initiatives Director of Social Climate Strategy Alaina Beaver as the committee facilitator.

In an attempt to simplify the plan, Beaver explains, “It spells out our collective values, our goals, and some actionable areas of recommendation.” She added it’s meant to be updated on a regular basis to evolve with CU’s ever-changing population and demographics to more effectively serve the needs of what she calls “our real community.”

“Our student population will not look the same in ten years as it does now,” Beaver said.

The Statement of Need, a statement prefacing IDEA’s plan of action, addresses what CU deems as the campus population inadequately reflecting “the full diversity of local and national communities.” While acknowledging this fact, it stresses a greater need to not only “recruit and retain,” but ensure that all students and faculty are included and supported throughout their time at CU.

How will it be implemented?

“We’re actually going to start moving past being all talk, which is kind of how it has felt for a little while,” Beaver said during an event at this year’s diversity summit. “Important talk. Not to minimize the talk.”

Beaver acknowledged the amount of time that the IDEA Plan has taken to reach implementation.

The plan outlines the development of the Council for Community and Inclusion (CCI), which will be responsible for implementation. The CCI will work with the Office of Diversity, Equity and Community Engagement (ODECE) to oversee the implementation of the plan. An “implementation strategy” is being made by head of the ODECE Robert Boswell, Assistant Vice Chancellor Merna Jacobsen and other faculty members.

Recent CU psychology graduate Abby Tracer, who attended the talk, is hopeful but has a “healthy dose of skepticism” about the plan.

“I just want to hear more from our leadership,” Tracer said. “I think it’s important to speak when we have the opportunity, especially from a student perspective.”

CU’s diversity plan webpage indicates that CU is currently in the process of “(cultivating) partnerships for long-term, iterative growth according to the IDEA Plan’s goals and recommendations.” Thursday, Beaver and Jon Leslie, interim senior associate vice chancellor of strategic communications, elaborated on the next steps for the plan at the diversity summit.

“Once we have a sense of our forward direction, we need to capitalize on that momentum and actually move forward in doing things that are in alignment with our goals,” Beaver said.

She stressed collaboration across departments and with administration to make “real progress.”

A report on the plan will be submitted to the CU System, which requires that each campus submit a report on “diversity, equity, inclusion and access activities.”

“When you want something to be great, I think it’s important to be critical of it,” Tracer said.