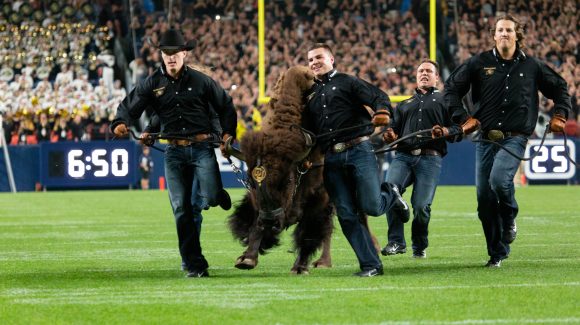 For the majority of the past twelve seasons, Ralphie V has been the University of Colorado Boulder’s live buffalo mascot, helping continue a 53-year-old CU tradition. On Tuesday, Athletic Director Rick George officially announced that Ralphie V will be retired. Her final appearance will be as a spectator during Colorado’s final home game against Washington on Nov. 23.

“Ralphie V has served the department and the university well,” George said in a CUBuffs.com statement.  “She has been a very special buffalo and has truly been adored by many.  We hope she lives for many years to come and look forward to finding her successor.”

In October, Ralphie V celebrated her 13th birthday alongside her handlers and a companion buffalo. As CU students and football fans are well aware, Ralphie V missed the last two home football games against USC and Stanford. But rather than a situation of declining health for Ralphie, the opposite appears to be true.

“She has been a very special buffalo and has truly been adored by many.  We hope she lives for many years to come and look forward to finding her successor.”

According to Ralphie V’s veterinarians and handlers, the speed of Ralphies of past years typically decreases with age, but not so much with Ralphie V. As she grew older, her excitement increased, leading to her running at speeds too fast and too dangerous for the handlers and herself, according to veterinarians.

Ralphie V had begun to struggle with responding to cues consistently, the main reason why she missed the last two games. While home and away fans alike love the spectacle of Ralphie running, most can agree that if Ralphie was to break loose of her handlers, it could be quite dangerous.

“Ralphie V had an outstanding career as the face and symbol of our great university and athletic department,” said John Graves, Ralphie Program manager since 2015 and a one-time handler. “Ralphie V was our first Ralphie to serve in the age of social media. Thanks to her, we were able to incorporate an educational aspect to the Ralphie Program and hundreds of thousands of fans were able to meet her and learn more about her and buffalos in general, while countless more learned via social media.  As one of the biggest and fastest Ralphies, her love for running and power was showcased every home game during her career.  It’s almost like she knew she was the queen of campus and she loved to show that fact off when she ran onto the field and at her public appearances.”

Ralphie V lead the team out of a tunnel during the 2016 Alamo Bowl in San Antonio as well as on 10 different occasions in Denver and 65 times at Folsom Field for a total of 76 appearances. It’s the second-most appearances by any Ralphie, sitting just behind the original Ralphie who ran 78 times over 12 seasons. Ralphie V was held back from running only seven times over her career.

“It has truly been an honor to care for and work with Ralphie V the past 13 years,” Graves said.  “Being able to see her and spend time with her each and every day is the best part of my job.  She has such a fun and energetic personality, and while I will miss her leading the team onto the field, I still have the privilege of being able to spend time with her every day at her ranch.”

Ralphie V is expected to be replaced by a new buffalo for the 2020 season.

The Buffaloes will host the University of Washington Huskies on Saturday, Nov. 23 for senior night. The time is still to be announced.