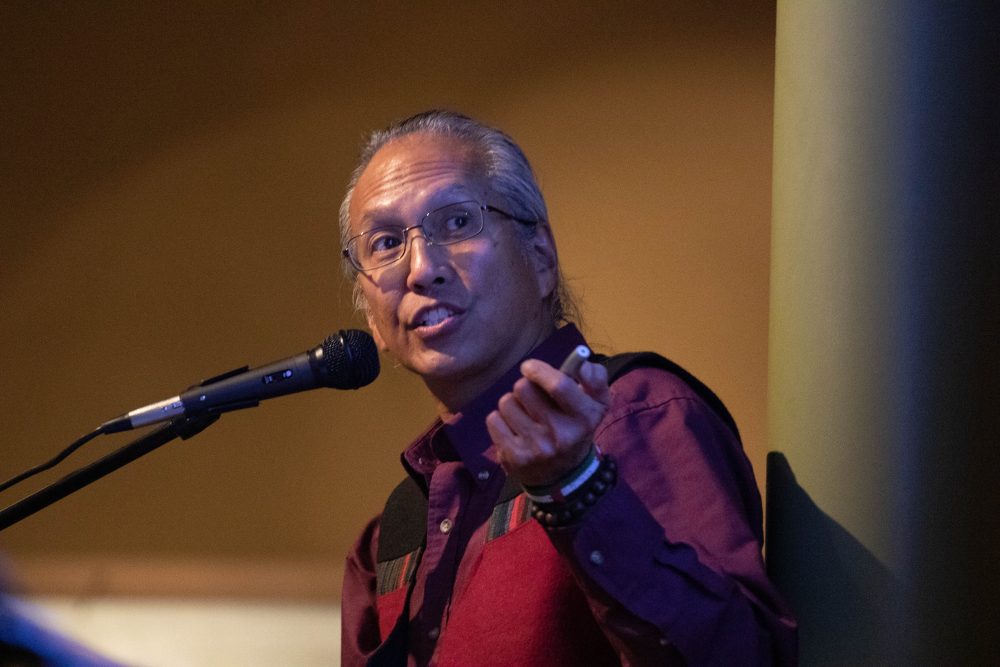 Lam introduced the phrase “Mitakuye Oyasin” from the Lakota language, which roughly translates to “we are all related.”

This phrase, Lam said, “comes from the indigenous understanding that all life is sacred. All life is interconnected.” It also speaks to the importance, he said, of “recognizing the intersectionality of environmental justice, social justice (and) racial justice.”

Lam touched on many different facets of environmental justice and injustice, such as agriculture, the military-industrial complex and hydraulic fracking. He spoke first about Standing Rock, which he had the opportunity to visit three times during the Dakota Access Pipeline protests beginning in early 2016.

During this time, protesters attempted to block the construction of a pipeline transporting oil from North Dakota to Illinois, which runs underneath the Missouri River as well as through a sacred burial ground. The Standing Rock Sioux relies on this river for their drinking water, and any oil spills from the pipeline run the risk of tainting this water.

“Mni Wiconi,” Lam said, a Lakota phrase which translates to “water is life.”

The peaceful protesting of Standing Rock, Lam said, was met with high-pressure water cannons from a militarized police force.

Lam made several connections between environmental turmoil and the forces of capitalism. In the case of Standing Rock, for example, the police force was indebted to both the Dakota Access Pipeline and Energy Transfer Partners.

He also argued that corrupt politicians must be displaced by people who are well-intentioned, name-dropping several figures. For example, Dick Cheney exempted fracking from safety standards outlined in the Clean Air Act, Clean Water Act and Safe Drinking Water Act.

Voting in its current state won’t do enough to displace corrupt politicians, Lam argued, because of the rigging of voting machines and a “false right-left paradigm.” No matter which party we vote for, Lam said, its candidates will likely be beholden to corporate interests over environmental sustainability.

Indigenous people have officially played a part in UNFCCC since 2000, Gottschalk said.

The Conference of the Parties is a conference that negotiates and advances the implementation of UNFCCC. The 24th Conference of the Parties (COP 24) resulted in an agreement on a “Paris Rulebook,” or a set of rules on how climate change policy is to be implemented by participating nations in line with the Paris Agreement. The Paris Agreement is an extension of UNFCCC and “an international agreement to undertake ambitious efforts to combat climate change and adapt to its effects.”

The rulebook “acknowledges that adaptation should be based on and guided by the best available science, and as appropriate, traditional knowledge, knowledge of indigenous peoples and local knowledge systems.”

The next step, Gottschalk said, is to secure indigenous peoples’ rights in the Rulebook during COP 25 in Madrid, Spain.

“There’s going to be a lot of research that needs to be done about traditional knowledge and how it can help address the climate change catastrophe that we’re facing,” Gottschalk said.