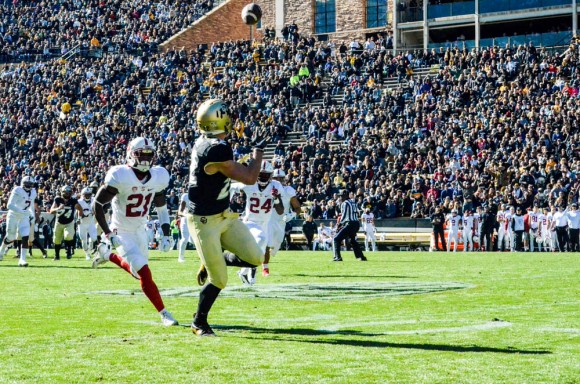 Homecoming weekend is typically a time of fun and celebration, but for the University of Colorado Boulder’s football team, it’s a time of desperation as they host Stanford.

After dropping their last five games, the Buffs are one loss away from not being eligible to play in a bowl game for the third straight season.

One of the biggest surprises of CU’s losing streak has been their struggles on offense. Colorado scored an impressive 37 points per game in their first five games, but that number has plummeted to 14.5 in their last four. In that span, the Buffaloes’ passing game has been inconsistent, they’ve struggled to run the ball and penalties have become a common occurrence. Senior quarterback Steven Montez believes it will take a collective effort to get the offense rolling again.

“We’ve got one of the best offenses in the nation when we actually execute,” Montez said. “We’ve got to do a better job of that. It’s not just one position, it’s not just a group of guys, it’s a little bit of everybody.”

The good news for the Buffs is that two of their final three games are at home. They have a good opportunity to turn things around against a Cardinal team who only has one road win this season. Part of Stanford’s road troubles has been their defense who have surrendered 263.5 passing yards a game this season. With better execution, Colorado believes they can get back to form against Stanford on Saturday.

“It’s not just one position, it’s not just a group of guys, it’s a little bit of everybody.”

On the other side of the ball, it would be an understatement to say that the Buffaloes have struggled defensively this season. CU’s passing defense ranks second to last in the NCAA by allowing an average of 316 yards a game and opposing teams having rushed for over 100 yards against them in their past four games. Despite their rough performance this season, Colorado defenders still have optimism that they can improve.

“I think we just need to play harder and play smarter,” said senior outside linebacker Nu’umotu Falo Jr. “At the beginning of the year, we had guys all over the place making plays, and when the ball came out, there were guys there to get it. I think we just need to get back to our groove and get back into what we do best, as far as getting the ball out.”

The Buffs winning three straight games and making a bowl game would be unprecedented given their inconsistencies throughout the season. The team hasn’t won three consecutive games since the start of the 2018 season and their recent play suggests that it is unlikely to change. However, players and coaches are grateful to still have a chance to make up for a disappointing season.

“We have to focus on what’s in front of us right now and keep moving forward when it’s all said and done,” Falo Jr. said. “Starting with practice, getting extra film, taking care of our bodies and stuff like that. I think it’s really important to all of us, just because we know the situation we’re in with trying to get to a bowl game.”

The Buffaloes will host Stanford on Saturday at 1 p.m. MST at Folsom Field.