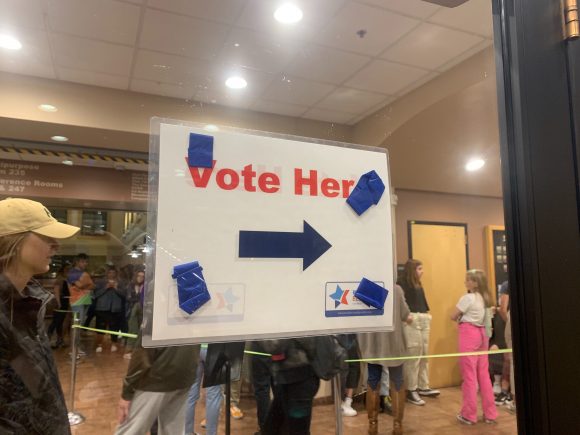 Students stand behind a vote sign as they wait to cast their ballots in the November elections today. (Anna Haynes/CU Independent)

As the polls came to a close at 7 p.m. Tuesday night, last-minute voters lined up at the polling center in the University Memorial Center. Some voters stopped to speak with the CU Independent about the value of voting.

“I always vote because it’s important if you care about anything that involves taxes, like roads or schools or even air (clarity),” said Taylor Shank, a senior majoring in marketing.

“If you want a better future in any capacity, if you have any expectations or hope for anything in the future to change, you need to vote,” Shank said. “I don’t really understand people who don’t vote, to be honest.”

Voter Erin Geering spoke to the importance of female voters.

“A lot of people don’t realize how long it took women to have the right to vote,” Geering said. “For women especially I think it’s really important to take notice of issues of the day and exercise our civic duty.”

“My voting record is spot-on. I’ve never missed an election,” Jaime Sandberg, who graduated from CU in May with a degree in speech, language and hearing sciences, said. “It’s important to take advantage of (voting) when you can, because we only get it once a year.”

“(Voting is) my duty as an American citizen right now,” Samuel Eaton, a senior majoring in advertising and studio art, said. “It’s getting me more stoked for (elections) in a year.”

Sandberg was particularly surprised about negative responses to Ballot Measure 2G, which calls for a tax of up to 40% on tobacco vaping products. Many people, she said, believed that “those small luxuries shouldn’t be taxed.”

Eaton is usually opposed to penalizing things like vaping, he said, but he and Sandberg agreed that because of its popularity among middle schoolers, the price should be increased.

“Their allowances will pay for it now,” Eaton said.

Eaton challenged the common conception that one vote doesn’t matter. “Look at who’s in the White House,” he said.

Sandberg agreed. “The only say you have in anything is your vote,” she added.

“Don’t take for granted the opportunity to take part in this election season because it’s really easy to think that one vote doesn’t matter, but if everyone thinks that, then you don’t have a voice,” Geering said.