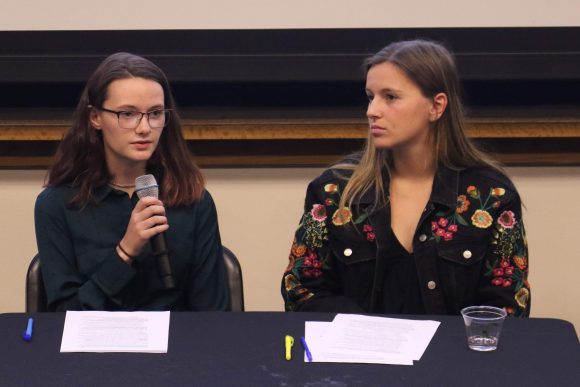 Katy Storm and Kathryn Adams of CU by Storm discuss the first question dealing with campus climate and safety during a debate at Ramaley Hall on Oct. 23, 2019. (Kara Wagenknecht/CU Independent)

With five individuals running for five positions, all candidates were elected into representative-at-large positions during the 2019 fall CU Student Government (CUSG) election. CU by Storm won the largest number of votes, with Evolve coming in second and independent candidate Saisruthi (Shruthi) Bandla in last.

Voting opened Monday morning and closed Thursday night at 8 p.m. Only 3.3% of the 35,353 eligible CU students turned out to vote.

CU by Storm won the majority of the votes: 41.35% of the 1,158 votes cast. Members Kathryn Adams and Katy Storm make up the CU by Storm ticket with Adams receiving just over 22% and Storm receiving approximately 18%.

“I’m so excited to be able to represent the CU student body and make meaningful change on campus and for my fellow students,” Adams said.

Evolve received the second-highest number of votes with 41.13%, only 0.22% less than CU by Storm. George Conway received just over 21% of the overall votes and his running mate, Nicolas Crosbie, won 20%.

“My ticket mate and I put in the effort and we are glad it paid off,” Crosbie said. “I am truly thrilled to be representing other students who attend Boulder and are working actively to bring their goals to fruition.”

Independent candidate Bandla came in last with 17%. Bandla’s campaign focused on creating a new partnership between the university and an app that potentially would allow students to report if they are feeling unsafe. The app would aim to reduce the number of sexual assaults on campus.

“Thank you so much for casting your vote in the election,” Bandla said. “I understand that we are all very busy and extremely appreciate the time you took to show your support.”