At the heart of Colorado soccer is a demanding recruiting process 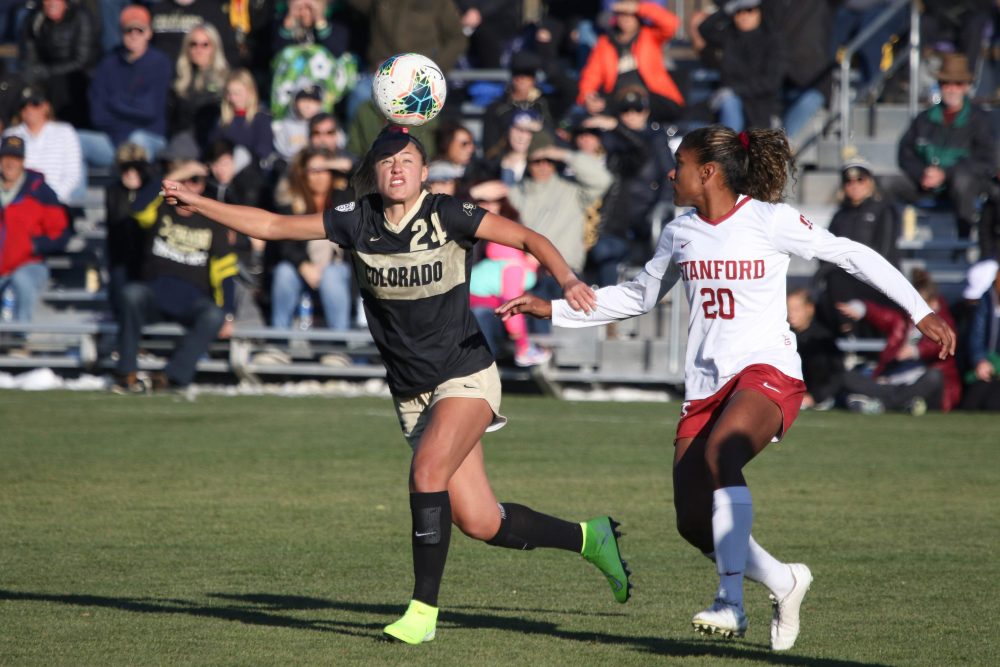 Sophomore defender Sofia Weiner gets prepared to control the ball after a wild pass during the second half at Prentup Field on Oct. 24, 2019. (Kara Wagenknecht/CU Independent)

The NCAA permits four years of eligibility in a five-year period, which means head coach Danny Sanchez must replace his graduated seniors with new recruits or transfers after each season. Sanchez graduated seven seniors last year and his 2019 team reflects this guideline with plenty of fresh faces.

“We have a lot of new players,” Sanchez said. “We have nine freshmen and a couple of transfers. Eleven of our 25 players are new.”

With so many new players, recruiting is a constant process to replace what has been lost and to improve the team. Dave Morgan, an assistant coach and recruiting coordinator for the Buffs, is tasked with securing talent in and outside of Colorado.

“We get out, we identify talent at tournaments, ID camps, clinics, practices, stuff like that,” said Morgan, who is in his fifth season at CU. “Now that the recruiting rules have changed a little bit, it’s slowed it up. What we do is we work on trying to get kids to come to ID camps here on campus, come get visits (and) get them up here to see the beautiful campus and be around the facilities.”

As of May 1, 2019, the NCAA restricts college recruiters from communicating with players until June 15 following their second year of college. Morgan believes the rule is fair and makes it easier to predict a player’s college-level potential in their third year as opposed to their freshman year in college.

“Everybody has a special quality,” Morgan said. “We’ll get out and we’ll watch players and we identify their special qualities. We see where our needs lie within our team and our structure and then we try to balance that. When we got tournaments, we always look for the best player, that’s just the fun part of it.”

It’s an arduous process that keeps Morgan’s eyes open. Sometimes, Morgan said, it’s hard to pick out just one player at any given event.

“When we got tournaments, we always look for the best player, that’s just the fun part of it.”

“Sometimes we’ll be out to watch player A, and then you’ll stumble on player B because they have certain qualities that can fit into your team,” Morgan said.

In-state freshman forward Tessa Barton said it was her club team, the Colorado Rapids of the Elite Clubs National League, and showcases that paved the way for her college career. A graduate of Columbine High School, CU wasn’t Barton’s first commitment, but she transferred to join her older sister and senior forward Tatum Barton. Although it took the younger Barton some time to find the right fit, she said she is glad to have picked a school near home.

“The recruiting process was long,” Barton said. “I was looking at a lot of the (southern) schools at first. I was actually committed to Mississippi State at one point, but seeing my sister play (at CU) … I would always come watch because it’s not far from home. I just fell in love with the school and the soccer, the campus and just the girls on the team seemed awesome. It just felt like the perfect fit and there’s nothing better than staying home.”