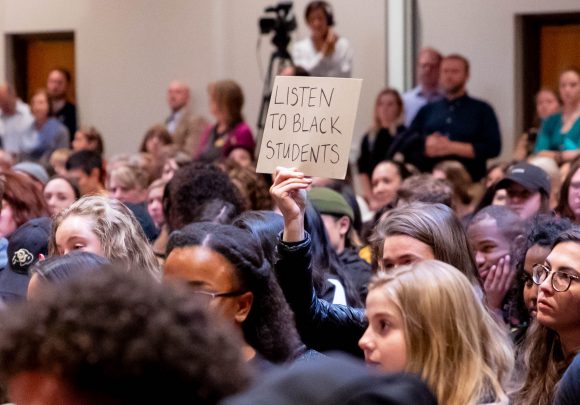 Student Melissa Campanella holds up a sign during the State of the Campus address. Oct. 8, 2019 (Casey Paul/CU Independent)

University of Colorado Boulder Chancellor Philip DiStefano’s annual State of the Campus speech was clouded by a racist incident that happened Sunday as hundreds of students attended to demand action from the university. Many walked out about halfway through the event after feeling too little time was spent addressing the incident.

A video posted to social media Sunday showed a white woman twice calling a black student the N-word in CU’s Engineering Center. DiStefano digressed from his prepared remarks to condemn the incident and said he planned to work with students on ways to improve campus culture. Once the chancellor moved on to discuss other campus matters with a panel, students walked out of the Glenn Miller Ballroom in protest, saying they felt their concerns were not addressed. 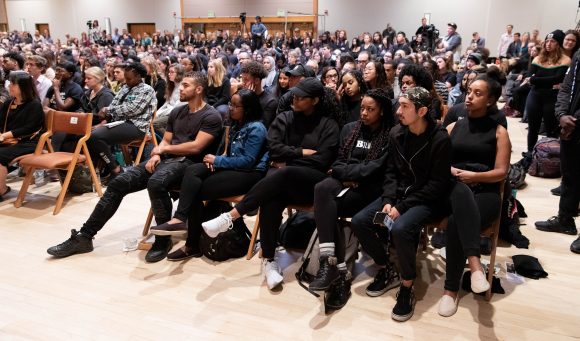 Members of the Black Student Alliance come together to support their cause. Oct. 8, 2019 (Casey Paul/CU Independent)

“(The incident) is and was absolutely unacceptable,” DiStefano said during the speech. “This racist incident reminds us of who we are as a campus community. Incidents like Sunday’s only reinforce the difficult work that we have yet to do.”

Monday, the Black Student Alliance released a list of demands for the university and encouraged students to dress in black Tuesday as a form of solidarity. DiStefano said he has instructed his leadership team to partner with student leaders to immediately begin a review of policies, training, reporting processes and other campus efforts of how the university deals with racism. He said changes will begin rolling out by the end of the academic year.

“I agree with everything BSA is demanding,” said CU senior and Muslim Student Alliance member Nur Daghestani. “I would like (CU) to take action, not just a general email.” Daghestani referenced DiStefano’s campus-wide email Monday in which he condemned the racist act. 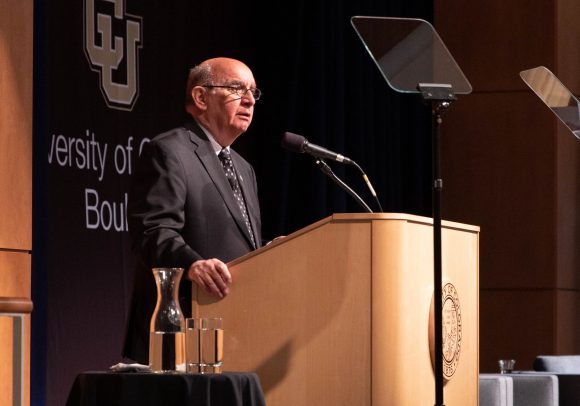 CU senior Lorenzo Tamayo-le said he experienced racism in his sophomore year when fraternity members yelled racial slurs and harassed him. He said following this he was sent to a white counselor.

“I want more people of color therapists and counselors,” Tamayo-lee said. He added that CU uses people of color in its advertising but does little to actually support them through times of discrimination.

Regent Linda Shoemaker said she was also in attendance to support BSA and said that even though the woman who called the black student a racial slur is not a CU student, it is important for the university to send a message to people of color that it supports them. At the time of this article’s publication, Shoemaker said regents have yet to formally address the incident with CU President Mark Kennedy.

“This racist incident reminds us of who we are as a campus community. Incidents like Sunday’s only reinforce the difficult work that we have yet to do.”

Answering questions from the audience, DiStefano assured a meeting between BSA and other student leaders is scheduled for tomorrow and that he hopes to see a timeline of the next steps as soon as possible.

“What I need … are the ideas coming from the students and the faculty to get these things moving forward quickly,” DiStefano said.

DiStefano moved on from the incident to speak with a panel on stage about other campus initiatives, saying he would return to student questions if he had the time. 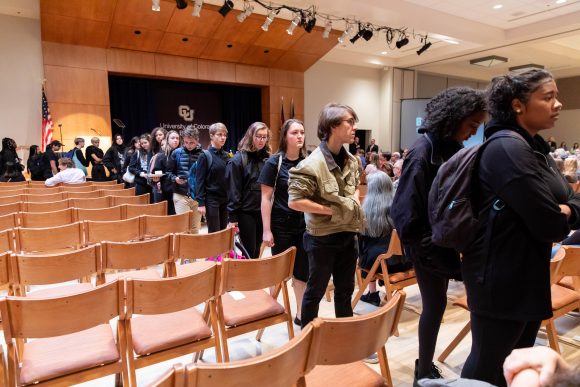 Students and members of the Black Student Alliance walk out of the State of the Campus address. Oct. 8, 2019 (Casey Paul/CU Independent)

After walking out and leaving one side of the room practically empty, students gathered outside the UMC fountain area to express disappointment in the chancellor’s decision to move on to other campus affairs.

“It was very dismissive,” said junior Jiulia Alencar. “People were clearly there because they wanted the situation addressed. (CU) said ‘this is terrible, now let’s talk about something else.”

Many criticized DiStefano’s focus on fundraising and awards. 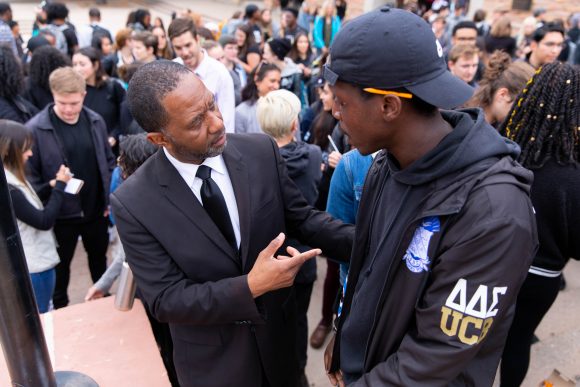 Elicia Goodsoldier, a community member, said DiStefano should have addressed people of color specifically when it came to his discussion of mental health on campus. She said DiStefano’s comments were too general.

“He should have been emphasizing black students and students of color,” Goodsoldier said. “They are the ones whose mental health is impacted by racism.”

DiStefano said that he would release public information following his meeting with BSA and other student leaders tomorrow.