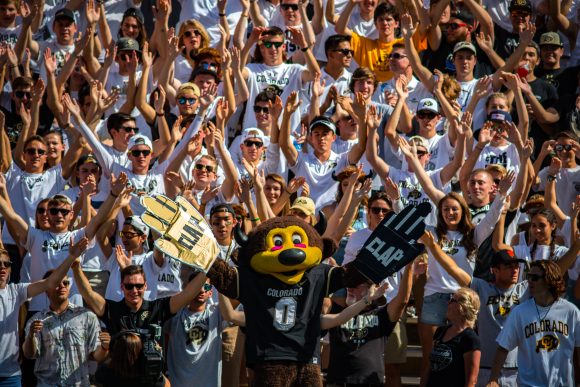 Imagine working a fulltime job, one that is part of a multi-billion-dollar industry, where your manager can make well over a million dollars per year, and where your job performance is followed by millions across the country. Now, imagine that not only does your job not pay you, but it doesn’t even allow you to profit off of your own name, image and likeness.

Welcome to the NCAA.

According to a Pac-12 study, college athletes spend 50 hours per week on their sport during the season. The “Power Five” conferences alone generate billions of dollars in revenue each year, with CU Boulder bringing in $85,084,427 last fiscal year. Hundreds of millions of dollars are spent by multinational brands to sponsor these athletes, with money going to anyone but the athletes. The commissioner of the Pac-12 makes over $5 million per year. Mel Tucker – CU’s new head football coach, hired after we sent Mike MacIntyre packing with a cool $7.238 million parting gift – signed a five-year contract with a base pay of $14.75 million, and he has eight assistant coaches making over $200,000 per year. Athletes, on the other hand, make $0. Essentially, college athletics is a big business for everyone but the players.

Fortunately, some states, led by California, are chipping away at this absurdity. On Monday, California Governor Gavin Newsom signed the “Fair Pay to Play Act” into law, which as of 2023 will make it “illegal for schools to prevent an athlete from earning money by selling the rights to his or her name, image or likeness to outside bidders.” (It says nothing about colleges directly paying athletes.) As pathetic as it is that a law needs to be passed to give athletes these basic rights, it’s an important step in the right direction. Colorado state senators Owen Hill and Jeff Bridges followed suit on Tuesday, and announced plans to introduce similar legislation in Colorado next year. Hill called the NCAA regulations “garbage, trash.”

But wait, you might say. Don’t college athletes get scholarships? Isn’t that enough?

According to Business Insider in 2013, “fair market value for the average FBS football player is $137,357 per year, and the fair market value for the average men’s basketball player is $289,031 per year.” In 2017, Forbes dug into the FBI findings of under-the-table payments to college. It found that even illegally, student-athletes were still underpaid.

“Essentially, college athletics is a big business for everyone but the players.”

Plus, let’s not forget that NCAA institutions don’t have a great track record of putting academics first. The high pressure and workload on college athletes make it difficult for some, especially in the “revenue sports,” to fully take advantage of their academic opportunities. That Pac-12 study found that athletes “say they are too exhausted to study effectively, that they are unable to devote enough time to both their academics and tests and that athletic stress negatively impacts their academic focus.” The mere structure of NCAA Basketball is such that if you’re on a great team you could miss about 20% of the semester.

None of this is to say that college athletes can’t also be amazing students. They certainly can be, and many are. Any blame lies on the institution instead, which often treats them as athletes first and students second. But even if it were the case that all student-athletes were getting great educations (and I’d like to think that all here at CU are), they still deserve a slice of the pie.

It’s important to recognize that the right for athletes to profit off of their name, image and likeness applies beyond these big “revenue” sports. There might be an argument that colleges shouldn’t pay athletes on each team identically – and remember, colleges paying athletes isn’t even on the table right now – but it’s absurd to suggest that one only earns this right when they’ve already brought in millions for the school. And here at CU, our “non-revenue” athletes should certainly stand to benefit from such a rule change.

Take a look at fellow Buff Dani Jones who, in addition to leading CU to yet another NCAA Cross Country Team National Championship, is also the reigning cross country individual champion and 5,000m champion, and is a legitimate contender for a spot at the 2020 Olympics. Erik Dengerud was only a freshman when he won the 2019 NCAA Freestyle National Championship, helping lead the Ski team to a third-place finish at the NCAA Skiing Championships. Such athletes are not a part of a sport that has lucrative contracts or brings in millions of dollars in ticket sales. But there is no doubt that folks would pay money for their autographs, that some local businesses would pay them to appear at promotional events, or that various companies would sponsor them like the world-class athletes they are. These athletes and all athletes deserve the right to profit off their name, image and likeness if they so choose.

There’s a lot to say about the state of college athletes – regular readers of the CU Independent will know that I unapologetically think college athletes ought to act decisively and collectively to demand their rights as the workers they are – but the absolute baseline is to let athletes have real control. College athletes are people. They deserve their rights just like everyone else.