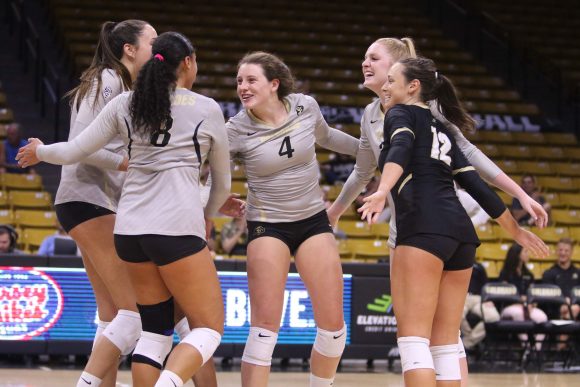 CU volleyball team celebrates together during the fourth set on Sept. 20, 2019 at the CU Events Center. (Kara Wagenknecht/CU Independent)

The University of Colorado women’s volleyball team squared off against Oakland University in the battle of the beasts: Buffaloes versus Golden Grizzlies. CU got off to a hot start in the Colorado Classic and got back on track in this game after dropping two matches in a row last week to Colorado State University.

CU’s Justine Spann played well last week but was overall stifled by the tight CSU defense. She was glad to help the team bounce back this week with 21 kills.

“I think that it’s important for us to make a statement right now, especially after the two losses last week against CSU,” Spann said. 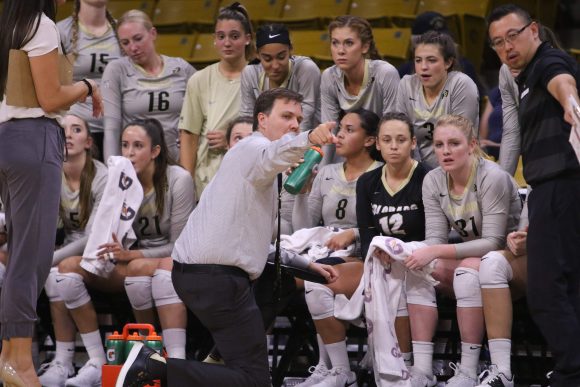 Head coach Jesse Mahoney explains a play during a timeout on Sept. 20, 2019 at the CU Events Center. (Kara Wagenknecht/CU Independent)

Oakland’s energy was high from the start, going point for point with CU for the first few minutes of the game. However, CU quickly buckled down and rattled off three points in a row, giving them some much-needed breathing room.

Colorado’s outside hitters connected well with the ball in the first set, leading to a strong 19-11 lead. The Buffs then went on cruise control and finished the first set handily, 25-14.

CU picked up right where they left off in the first set, quickly jumping out to a 9-4 lead to begin the second. Danielle Price led the Buffs early on with five kills along with one block. Spann and Jill Schneggenburger also joined the points parade with three kills each midway through the second.

Oakland was not able to do much in the second set as Colorado continued to step on the gas. The Buffs wound up winning the set 25-12 to pull ahead in sets 2-0.

Jenna Ewert played a huge role for Colorado in the first two sets. She only had two kills but had a whopping 26 assists at the end of the second set, blowing out the next highest assist leader by 18.

“The passing was really key for us tonight,” Spann said. “Jenna (Ewert) was really able to make our offense diverse and put (the ball) all over the place which gave us more options.”

Oakland came out with some passion in the third set and managed to stave off the Buffaloes’ attempts to finish them off. CU trailed Oakland for most of set, but never by more than three points. No. 13 for Oakland, Brittany Welch, was most responsible for keeping the Golden Grizzlies in the game with 11 kills and one block.

“I thought exactly 75% of that match was really high-level volleyball for us,” CU head coach Jesse Mahoney said. “I thought 25% of it was really mediocre volleyball. That being said, kudos to Oakland after being blown out in the first two sets to respond the way they did. I thought they played great in the third set.”

Late in the third set, the score sat at 24-22 Oakland. Much to the pleasure of their fans, CU came roaring back to tie the game at 24. Just two points later and the Buffs fans’ pleasure faded as Oakland escaped the sweep, winning the set 26-24. The match still leaned in the favor of the Buffs, now leading in sets 2-1.

The fourth set mirrored the third in the beginning. The score jumped back and forth between the two teams until Colorado earned themselves a four-point lead, 10-6. 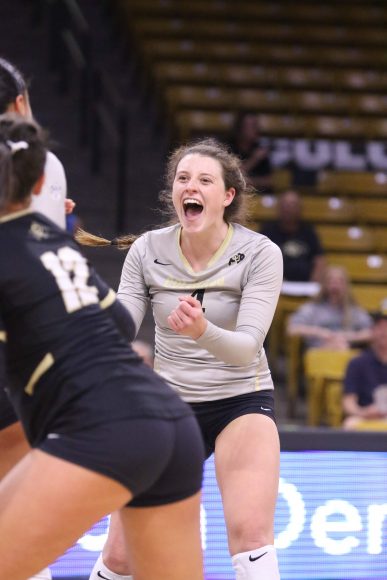 By the end of the fourth set, Colorado’s Ewert had a massive 51 assists on the night. To put that in perspective, the next highest assist leader, AnnaBelle Tomei for Oakland, only had 18 assists. Mahoney certainly took notice and will be even more pleased when he sees the numbers later.

“I haven’t looked at the passing numbers yet, but I feel that was one of our best matches in terms of passing,” Mahoney said. “We were in system a bunch which is why we’re able to score in the middle as much as we did.”

“We got to recover tonight,” said Mahoney. “Hydrate, sleep, spend time with the trainer and then we got to get up in the morning and watch the film at 8:30 a.m., have a pregame meal and then it’s game time.”

The Buffaloes continue their quest to win the Colorado Classic beginning at noon MST on Saturday, Sept. 21 against University of Maryland Baltimore County at the CU Events Center. 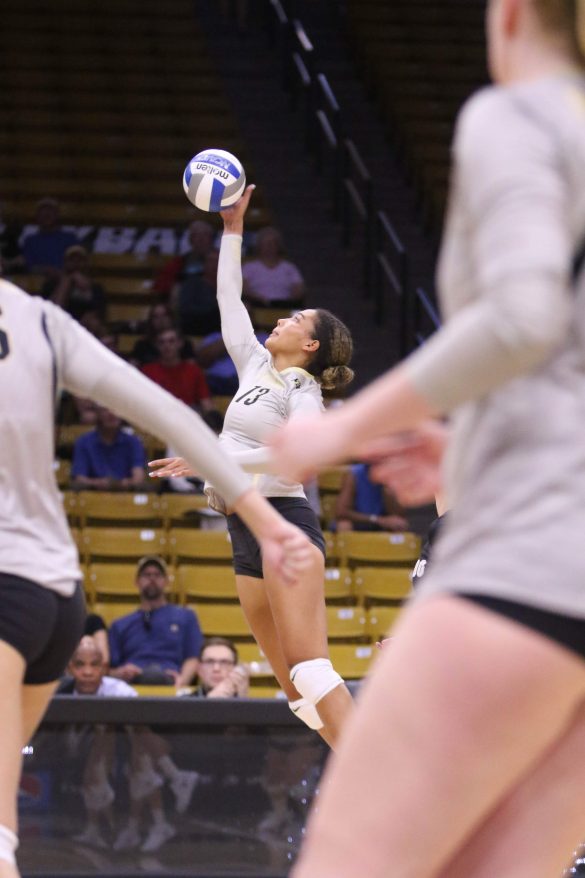 Freshman Sterling Parker hits the ball back to Oakland during the fourth set on Sept. 20, 2019 at the CU Events Center. (Kara Wagenknecht/CU Independent) 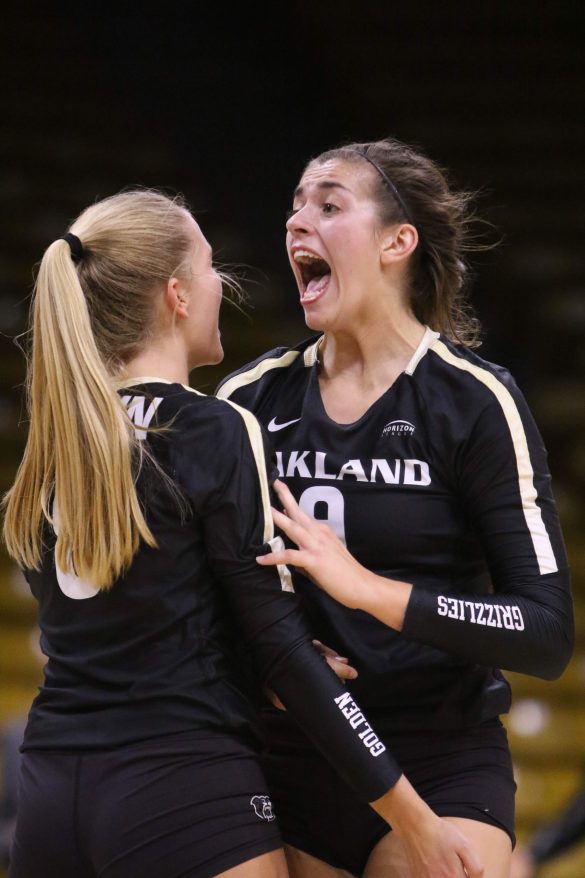 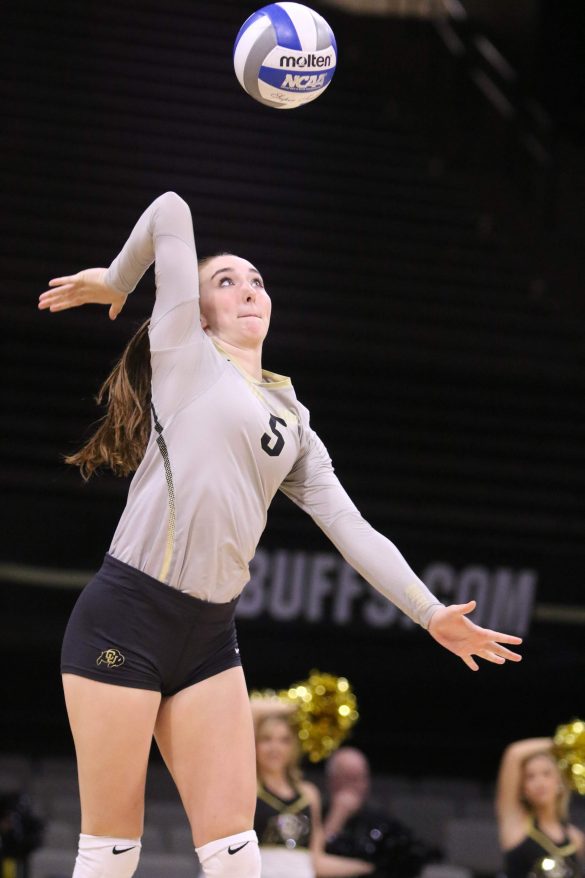 Sophomore Zoe Neverdowski serves the ball during the third set on Sept. 20, 2019 at the CU Events Center. (Kara Wagenknecht/CU Independent) 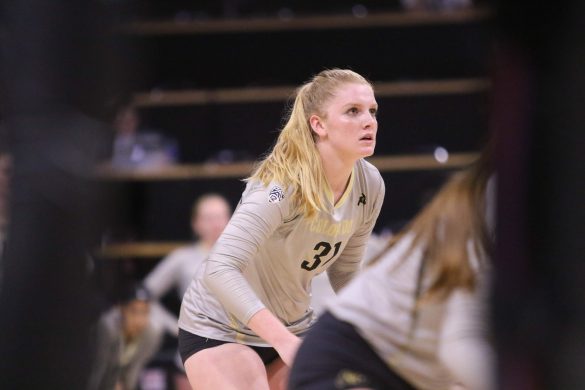 Freshman Jill Schneggenburger awaits Oakland's serve to cross over the net during the first set on Sept. 20, 2019 at the CU Events Center. (Kara Wagenknecht/CU Independent)