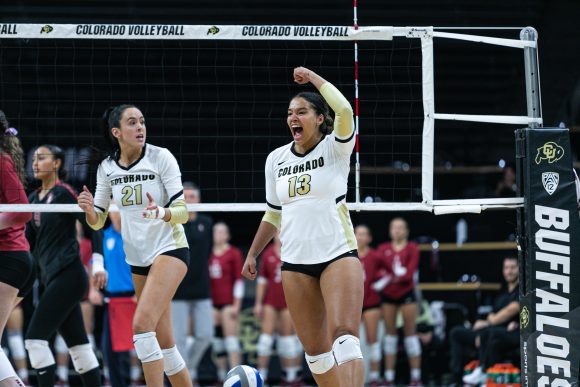 “I’m proud of our team,” said head coach Jesse Mahoney. ‘[I’m] happy that all their work has paid off and that we’re still playing. There’s not a lot of teams that are and we’re happy to be one of them.”

For the first match against Utah, Colorado didn’t have the best start. Though CU briefly had the lead, Utah quickly turned it around. Utah’s outside hitter Madelyn Robinson caused problems for Colorado throughout the game, getting 24 kills for an impressive game. Though Colorado attempted to make a late comeback, cutting their opponent’s lead significantly, Utah eventually managed to break through CU’s defensive efforts and closed out the first set 25-19.

After the first set, however, CU improved significantly and played much better for the remainder of the game, winning each of the next three sets in an impressive sweep.

“We started off a little slow in set one,” Mahoney said. “I am really proud of how we responded in sets two, three and four. One of the things I love about this team is the total team effort.”

The Buffs played with confidence in the later sets, leading to their important victory. During the second set, sophomore setter Taylor Simpson managed to land a tricky dump that closed out the second set 25-21. In the next set, which CU won 25-23, graduate outside hitter Lexi Hadrych had an impressive solo block. CU also had seven aces, one of which came from senior Katie Lougeay to close out the match, as CU took the fourth set 25-17.

A few days later, on Sunday, Nov. 27, the NCAA announced that CU had secured a spot in the bracket.

Following this announcement, many of the Colorado seniors had a chance to reflect, both on their time with CU and the season so far; however, they knew that the job wasn’t over yet. Hart, a graduate middle blocker who had four blocks and seven kills against Utah, and DeLuzio, a graduate setter, expressed their excitement about CU’s upcoming tournament appearance.

“It feels great,” DeLuzio said. “Anytime [we get] into the tournament, it’s a really nice feeling. I think coming back, there wasn’t any doubt in my mind that we would be in this situation.”

“We’ve both been in the tournament before,” Hart said. “I wasn’t really playing, but then it was still exciting. [With] all of the hard work that we’ve put in, it just means a lot.”

CU will look to end their great season with a positive showing at the NCAA tournament; however, regardless of the outcome, the Buffs can look back at the season with pride.

Colorado will play in the first round of the NCAA tournament against Rice at 3:30 p.m. MST on Thursday, Dec. 1. The match will be aired on ESPN+. If CU wins, they will play again on Dec. 2 for a chance to advance to the NCAA regional competition in Louisville, Kentucky.