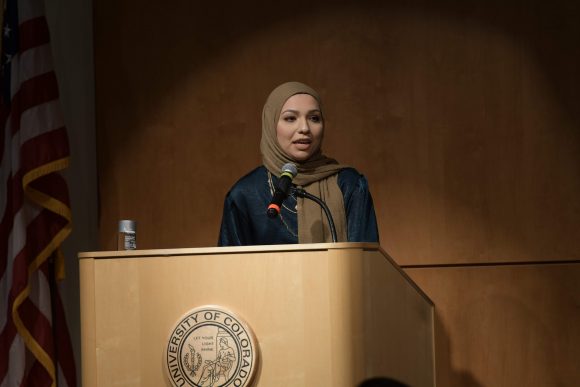 Isra Chaker speaks about the misconceptions of refugees at an event held by the Cultural Events Board in the Glen Miller Ballroom. Sept. 17, 2019. (Vyla Carter/ CU Independent)

Civil rights activist and University of Colorado Boulder alumnus Isra Chaker spoke to a crowd Tuesday night about refugee and asylum seekers’ rights. The event, titled “Facts, Not Fears: Dismantling the Misconceptions of Refugees,” was held in the UMC’s Glen Miller Ballroom on the CU Boulder campus. It was put on by CU’s Cultural Events Board.

Born and raised a Syrian-American Muslim in Boulder, Chaker had her first shot at change when she ran for student government at CU. While campaigning she remembers receiving xenophobic backlash for being a Muslim woman running on a platform of inclusivity and diversity. Receiving a feeling of “otherness” amongst her peers, Chaker changed her academic focus from becoming a building architect to a social architect for the rights of immigrants and minorities, turning towards national politics and moving to Washington D.C.

Chaker now works as a lead in the Refugee, Migration and Protection Campaign for global non-profit Oxfam. She has served as a humanitarian NGO working in Syria and has spoken at the United Nations Human Rights Council in Geneva. Her work seeks to represent and help refugees, Temporary Protected Status holders and asylum seekers.

“Refugees are being denied their rights and not finding safety here and it’s not acceptable,” Chaker said. “It’s not what America is about, it’s not what our American values are about.”

“The Muslim ban is a discriminatory measure,” Chaker said. “These series of bans on refugees and asylum seekers have meant that people fleeing the most horrible situations have been turned away and sent back to the harm they were escaping. This is not America.”

She reminded the audience that the Statue of Liberty, also referred to as the Mother of Exiles in the New Colossus poem that stands at its feet, has been a beacon of light and hope in the world. Chaker asked the crowd to imagine if the U.S. had excluded Albert Einstein or Madelaine Albright had more restrictive immigration policy been in place.  She used this hypothetical to make people think about immigration law in a different way.

“Use facts over fears,” Chaker said.

Citing that refugees go through some of the most thorough vetting processes, Chaker asked audiences to dispell beliefs that immigrants are dangerous. According to Chaker, many go through a process that can take up to two years, with background checks of immediate and extended family and extensive health screenings. Refugees also pay into the system they are trying to enter, Chaker said, by bringing in $63 billion to government agencies, which the current administration has downplayed.

Chaker also pointed to Trump’s consideration of cutting the number of accepted refugees and asylum seekers from 110,000 refugees in 2017 to 10,000-15,000 in 2020. Chaker said there are bills proposed to combat this such as H. R. 2146, the Grace Act, which seeks to set an annual refugee admissions floor of 95,000, the average number most other countries who take refugees accept annually.

“We’re working to advocate to have these executive orders be rescinded and repealed,” Chaker said.

Ultimately, Chaker hopes that America’s culture can become more accepting of those outside its borders. While she said her path towards her work has not always been clear, her passion is what drives her.

“It’s been a full journey,” Chaker said. “I recognized my purpose on this campus as one where I could affect change in our communities and I followed that passion to D.C. to where I am today.”

For audience members, Chaker’s talk resonated on an emotional level.

“I started learning about refugee rights and policy in 2014 and the climate was so different then,” said CU student Ellie McGinnis. “Everyone deserves safety. In the last few years, it’s gotten so discouraging to have this conversation with people. This is an ethical and moral responsibility, and there’s a lot of fear around it that doesn’t hold up to the reality of the issue.”

For CEB, Chaker presented a poignant message in a time of political unease.

“We wanted to bring Isra here, especially with upcoming elections,” said business major and CEB board member Victoria Arije. “We want our student population to be informed. It was really nice to have someone come in to spill fact.”