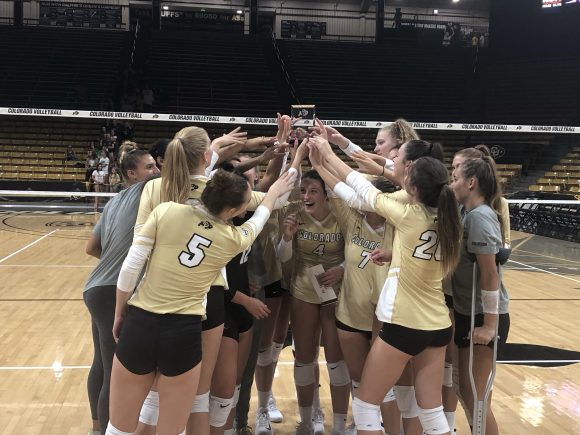 Senior outside hitter/defensive specialist Justine Spann led the way for the Buffs Saturday with 21 kills and tournament M.V.P. while sophomore setter Jenna Ewert had 40 assists. Head coach Jesse Mahoney was pleased with the team’s effort and tournament victory.

“It feels really good,” said Mahoney, who is in his fourth year coaching at CU. “This weekend was a good opening weekend for us. It was a good test. We played better progressively, especially this last match. We are excited to get out of the weekend winning three at home.”

Colorado began the match on fire, jumping out to an early 10-5 lead and keeping the momentum throughout. Spann totaled four kills and CU took the first set 25-16. The chemistry between Spann and Ewert helped the Buffs throughout the match.

“I really just wanted to get focused in and really connect with Jenna as much as (I could) to get some energy,” Spann said. “Energy is a really big thing on our team and generating that is what I want to do on the court. Moving onto next weekend, I just want to keep the momentum rolling. I want this year to be really big for us so I’m super excited about that.”

The second set saw the Buffs take a 12-5 lead, with help from freshman middle blocker/right-side hitter Sterling Parker who collected 12 kills and led the team with a .500 kill percentage. California made things a little closer in the second set but eventually fell 25-19. Mahoney believed Saturday’s game was Sterling’s strongest of the tournament matches.

“The first two matches I think Sterling didn’t play her best, and I thought she played a great (third) match from a blocking standpoint,” Mahoney said. “She finally starting clicking offensively and she does some amazing things at practice and that’s gonna start to happen in games more often so we’re excited about that.”

But Colorado did face one hiccup during the game’s third set. The Buffs fell down 11-7 when Mahoney called a timeout. Though Colorado attempted to gain a little momentum it wasn’t enough and CU dropped the set 25-22.

The Buffs’ fourth set was a back and forth affair. The set was tied at eight when CU hit a cold stretch and fell behind 20-17. Mahoney had seen enough and called another late timeout for a pep talk with his team. This time, the Buffs took their coach’s message to heart.

Colorado will look for another tournament victory next week during the Pac-12/ Big Ten Challenge. The Buffs will head to Iowa City and open the tournament against Iowa on Sept. 6 at 5 p.m. MST.