Case will go forward for CU student charged with rape 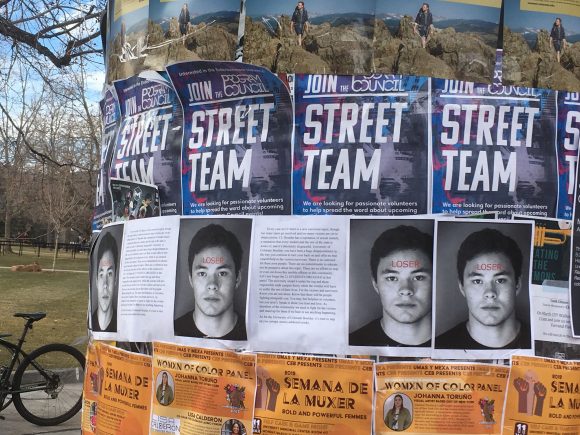 Flyers of Roper’s mugshot were displayed on campus after his arrest. (Carina Julig/CU Independent)

A preliminary hearing for CU student Zachary Roper ruled that there was probable cause for the case to go forward, and the next hearing will be on August 9.

Roper, 19, was arrested on March 11 and was released on bond. According to the arrest affidavit from the Boulder Police Department, Roper and the sorority member were dates at a “date dash” event held by the sorority at a Loveland laser tag facility. Members who wanted to attend were required to bring a date. The woman was set up with Roper by a fellow sorority member but had never met him before the event. The affidavit said that the woman, Roper and other sorority members drank at Roper’s apartment in Boulder before heading to the event in Loveland.

The woman stated she did not remember much of the evening after leaving Roper’s apartment. Reportedly, members of the sorority executive board decided to send her home from the event for being too inebriated, and that the sorority policy is to send members home in an Uber with their dates if they are too drunk.

An Uber was ordered with the address of the sorority house, but during the ride, Roper changed the address to his apartment. The Uber driver who drove them told police that they were both clearly intoxicated and that the woman was passed out for most of the ride. He said that the woman only said a few words during the ride and needed to be woken up and given assistance leaving the car and walking at the end of the ride.

A sorority member who was at the sorority house was contacted by one of the executive members and told to keep a lookout for the woman and Roper, who the affidavit reported her being told was “kind of creepy.” When the two did not arrive at the expected time, the sorority member became worried and asked other people at the house if they knew where she might be. Roper’s roommate was at the house and said he was concerned that Roper may have taken her back to their apartment.

Roper’s roommate went with the sorority member and two other members to the apartment, where they entered Roper’s room and saw him sexually assaulting the woman, who appeared to be unresponsive. They got her out of the apartment and took her to the hospital to receive a sexual assault examination.

Roper’s roommate and Detective Ross Richart, the lead investigator in the case, both testified at the hearing. Roper, who was accompanied by his family, did not speak. The next hearing will determine whether a plea deal is made or whether the case goes to trial.