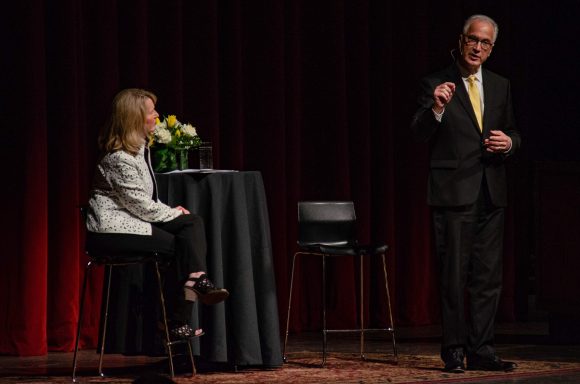 After a contentious public comment period and allegations that the presidential search was mishandled, the Board of Regents have voted 5-4 to confirm Mark Kennedy as the next president of the University of Colorado system.

The vote took place along party lines, with the four Democrats on the Board of Regents voting against Kennedy and the five Republicans voting in favor of him.

Kennedy, who is currently president of the University of North Dakota, was announced as the sole finalist by the Board of Regents on April 10, a decision that was almost immediately met with strong criticism from the CU community. People criticized the lack of transparency in the search process, arguing that the public deserved to know the full number of candidates the search committee had considered.

Kennedy was also criticized for his previous work, especially his track record when he served in Congress from 2001-2007. Kennedy represented Minnesota as a Republican, and had a very conservative voting record, including votes to make gay marriage illegal, to restrict abortion access and to ban stem cell research.

Kennedy released a statement saying that his views on same-sex marriage had changed and said that his political beliefs would not play a factor in his role at CU, but he was still met with strong opposition, especially at the Boulder campus. Students held a protest after he was nominated, and at his public forum on campus last week he was met with heckling and boos.

On Monday, the University of Colorado Faculty Council released a report alleging that Kennedy had engaged in ethical misconduct during the search, including leaving items off his CV and misrepresenting some of his work at UND. Kennedy rebutted the claims, defending his record and affirming his commitment to “strong ethical leadership.” 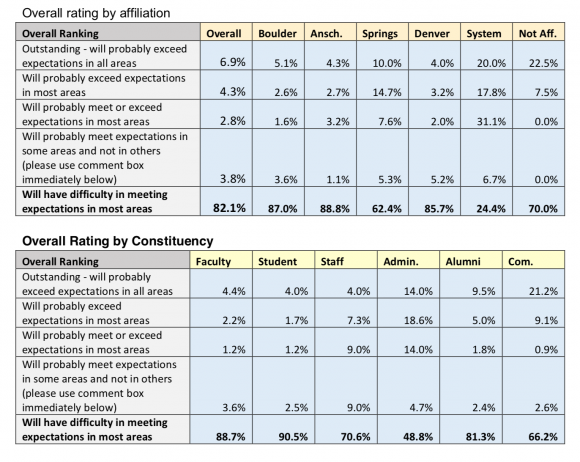 Data from the presidential feedback form. (courtesy of the University of Colorado Faculty Council)

The Faculty Council also released an analysis of responses to the presidential feedback form. The majority of respondents said they believe Kennedy “will have difficulty in meeting expectations,” at 82.1%. Respondents from CU Boulder rated Kennedy the most negatively, and University of Colorado Colorado Springs the least negatively. Out of all constituency groups rated him the most negatively, with 90.5% giving him the worst ranking.

Kennedy will replace current CU president Bruce Benson, who is retiring. Benson started his tenure at CU in 2008 after a similarly controversial confirmation process, and is CU’s longest-serving president in the past 65 years.

A statement sent out from the Board of Regents announcing Kennedy’s election acknowledged the challenges of the past few weeks and asked the CU community to help Kennedy succeed.

The statement said the board “understands and appreciates” the concerns that community members have raised about Kennedy, and that “we will have ongoing conversations with him about addressing those concerns.”

In a video addressed to the university community, Kennedy says that he is “humbled and honored” to be CU’s next president.

“I know some had reservations about my candidacy,” he said. “I want to build bridges and earn your trust.”

Kennedy will assume the presidency in July.

This is a breaking news story and will be updated with further developments.