A look inside Denver’s International Church of Cannabis 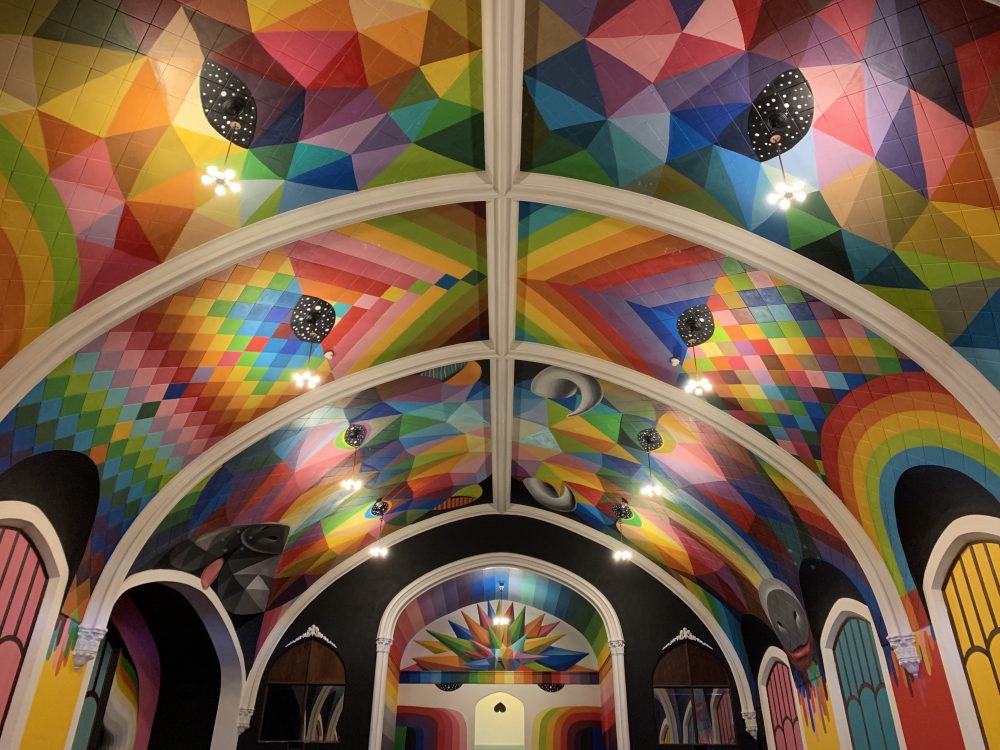 Settled among a row of houses in Denver’s Washington Park neighborhood stands a brown brick church. Visitors come to adhere not to one creed or dogma, but to bask in the church’s fundamental belief: that cannabis will guide them to self-discovery.

Nearly two years ago, the International Church of Cannabis opened its doors to visitors far and wide. As the third-year anniversary of the church approaches on April 20, 2019, (or “4/20” as it is known in cannabis culture), co-founder Lee Molloy remembers a time when the church stood vacant and he and friends only used it to “smoke cannabis and enjoy the space.”

But rather than “cutting it up into condos” or turning it into a “mansion for a football player,” Molloy and others wanted to use the church “for its intended purpose.”

Molloy and other church members are Elevationists, a small group of individuals who were “unsatisfied with the outdated, organized religions currently available to them.”

Elevationism is described by Molloy as the idea that the “ritual use of cannabis” can help one in their “personal, spiritual journey” to become a better self. Molloy explains it is a practice that is non-denominational and is multi-faith. Currently, the church has between 30 and 40 active members.

As Molloy recalls, the church’s founding members all came from a “mixed bag.” Some are Jewish, some Baptists, but all believe cannabis will “break down the walls” of their “stamped identities.”

“Rather than looking for the differences, you start finding things that bring you together,” Molloy said. “And that was really what made this an important idea.”

From prohibition to cannabis worship

The 113-year-old building housed many different religious sects before it became the International Church of Cannabis. Originally built as a Lutheran church known as Mount Calvary Apostolic Church, the building was later purchased by a bank. In the 1930s, the prohibitionist religious group Pillar of Fire came in control of the church.

Prohibition was a nationwide constitutional ban on the production and sale of alcohol that lasted from 1920 to 1933. Molloy describes Pillar of Fire Bishop Alma White as a “rather stern” lady. 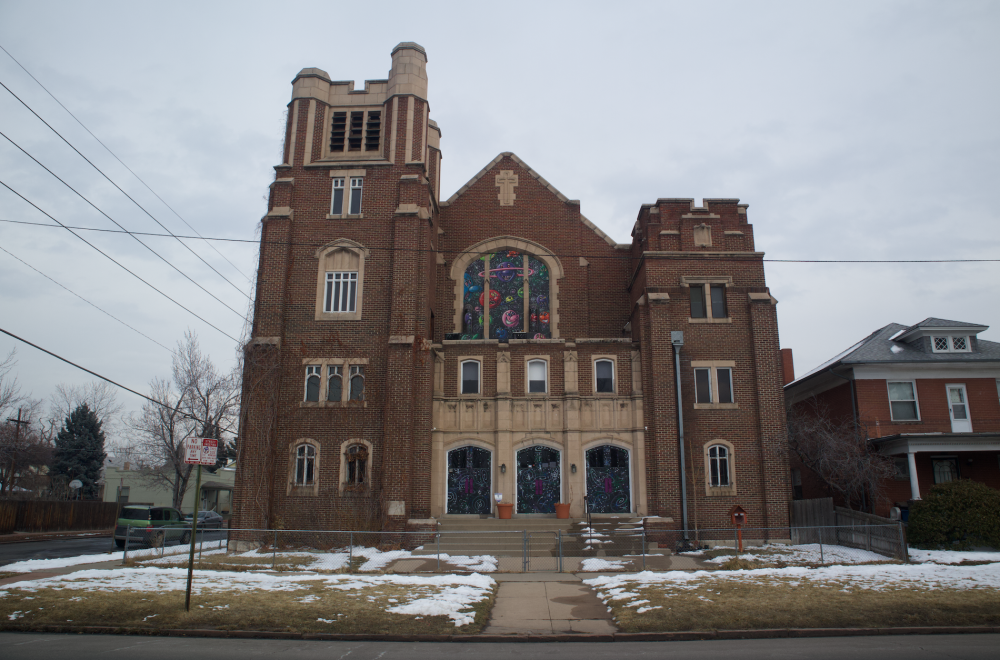 “I often think she wouldn’t be that pleased with us today,” Molloy joked.

The building saw several more Christian denominations occupy the space before standing empty for nearly two years before Molloy and his friends began work on it to create their vision.

Steve Berke, Angie Hargot, Adam Mutchler and Briley Hale were the church’s initial founders, all of whom worked for several years to get the church to where it is today. Currently, the International Church of Cannabis is the number two Denver destination on Atlas Obscura, a site dedicated to highlighting unusual and unique attractions around the world. But the church’s popularity has not just been confined to Denver, or even just to Colorado, as it has been featured by media outlets on every “inhabitable continent on the planet” according to Molloy.

“Everywhere from Japan and Australia and South Africa across Europe, South America, [its known by people] everywhere,” Molloy said. “And yet I’d say if you went three blocks from here I bet you people wouldn’t even know that we exist.”

The Elevationist group worked to bring their spiritual message of a cannabis high to visitors through the church’s elaborately painted chapel. In lieu of stained glass windows, the chapel’s walls are covered in technicolor animal imagery, from a bear, bull and two bird-like figures amidst a star-studded window. 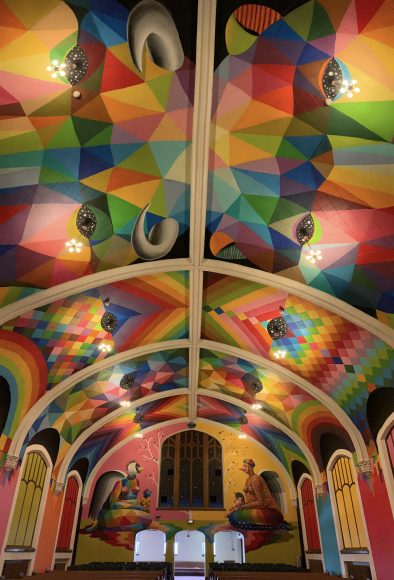 The group came across Okuda San Miguel, a Spanish painter and sculptor known for his distinctive colorful style, when they saw a video of a skateboard park nestled inside a church that Miguel had painted. Miguel and his team were soon brought in by the group to paint the inside of the chapel, a feat which they completed in six days.

Molloy describes working in the chapel as being “like an icebox” as the building remained unheated as the group began its renovation.

Now when visitors come to the church, Molloy finds that most people are “quite blown away by it.”

And it’s not just the inside of the church that boasts the work of an internationally renowned artist. The church’s facade, upon closer inspection, features art by American painter Kenny Scharf. Scharf’s work has appeared in the Guggenheim Museum in New York City, the Museum of Modern Art in New York as well as in the private collection of “millionaires and billionaires around the world” according to Molloy.

Scharf enjoyed the company of friends like Andy Warhol and Keith Harring, who at one point was Scharf’s roommate.

Molloy says co-founder Steve Berke met Scharf at a Comic-Con convention. In February of 2017, the group took a ski trip along with Scharf to Breckenridge, where after smoking weed they asked if Scharf would want to be a part of their project. It took Scharf just 24 hours to paint the three main doors on the front of the church as well as the window area above. 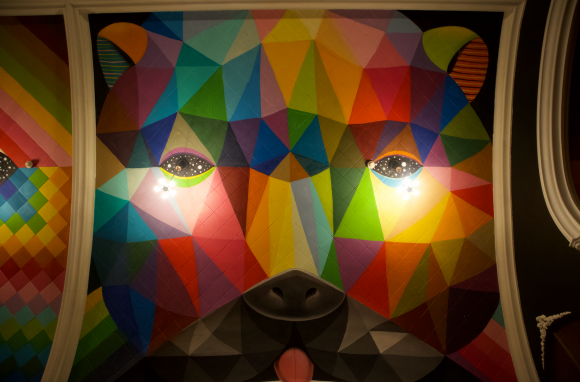 Ceremonies are both familiar and different

Similar to other religious institutions, the church holds a service for visitors which includes reading to attendee’s sitting in pews. Once again the main difference is the inclusion of cannabis.

Services are held on Friday, during which a candle is lit on a pulpit at the back of the church wherein visitors light joints which are shared in what Molloy calls a “community experience.”

The church also hosts weddings which, as Molloy puts it, are “very similar to every other church” except that “there’s a little bit of weed involved.”

“I don’t know what people are looking for,” Molloy said. “Everything is very similar — if somebody’s getting a wedding, they’re going to have a wedding ceremony except for maybe when they exchange their vows they might hit on a joint because that was something that was important to them when they met.” 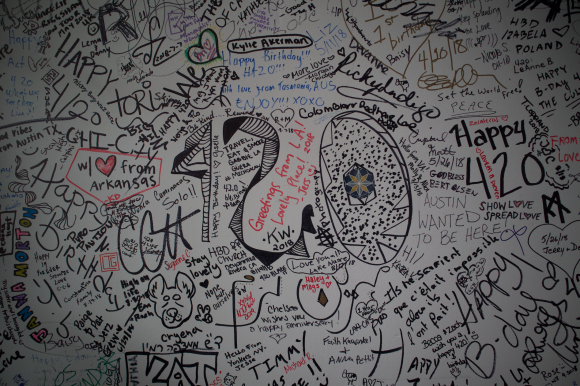 Molloy says it has been a struggle for the church to “fight the powers that be.” Currently, Molloy, along with co-founders Steve Burke and Briley Hale, face a misdemeanor charge for public marijuana consumption, a violation of the Colorado Clean Indoor Act. 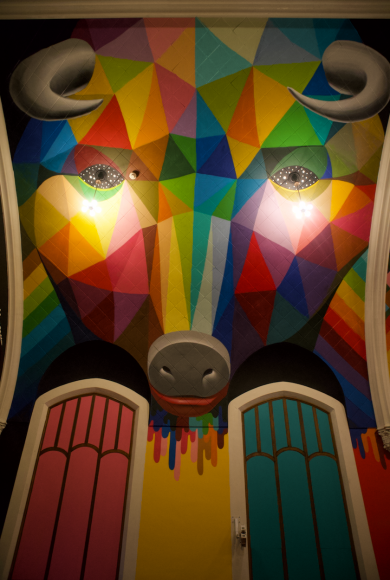 San Miguel’s distinctive colorful geometric painting can be seen on and within buildings across the world. March 6, 2019. (Robert Tann/CU Independent)

The controversy goes back over two years ago, when the church initially opened on 4/20 of 2017. Denver police went undercover during the church’s private celebration which saw over 200 hundred people, many of whom smoked cannabis in designated areas. Police issued fines to church founders that night.

A series of scheduling issues and mistrials have pushed the members days in court back, as Molloy is now set to appear on April 19 of this year, the day before 4/20.

“I’m sure they picked that date just to annoy me,” Molloy said.

It hasn’t been just legal challenges that the church has endured. The church’s neighbors have not all been welcoming to it.

“Obviously you have bigotry and prejudice from the start,” Molloy said. “There’s a lot of people crying about what they think is going to happen when we open and of course none of it happens.”

Molloy sees it as a fear of the unknown. He says neighbors expressed worry that churchgoers would be leaving the area making noise and generally being disruptive to the community.

“They’re looking at people coming here as if it were a bar, not seeing that there’s a massive difference,” Molloy said. “People aren’t coming here drinking, they’re coming here and becoming very peaceful and very quiet and respectful. People are naturally afraid of what they don’t understand.”

“We stand on the shoulders of giants”

As marijuana culture continues to grow in states such as Colorado and others that have legalized the psychoactive drug, Molloy notes that it is important to acknowledge the injustice many have faced because of cannabis use.

“There are people that are still in jail and prison today for relatively small marijuana crimes,” Molloy says. “The fact that they’ve sacrificed themselves for that means that we’re able to do this.”

A placard that sits on the church’s pulpit reads: “We light this candle to celebrate our freedom to Elevation and remember those not at liberty to join us. We support each other on our individual spiritual journey and welcome all, as family, in love and in peace, to burn their sacrament with us today.”

It’s a chance for the church to remember people who have fought the fight for cannabis acceptance. As Molloy said, “we stand here on the shoulders of giants.”