Mark Kennedy. Photo Courtesy of the University of North Dakota Office of the President

The University of Colorado Board of Regents have selected Mark Kennedy as the finalist to replace Bruce Benson as CU president, citing his commitment to bipartisanship and diversity. But since the announcement, community members have raised concerns about Kennedy’s civil rights record as a politician.

Confusion about the extent to which the Regents were informed about Kennedy’s political record has also emerged.

Late-breaking news Thursday night from The Denver Post revealed that a Tuesday article from the Grand Forks Herald rumoring Kennedy’s move caused the board to push up the date of their announcement.

Regent Linda Shoemaker (D-Boulder) told the Post that because of this, Kennedy was not fully vetted before being announced as a finalist to the public.

“We need the press and the public to do the job in vetting him,” Shoemaker told the Post.

Kennedy, a Republican, served in the House of Representatives from 2001-2007, representing two districts in Minnesota. In 2006 he ran to represent the state in the U.S. Senate but was defeated by Amy Klobuchar.

Kennedy was one of four finalists in University of Central Florida’s presidential search last year, but was ultimately not chosen. Kennedy entered the UFC presidential search less than two years after starting his tenure at North Dakota, a decision that was not popular with the UND community.

While in Congress, Kennedy voted in support of several anti-civil rights bills, demonstrating an anti-LGBT and pro-life life stance. Kennedy also voted against support for college programs geared towards minorities and bears an unfavorable track record when it comes to higher education.

The Board of Regents’ decision has left many questioning if Kennedy is the right person to represent the CU community.

In 2004, Kennedy voted YES on bill H.J. Res. 106, “proposing an amendment to the Constitution of the United States relating to marriage.” The bill aimed to ban same-sex marriage, declaring that “that marriage in the United States shall consist only of the union of a man and a woman.”

In 2006, Kennedy voted YES on bill H.J Res. 88, also known as the “Marriage Protection Amendment,” which he also cosponsored. This bill attempted to constitutionally define marriage as between a man and a woman, stating “neither this Constitution, nor the constitution of any State, shall be construed to require that marriage or the legal incidents thereof be conferred upon any union other than the union of a man and a woman.”

The American Civil Rights Union (ACLU)  rated Kennedy at 7% on civil rights liberties. The non-profit organization, whose mission is to “to defend and preserve the individual rights and liberties guaranteed to every person in this country by the Constitution and laws of the United States,” rates members of Congress based on their voting record in regard to promoting civil rights bills which support marginalized and minority groups.

CU sophomore Ryan Brady does not believe that a person “with such an overtly regressive record” should be in a position to represent a majority progressive student body.

“Essentially, his record leaves me with little reason to believe that he’ll actually have students’ best interests at heart, especially LGBTQ+ students and students of color,” Brady said.

Lucy Horne, a junior, says she is “not pleased” with the Board of Regents’ announcement. She finds the board’s decision to put forward only one finalist “aggravating.”

“The fact that there is only one candidate takes away any illusion that the students have a say in who leads our universities,” Horne said.

Another thing Horne takes issue with: Kennedy was ranked at 17% by the National Education Association (NEA) when it came to supporting public education. It’s something Horne finds “concerning”, seeing as the CU system is a public education institution.

In regards to Kennedy’s track of anti-LGBTQ+ positions, Horne acknowledged that Kennedy’s votes were done in the past.

“His views may have changed,” Horne said. “But, I haven’t heard about anything that he’s done for the LGBT community or a statement he’s made saying he’s changed those views. And he can’t be expected to serve the entire student body at the CU campuses and make university funding decisions for us if he is actively against the LGBT part of the student population.”

Sean Weller, a sophomore political science major, is “appalled” that Kennedy is a consideration for president, referencing the shutting of UND’s women’s hockey program. UND also shut down its men’s and women’s swimming teams under Kennedy.

“For a school as progressive as CU, this seems like a massive step back, and does not represent the interests of the vast majority of the student body,” Weller said.

“I’m an employee of CU Boulder and knowing that the person who could soon be the head of this organization voted yes on an amendment to make marriage equality illegal is not reassuring,” said Steven Frost, an instructor in the Media Studies department. Frost is queer and is married to another man.

Frost said he is also concerned by Kennedy’s history of anti-abortion legislation.

“It makes me very uneasy that the Regents wanted to promote someone who’s so deeply involved with those sort of right-leaning politics,” he said.

When asked about Kennedy’s anti-gay record, Board of Regents Chair Sue Sharkey forwarded all questions to CU Vice President for Communication Ken McConnellogue. McConnellogue told the CUI in an email that Kennedy has “demonstrated a strong commitment to LGBTQ+ issues” in his current position. He did not give further specifics.

McConnellogue told the CUI that the board has no comment on Kennedy’s low civil rights ACLU rating. 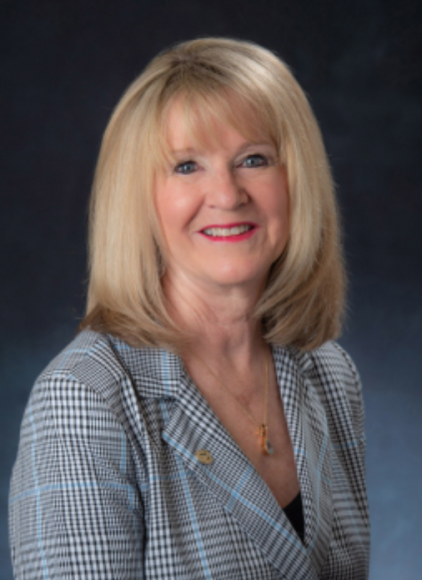 CU Board of Regents Chair Sue Sharkey. Photo courtesy of University of Colorado.

Representatives for Governor Jared Polis, Colorado’s first openly LGBT governor, declined to comment on Kennedy’s selection. Kennedy has said that his first phone call as CU president would be to Polis.

In an interview with the Daily Camera, Kennedy defended his track record on LGBT rights. He said that he considers same-sex marriage “a settled issue,” and said that at the University of North Dakota, where he is currently president, they issued an anti-harassment policy which included sexual orientation and gender identity. He also noted that he appointed the school’s first openly LGBTQ dean.

The Board of Regents voted unanimously to select Kennedy as the sole finalist. In the university’s announcement of the selection, Board of Regents Vice Chair Jack Kroll stated that Kennedy has “a strong commitment to diversity.”

However, following the announcement, Board of Regents member Lesley Smith (D-at large) tweeted Wednesday that “some information about Mark has come to light that is concerning; my colleagues and I will be exploring this further.” Earlier in the day she had tweeted that “[Kennedy] had very strong answers about diversity, including LGBTQ issues.”

Smith told the Camera that the Regents had not discussed Kennedy’s voting record during his interview and that she had not been aware of it until community members tweeted critiques of his record to her.

Smith declined to speak to the CUI on Thursday and said that all press inquiries regarding Kennedy should be directed to McConnellogue. Regents Sharkey and Kroll also declined to comment.

Kennedy’s stance on other bills also show a lack of support for racial minorities. In 2006, Kennedy voted NO on a $84 million grant for Black and Hispanic colleges. Voting YES on the bill would have lowered student loan interest rates and would have provided a $59 million for a new Predominantly Black Serving Institution program and $25 million for a new graduate Hispanic Serving Institution program.

Kennedy also voted against embryonic stem cell research and voted for prohibiting human cloning. He voted YES on funding health providers that do not provide abortion info, ultimately gaining a 0% rating by the National Abortion Rights Action League (NARAL) when it comes to supporting pro-choice issues.

Community members and students speak up

Sean Weller, a CU sophomore, said in a tweet response to the CUI that he finds the board’s decision “embarrassing” considering Kennedy’s “horrible voting record.”

Current CU consultant Diana Kennedy, who also tweeted in response to the CUI, wrote “this will be a sad day for CU if he is hired.” Kennedy was formerly employed by the University of Minnesota during Kennedy’s time as a congressman.

“Count on it being more difficult to recruit talented staff/students,” Kennedy wrote.

Sophomore Hannah Moser says she is “disappointed but not surprised” with the board. While she hoped that Benson’s retirement could have “meant a new era for CU leadership,” the board’s decision proves otherwise. She hopes students will hold the board “accountable.”

When asked about the board’s decision to keep the other five presidential candidates’ information private, Moser says she understands the need for protection, she still would like to know who else was “in the running” and sees it as an issue of transparency.

“The term ‘president’ implies that they were somewhat democratically elected,” Moser said. “At least in a U.S. election, we know who’s running for president, and that’s not the case here.”

“We the CU GSA board strongly oppose Mark Kennedy for CU President. This man’s bigoted values are not representative of the views of our campus and student body. Racism, homophobia, transphobia and sexism have no place in the President’s office.”

Scarlet Bowen, who oversees LGBT initiatives at CU’s Center for Inclusion and Social Change, questions how Kennedy will lead one of the nation’s “top 25 LGBTQ-inclusive universities.”

However, Bowen said in an email to the CUI that “people’s positions evolve and change over time” and hopes that over the two-week feedback period, the CU community is able to “learn more about his higher education record and his demonstrated commitment to diversity and inclusion efforts.”

The president of CU’s College Republicans chapter said that Kennedy “looks like a really promising candidate,” and said that he liked that Kennedy has prior experience in both higher education and politics.

He added that he is concerned that people are only evaluating Kennedy on his past voting record and hopes that students will give him a chance. He encouraged students who are concerned with the selection to take it up with the Board of Regents, which is bipartisan and selected Kennedy unanimously.

In an email sent to CU’s Board of Regents and acquired by the CUI, former Minnesota resident Jill Thompson called Kennedy “one of the most divisive, homophobic politicians to ever represent MN in the U.S. Congress.”

“There’s a reason he had a short tenure as politician, just as there is likely a reason that he wants to depart NDSU after such a short tenure,” Thompson wrote. “His divisive rhetoric, the negative public opinion that surrounds him, and his job hopping should be major RED FLAGS to you.”

Thompson, who now resides in Castle Rock, Colo. believes there are more “respected” candidates and hopes the CU student body and the general public will “loudly protest [the board’s] decision.”

An open letter to the Board of Regents signed by several CU faculty and staff, including Bowen and Nan Goodman, director of CU’s Jewish Studies program, present concerns about Kennedy’s civil rights record and a lack of transparency from the Board of Regents.

“Colorado’s reputation as an open and inclusive place to live, work and study would be damaged by the choice of Mr. Kennedy as president,” the petition reads.

The CU Young Democratic Socialists of America and UMAS y MEXA are hosting a rally Monday in opposition of Kennedy’s nomination. They also plan to demonstrate when Kennedy visits campus on April 26.

“We demand transparency! We demand a president that represents the students!” reads a poster advertising the rally.

Gonzales said that since the announcement, she has not had much time to do her own research on Kennedy, but that “some of the things I’ve read, I’ve been pretty surprised.”

“We would definitely want to hear what the students are thinking [about Kennedy],” she said.