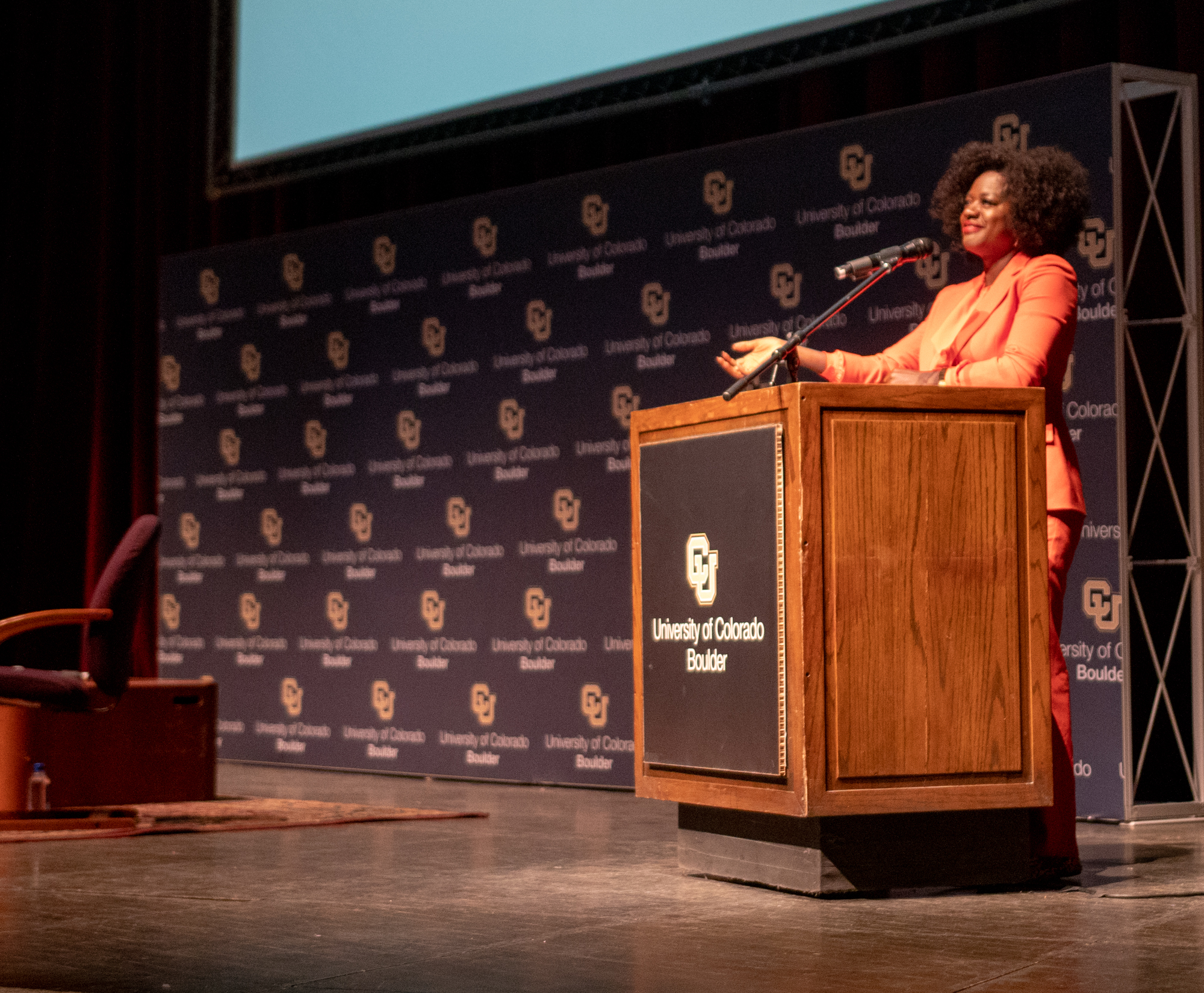 On Thursday, Viola Davis graced the stage at a sold-out Macky Auditorium as the audience, many of whom waited in line for over an hour, applauded uproariously.

The Fences and How To Get Away with Murder actress connected with a diverse crowd on an array of topics including race, her background and Hollywood, while injecting her address with candid vulnerability and kernels of humor.

“With each story, there were more than a few times she was giving me tears and emotions because it was so sentimental, and then just tears of laughter,” CU freshman Kolondja Thillot said.

Commanding the attention of the audience with her theatrical candor and a striking orange-red pantsuit, Davis captivated the audience that greeted her with a standing ovation as soon as she took the stage. When the welcome eventually died down, she began: “You know when you’re a kid and dream about applause and then when you’re older you gotta live up to it?” she asked.

Most of her address involved stories about her beginnings in extreme poverty, experiencing racism in Rhode Island and her heroic rise to the top.

Making a point to not omit the pain, she repeated the phrase, “I’m gonna be honest because not a lot of people will” throughout the night.

With the passion and grace of an Academy Award-winning performer, Davis detailed her anxieties, her acceptance of the past and the difficulties with finding fulfillment that persist even now.

“Everything she said really resonated with me and I think we all found something to relate to when she was talking, even about the deepest and darkest things that she shared from her life,” CU junior Shreya Ghosh said. “I am really grateful I had the opportunity to hear someone like her share her opinions, and her stories. She made it all so real.”

Davis talked about a night at six years old when her older sister urgently insisted that she decide what she wanted to be as an adult if she didn’t want to end up in poverty. Several years later, when she saw Ms. Cecily Tyson on screen, “the wind stopped” — she began hurtling toward the timeline which saw her through Julliard, being the first black woman to win an Academy Award and international recognition.

“I think that Viola Davis is very powerful and charismatic in the way that she is able to speak on how our personal backgrounds, our fears and dreams are something we carry with us,” said Shruti Kaul, a junior at CU. “When we have them at the forefront of our decisions, we can have a more worthwhile existence.”

Davis found significance in life through the production company, JuVee Production, which she operates with her husband. She uses this as a vehicle to lift other people of color up and give them a seat at the table where they are in command of their own narratives. In life, helping others is the only option.

“My elixir to you is to run your race and pass the baton, don’t keep it just for yourself,” she said.

In response to audience questions submitted via social media hashtag #DavisCU, Davis spoke about working with white allies in the TV and movie industries of Hollywood.

“I don’t let them off the hook,” Davis said. “Artists and actors of color have to alter and water ourselves down for Hollywood, but I refuse to be pacified.”

Taking media representation into her own hands, she shared the ambitions of JuVee, which aims to find emerging artists of color and bring their stories, scripts and dreams to life.

“Everyone started out as unknown,” Davis said. “You must become the change you want to see.”

Davis joins the ranks of a collection of accomplished individuals invited to speak at special events put on as a collaboration by the Distinguished Speakers Board and the Cultural Events Board.

“An Evening With Viola Davis,” they explained, fulfills the missions of both student groups that exist in part to the University of Colorado Student Government.