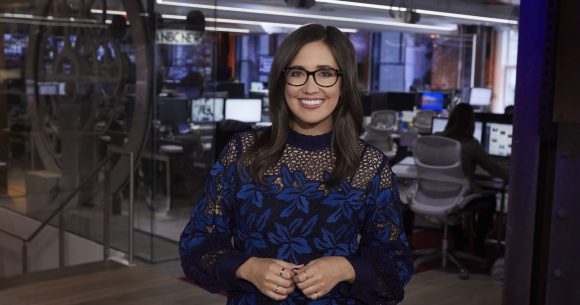 Savannah Sellers, NBC and MSNBC news correspondent and University of Colorado Boulder alum, is set to deliver CU’s commencement address on May 9 at Folsom Field. The 27-year-old is best known as co-host and star of “Stay Tuned,” NBC’s Snapchat news spinoff for Millennials and Generation Z.

A Buff who has “made good,” Sellers launched into the news media industry a month after graduating from CU in 2013 when she moved to New York City for a paid fellowship at NBC. CU associate journalism professor and documentary filmmaker Kathleen Ryan called her a “rising star in the industry.”

“If she stays on this trajectory I don’t doubt that she’ll continue to blaze trails, break important stories and help to redefine journalism,” Ryan said.

The CU Independent spoke with Sellers about her time at CU, her experience as a journalist and what she hopes students will take away from her speech in May.

Q: What was your reaction to being invited to your former university to give the commencement speech to the graduating class of 2019?

Sellers: It means everything! I am freaking out that I was asked. I’m so excited and honored and I honestly cannot believe it myself. I can’t think of a bigger honor. I can’t think of something more incredible as a young person still, to be asked to come back six years after graduation and be in that stadium. It’s totally full circle for me. It’s so touching to me when I was asked and heard from Chad Brokaw, the senior class president, that I was their first choice, that they looked at me as having done something, and think I have something to share. One of my first thoughts was like, “Are they sure? Is everyone going to be disappointed that it’s me?” But once I sort of pushed through that, there’s nothing that could feel more special, and to do it at my own school is so meaningful.

Q: Tell us a little bit about what your life as a Buff was like, do you still keep in touch with those you knew during your university days?

Sellers: My experience as a Buff was fantastic! My best friends are my roommates here in New York, and also my best friends that live elsewhere, it’s given me a network for life. It was everything you wanted college to be. The amazing college town surrounding the school, the football games, I was a member of a sorority. My experience was incredible, I would not change it for the world, and I honestly believe it prepared me to get where I am. The things that I learned, I use all the time still.

Q: As I understand, you were a broadcast major in what used to be the school of journalism and mass communications. Having spent so much of you undergraduate years in a journalism focused environment, what is it like to be in your career now?

Sellers: Truly such an incredible experience, living that in real life now. Being in a live studio, now knowing what a control room looks like, so incredible how much that class prepares you for the real-life experience of going into this job. Kathleen Ryan was a professor of mine and she oversaw my thesis which was about women in network news. It was such a cool subject and it’s so cool now to be a woman in network news. At NBC, we have the Today Show led by Savannah and Hoda, the only two-woman-team and it’s applicable to where I go, to be able to think back to that now.

Q: What do you like most about the job you’re doing now?

Sellers: It’s pretty incredible to have your dream job! If I could’ve picked or dreamt it, it would be this and ended up being even more than that. I would have wanted to be on air on the news, in New York and to be doing it for a heavy part of my job, to be on Snapchat and the coolest part about that is that I have this dream job but it also honestly feels like I’m making a difference in the world. My favorite things to hear from viewers of the shows, when they reach out to me personally on Snapchat, is that they never cared about the news or what was going on in the world until they found my show. To be able to feel like I’m impacting a generation and making them be aware of their surroundings, making them consumers of information that is true and factual and to make them want to invest in making the world better, or at least understand it a little bit more, it just feel like it’s more than I could have ever gotten from a job like this.

Q: What do you hope students take away from your speech in May?

Sellers: I hope they walk away feeling excited and hopeful about what they are about to step into, not just scared or upset about what they are walking away from. I hope they feel inspired that you can get out there and put yourself on a path to get the life that you want. You can lean into what it is that you’re good at, that’s you’re passionate about, and get that by making your own path you don’t have to follow a bunch of other conventional ways of doing things. Had I followed the path I’d seen other people do I would not be here at all, which is exactly where I want to be. So I hope they feel encouraged to trust their gut on what makes them tick, what makes them, them and I hope it makes them run out and do big things.