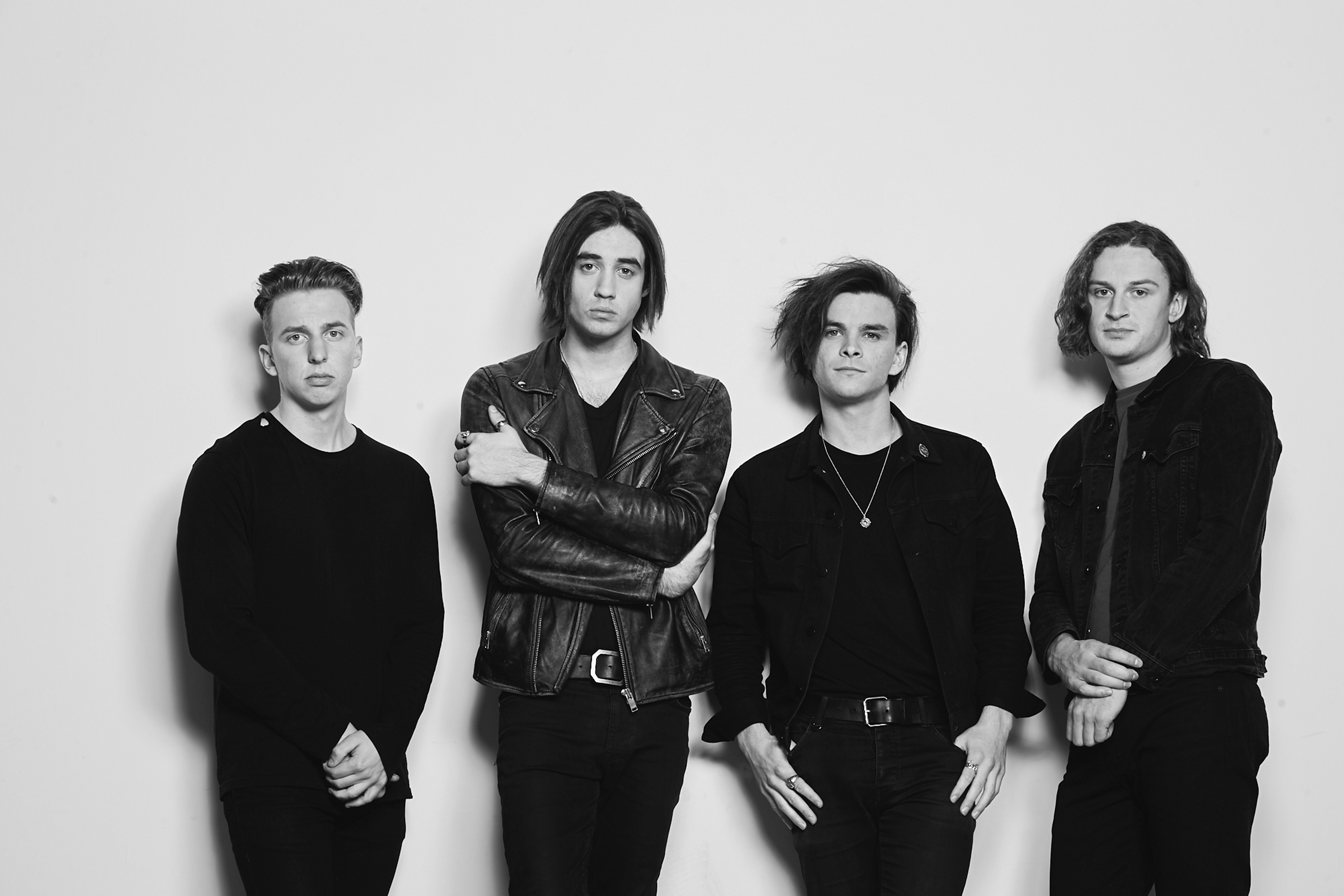 The Faim has been making waves since their debut single “Saints of the Sinners” dropped in February 2018. Since then, the Australian group from Perth has exploded, releasing their debut EP last year and working with icons such as Fall Out Boy’s Pete Wentz, Twenty One Pilot’s Josh Dun and Blink-182’s Mark Hoppus for their debut album, set to drop later this year. Their latest single “Amelie” was released on March 28.

Now, they’ve hit the road as openers for Black Veil Brides frontman Andy Black as part of Black’s Ghost of North America tour. CU Independent writer Bri Barnum recently chatted with vocalist Josh Raven to discuss the band’s latest single, their upcoming album, evolution as a group and their current tour, which hits the Gothic Theatre April 17. This interview has been edited for clarity purposes.

It’s been just over seven months now since you released your first EP, “Summer Is A Curse.” How have you evolved musically as a group since then? And how are you applying this evolution to your music going forward, especially with your upcoming full-length album?

Well, the main thing I think as a group and us growing is we’re constantly, not necessarily critical, but very open and transparent with each other — if we do like something, if we don’t like something. We’re very honest about that, and we speak our mind and really give each other a chance to voice our opinions. The biggest thing that we’ve discovered, sort of this year in general, is keeping true to our roots and keeping true to what our message is.

Especially lyrically, it’s nice to really go into something that’s very real and very personal and from that sort of standpoint. As for the album, it’s nice to utilize this message musically and kind of showcase that as much as possible, because we have a pretty eclectic music taste, from Metallica to Red Hot Chili Peppers to Coldplay to Frank Sinatra to everything under the sun, really. And especially today with music being so diverse and amalgamating together, it’s very exciting to put those perspectives together, so that’s the big thing. We’re just trying to find our own unique niche among the world of crazy funk, which I feel like we have with this album coming up.

Your newest track “Amelie” is a fantastic pop-rock examination of how we as people are influenced by our surroundings. What was the inspiration for this track? And how does this fit into the narrative of your upcoming album? Especially since it’s such a tonal shift from “Fire,” which took a much more melancholic and introspective approach.

I think the song was definitely derivative from experiences in my life with relationships and events and people that I have known, people who are very close to me. You know, past relationships as well, but it was mainly kind of utilizing the fact that we really wanted to talk about how in your life uncontrollable circumstances tend to define you. How sometimes, no matter how hard you try, no matter how much trouble you put yourself in, the world can sometimes bring you back and push you back into the mindset of believing that sometimes there isn’t really much hope or sometimes, maybe, you feel like you’re really not going, which is an unfortunate thought that I think is very common in today’s generation — especially for kids who grow up very distracted and very into their phones and not so much into the real world instead into the world that’s going on around them. They kind of forget to emotionally develop themselves or think about their own lives. And then when they become faced with uncontrollable circumstances, emotions are just 100 times more intense than ever, really. That’s where “Amelie” came from.

And is that going to be a reoccurring theme in your album this year, or is it just kind of a small piece of the overarching narrative?

I’d say it’s a small piece because I’m a very optimistic, very positive person. A lot of people view my world as very intense or negative or insane or whatever it is, but I feel like we want to reflect our personalities as much as we want to reflect our message, our story, our vision with people. We want to inspire people to look out for themselves, be at peace with themselves and find what they couldn’t before, especially when it comes to the live shows. And I think that’s something we’re trying to portray with the album. I think that’s the biggest thing we’re trying to put out in a way that’s still cohesive and cognitive with our vision.

And following the departure of Sean Tighe and Michael Bono from the band, you welcomed two new members, Samuel Tye and Linden Marissen. What have they brought to the table, and how do you guys see yourself growing together as a band this year?

Not only are they incredibly talented and dedicated musicians, but they’ve also brought their very vibrant and very welcoming personalities. I’ve known them for so many years, as well. We couldn’t imagine having anyone else try to fill that sort of spot, you know. Obviously, it’s hard with bands and stuff to try and change that dynamic, but when friends come into it, and I’ve known Sam for pretty much 11 years now, for us it’s always been about creating an environment to feel relaxed and feel comfortable with ourselves and comfortable expressing ourselves to each other. If we don’t have that then there’s no point in really trying to write songs together, and ever since we’ve tried to write together, it’s been a perfect fit ever since. We haven’t looked back, and it’s just been better than ever.

You work with an amazing array of legends within the pop-punk sphere, including Pete Wentz and Mark Hoppus. How have they influenced and guided your work? And what do you hope to gain from being on the road with Andy Black for the Ghost of North America tour?

The thing we’ve learned from the different people that we’ve worked with is that everyone has their own vision and their own unique experiences that make up their vision. And Mark Hoppus was someone who kind of opened us up to the idea of just being relaxed and just creating an environment where everything is fun and happy and not necessarily too serious or too overcomplicated. And Pete Wentz, you know, he was really helpful to us because he helped us write our song called “Saints of the Sinners,” and that song is about making a mark in the world. What makes you the person that people should listen to or hear? And that kind of really stuck with me, because at first I didn’t really know, and I was asking myself ‘What do I want people to hear? What do I want people to think when they leave our show?”

In terms of the Andy Black show, the biggest thing we’re trying to gain is not only more  practice with our new songs and being able to play to incredible new crowds and in incredible new places, but really just meeting people within the industry and within our world, because that’s just what we love doing.

We love playing music. We love playing shows no matter where we are or what we’re doing. And Andy has been a really big advocate for what we do, and we’d met him quite a few times beforehand through John Feldmann. It just felt like a perfect fit. We’ve got so much respect for him and the album that he’s just released. We’re just very happy and excited to learn from him and be able to watch his show and try and improve our own set and learn from people who have definitely made it in this industry.

How has it been embracing your newfound fame and just being able to manage that while staying grounded as an individual?

I’m not too sure we have newfound fame, or whatever it is. For me, money and fame have never really been something on my agenda. Just in general, I have always been about a message and a vision, but seeing more people sing our songs and more people coming up to me and talking and sharing their stories and expressing how much they’ve connected with our music and seeing that grow, especially on sides of the world we’ve never been in before, is a very humbling and rewarding experience.

It’s not something that terrifies me, because I love being able to give people a sense of perspective through music, because that’s what music gave me, and music is a therapy for me to listen to. And giving that to someone else is the most beautiful thing I could ask for, and I’m very thankful for that. And if fame grows, it grows, and I’m happy it does, but I love what I do very much.

Finally, what is the message you want your music to send to fans?

At the end of the day, there should be solidarity, a home that they can find within themselves. And with this music, with this band, being able to create a community for people is something that’s very rewarding, so that’s what I hope I can show people, especially with the live set. I’m a bit of a crazy person on stage, so anybody that comes and sees the set is going to be like, “hey, I’m not as crazy as this guy, so I should be fine.” That’s what I want people to really take back.

Bri Barnum is a copy editor at the CU Independent. Originally from Minneapolis, she is a Senior majoring in journalism and Russian studies. When not editing articles, you can find her traveling, taking pictures and watching an obscene amount of documentaries.