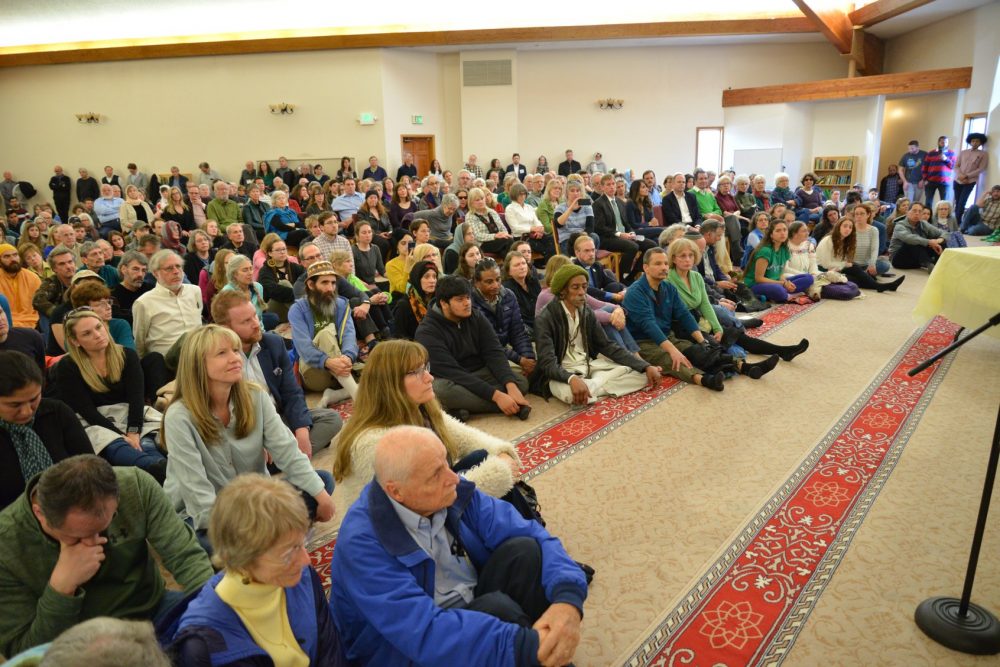 The Boulder community gathers to show their support (ICB/ Facebook)

The Islamic Center of Boulder (ICB) held an interfaith vigil Sunday afternoon in honor of those killed in the Christchurch mosque shooting which occurred on Friday, March 15 in New Zealand. The vigil was attended by hundreds from the Boulder community.

The memorial stretched on for over two hours as dozens of local, political and religious leaders held a microphone to share their condolences with the local Muslim community and to decry the anti-Muslim rhetoric that influenced the attack.

One of those who spoke was Farid Amin, whose uncle Haji Daoud al-Nabi was killed in the Al Noor Mosque during the shooting.

Holding a photo of his uncle, Amin spoke passionately about al-Nabi, a 71-year-old father and grandfather who came to New Zealand about 30 years ago from Afghanistan. He said his family is grief-stricken from the attack but also said that the attacker’s plan has backfired.

“He wanted to plant hate, but people are receiving love,” Amin said. He received a standing ovation from the audience.

The ICB scheduled the vigil after receiving an outpouring of support from the community after news broke that 50 people had been killed in two mosques in Christchurch, New Zealand. The crowd that attended the vigil filled the room, with people sitting on the carpet and standing along the wall. Several officers from the Boulder Police Department were by the door during the vigil.

Sheikh Shoab Al-Zenati, the ICB’s imam, spoke at the beginning of the event.

“Even if the mosque in New Zealand is very far from the Boulder community, we feel what they are feeling,” Al-Zenati said before thanking the community for their support. “Thank you for showing up, and may God reward all of you.”

Griswold, in particular, drew applause and cheers after accusing President Trump of emboldening terrorists with his anti-Muslim rhetoric.

“We have someone adding tinder to a flame when what we need is water,” Griswold said.

Multiple politicians promised to lend the full support of their offices to help combat white supremacy in Colorado and urged people to contact law enforcement if they see signs of anti-Muslim violence brewing in their community.

Jenny Presswalla, a regional coordinator at the Department of Homeland Security, said that white supremacy is a threat in Colorado which she finds very concerning.

She asked people to contact law enforcement if they see anyone displaying signs of becoming radicalized by white supremacy or making social media posts threatening violence.

Jewish, Christian and New Age religious leaders also spoke during the vigil, with many drawing connections to the shooting that killed 11 people at the Tree of Life synagogue only months earlier.

Rabbi Marc Soloway of Congregation Bonai Shalom shared how Boulder’s Muslim community supported them after the attack and pledged to do the same.

“You’ve been incredible neighbors, and it’s our turn to be here for you,” Bonai said.

He led the room in a song pledging for peace in both Hebrew and English.

Rabbi Fred Green of Congregation Har HaShem said he was tired of the necessity of the community gathering to mourn acts of violence.

“I’m tired of this,” Greene said. “This is terrorism. And I’m tired that this is when our community comes together.”

He urged the necessity of people continuing to show up for one another in the days and weeks to come.

Pastor Brian Dare, a former Baptist pastor, shared how members of Boulder’s Muslim community reached out to share their condolences with his congregation after the Sutherland Springs shooting, when 26 people were killed at a Baptist church in Texas in 2017.

He stressed the importance of getting to know people from different groups in the community in order to fully be able to love and support them.

“Not only are we to show love for those who are not like us, but we may find as we reach out in loving compassion to them, that they’re the ones who show us what love is,” Dare said.