CU’s annual MAASU conference drew students from around the country 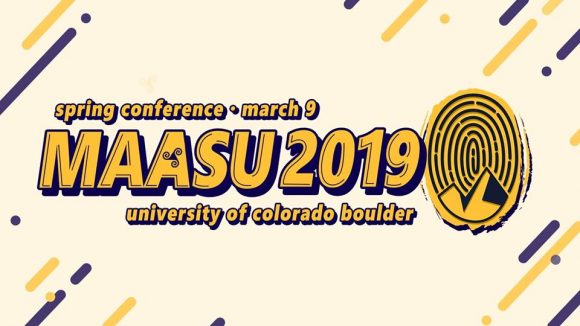 The University of Colorado Boulder held the Midwest Asian American Students Union (MAASU) 2019 Conference this weekend, playing host to over 600 students from across the country who traveled to campus to engage in discussions and panels centered around issues related to the Asian-American community.

MAASU public relations chair Sijia Du said the conference, which is held at differing universities each year, began in response to a need for “support, political unity and activism among Asian American students in the Midwest.”

This year’s theme was “Be Bolder,” as the conference hoped to encourage students to “build and celebrat[e] your Asian American identity as well as other coinciding factors that may make you unique.”

On Friday evening, there was a general meet and greet for attendees in Room 235 at the University Memorial Center to mingle with fellow event goers.

Saturday featured 40 different panels held in workshop format all over campus. Topics and themes varied from “Navigating Patriarchy and its Effects in Asian Culture” to “Breaking the Bamboo Ceiling: Public Speaking & Social Etiquette.” The workshops all touched on relevant points of interest within the larger Asian-American community and brought students from all sides of the Midwest.

Ashley Lai is a 21 -year-old Wichita State University student majoring in social work. She, along with roughly 20 others, made the trip to Boulder via a chartered bus. Lai said she found out about the MAASU event through her association with the Asian Student Conference on her campus.

“I’ve been invited to this event for two years straight and have been wanting to network and get to know the deeper issues in our community because we all intersect in some way through [the] walks of life,” Lai said.

She cited mental health as a topic of interest of hers and planned on attending a workshop titled, “(Re)Claiming Your Mental Health as an Asian American”.

“Asian-American kids have a stereotype of having academic pressure on our ourselves because our parents expect more, so I think mental health in general is important for us,” she said.

Vue, a first-time attendee, hoped to soak in new perspectives and bring them back to Hamlin.

“The university I’m attending is lacking a space for students of color,” Due said. “I’m here to connect and share narratives to find a safe space to talk about issues that are happening in the Asian American community.”

Vue also expressed interest in “how the platform of social media is used to advocate for Asian Americans” and cited the workshop entitled “Social Media as a New Political Platform” as one such event that intrigued her.

All students attending were sorted into “families” of 10-12 people, guided by CU students working for the MAASU Boulder chapter.

“The goal is to network various Asian-American student organizations across the country and to get a lot of people, create and establish bonds as well as attend workshops to become a better person and get a better understanding of the culture and the various other ideas that surround Asian American culture,” said Michael Ren, a junior computer science major at CU and one of the conference’s “family leaders.”

While the majority of students traveled to Boulder from other states, Colorado natives joined in the the conference as well.

Julian Ornelas, an 18-year-old student at the University of Colorado Denver, said he came into the event with a blank slate.

“I’m here just to learn more about the community,” Ornelas said. “I am Southeast Asian and [my family] is from Nepal…I want to be more involved in the Asian community. I feel like [this weekend] is more about empowerment of the community and also yourself, to learn more. It’s going to be really interesting.”

The chance to network with like-minded people was consistently highlighted by event-goers.  Students were encouraged to interact with each other and talk with people from different states and schools.

Even for those lacking a personal stake in issues pertinent to the Asian American community, the MAASU Spring Conference provided an opportunity to engage in discussion and debate.

“I’m not Asian…[but] I took [the chance to come] as an opportunity to learn more about the whole Asian community,”  Ratish Vangol, a CU Denver student said. A guidance counselor offered this opportunity and came along for the ride with Ornelas.

Events began on Saturday shortly before 9 a.m. and continued throughout the day, with a short break for lunch, before the conference wrapped up in the evening and attendees said their goodbyes before leaving campus, many having learned new information and perspectives on Asian-American culture and their own lives.