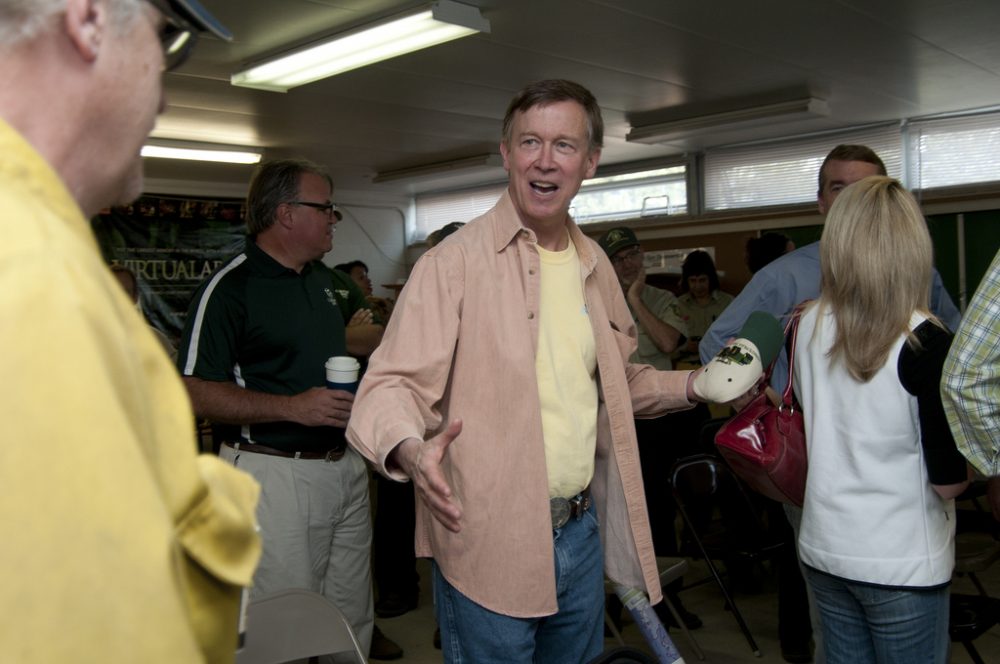 Edit: A previous version of this article stated that Hickenlooper expanded Medicaid to 95 percent of people in Colorado, when in fact Medicaid was just one service that contributed to 95 percent of Coloradans gaining healthcare during his time as governor.

John Hickenlooper kicked off his bid for the Democratic presidential nomination Thursday night as he spoke to a crowd of 5,000 supporters in Denver’s Civic Center Park.

The former governor faces a competitive and well-funded field for the Democratic nomination, a fact he acknowledged.

Hickenlooper delivered an impassioned speech not shying away from directly attacking President Trump.

“Donald Trump is alienating our allies, ripping away our healthcare, endangering our planet and destroying our democracy,” Hickenlooper said.

He believes that the only way to end the “Trump crisis of division” is with a leader who knows how to bring people together, something Hickenlooper believes he is the right to do.

He went on to remind others of his accomplishment’s during his time as governor, saying his gubernatorial experience sets apart his candidacy from a large pool of U.S. Senatorial candidates.

Hickenlooper mentioned passing universal background checks and limits on high capacity magazines after the Aurora shooting, expanding healthcare to 95 percent of Coloradans, enacting the toughest methane regulations in America and taking Colorado from the 40th to number one economy in America as some of his achievements.

All of this was used to underline his ability to be a “bridge builder” and bring many different groups to the table.

“It’s time to end this American crisis of division. It’s time to bring all Americans together,” Hickenlooper said.

It’s a message of positivity that is not uncommon for the Colorado politician, who, during his gubernatorial run in 2010, pledged to not use negative advertisements against his competitors.

In 2014, Hickenlooper signed the College Affordability Act into law, other wise known as the Colorado College Opportunity Fund, which stipends $85 for each credit hour taken at a Colorado public university and $43 for credits taken at a private university. The act  decreased student loan debt for thousands of CU students. In addition, students whose expected family contribution up to 250 percent of Pell Grant eligibility can receive Colorado Opportunity Scholarship Initiative (COSI). It provides tuition support by matching funds for community scholarships in an attempt to make college tuition more affordable for disadvantaged students.

Hickenlooper hopes to take his experience in making higher education more accessible for Colorado students to the entire nation. He also hopes to focus on vocational learning and skills training as a way to meet the demands in various flourishing industries.

“We’ll create a whole new understanding about the future of work,” Hickenlooper said.  “The majority of today’s young adults who want tomorrow’s skills will be able to shape a 21st-century economy with better jobs.”

First time voter and student at the University of Colorado Denver, Andrew Ward, says he didn’t know much about Hickenlooper before, but after doing some research and hearing Hickenlooper speak, he liked what he heard.

“I think he’s great!” Ward said. “This is the first time I am going to be able to vote so I want to be able to make an informed decision.”

But for some young voters say they are still on the fence about who they support for the presidential bid.

Brooke Carter, another CU Denver student, said she attended the kickoff event to learn more about Hickenlooper and his objectives. She admitted she is partial to presidential candidate Bernie Sanders. Carter said she wants a change in government from the current administration.

“I’m leaning towards Bernie, I have wanted to vote for him since I was 12 years old,” Carter said. “I just want someone who is the complete opposite of Trump.”

Democrats are seeing one of the largest and most diverse pools of presidential candidates in several years, with the first of 12 Democratic presidential debates set to begin in June of 2019. Democrats won majority control of the House of Representatives in the 2018 midterm elections, with the largest turnout of 18 to 29-year-olds in the last quarter century, a demographic that may be essential for candidates like Hickenlooper to claim the nomination and win the presidency.