Google’s Abigail Posner assures audiences that ‘we are all creative’ 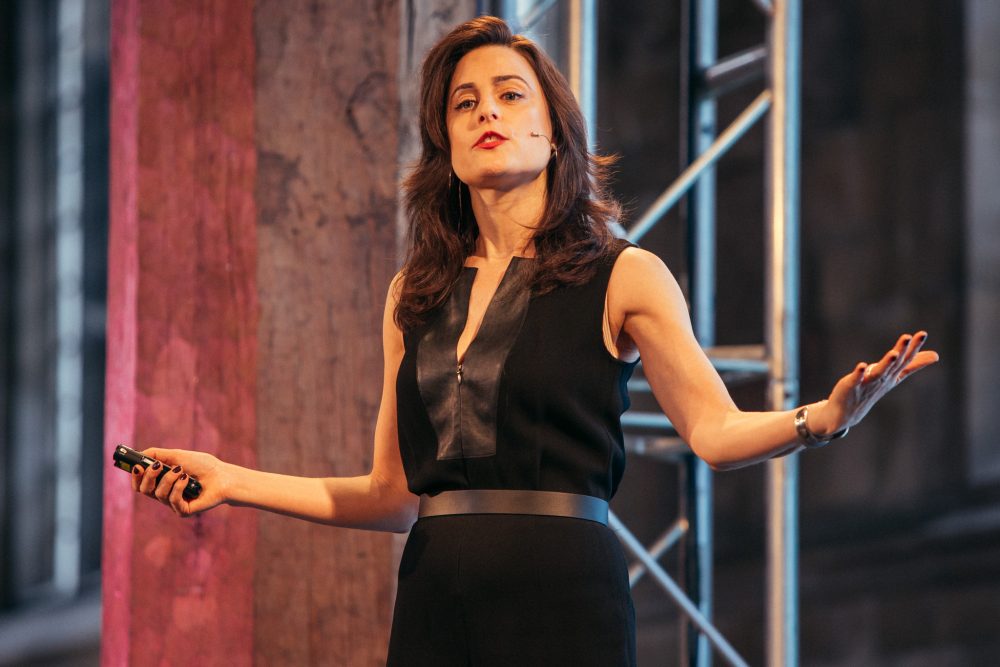 Google executive Abigail Posner remarked “we are all inherently creative” to a packed crowd in Macky Auditorium on the University of Colorado Boulder campus Tuesday night.

The technology strategist was invited to CU as a guest speaker for the university’s annual Leo Hill Leadership Series, which sees industry leaders give insight to students and community members.

Posner serves as the head of strategy for Google’s Brand Unit and has worked with companies such as L’Oréal, Dove and Coca-Cola. She focused her talk on how audience members can achieve their inner creative potential, something that Posner believes is what makes great leaders of today.

Posner believes industry leaders are no longer in their positions due to “military might” or because they “came from the right family” but because they are “game changers.” It’s the ideas that come about in the fields of technology, medicine and academia that drive today’s leaders, according to Posner, who then asked the audience, “how do we tap this innate sense of creativity?”

For Posner, it’s about asking the question “why?”

Posner recalls her “quest for the why” during her years in college when she studied social anthropology, a study that forced Posner to understand “why people do what they do.” Her interests grew to understanding what attracts people to products as she delved into the advertising industry, and now, working at Google, she asks the question of why people have the relationship they do with technology.

“Speaking of Google, no invention, no innovation doesn’t first start by asking ‘why?'” Posner said.

She used the example of self-driving cars, a technology Posner says was created when a group of senior engineers were examining major causes of deaths in the United States, of which automobile accidents is one. Posner says these people asked “why?” which turned to “what if?”

It’s a question that is asked in daily instances of life. If a baby is crying, Posner said, we ask “are they sick, do they need their diaper changed?” and then figure out what they need.

“Without this innate sensibility to seek the ‘why,’ our species would not survive,” Posner said.

Leading from this, Posner spoke on how attendees can take the question of “why” and channel it to an idea, something Posner says don’t just “fall from the sky.” Instead, you have to “look for the links.”

“Creativity is making connections that others haven’t,” she said.

Posner gave the example of common products, such as spray sunscreen, which according to her is a combination of creamy suntan lotion and pam cooking spray. Fantasy football is football meets online gambling. Uber and Lyft are taxi services that coincide with online meal reservations.

These products show “worlds coming together.”

Posner recognized that these connections are not always easily made and require people to be open to lots of stimuli that adults all too often “filter out.” Young children, on the other hand, thrive in making connections. For Posner, who has three children of her own, she sees the creativity her children are able to achieve by living in a world without “adult filters.”

“This ‘no filters’ is a beautiful thing,” Posner said.

Children are not restrained by societal criticisms or expectations and let their ideas “flow” and build upon them.

“Put the dinosaur in the Barbie bathtub, why not?” Posner said. “Anything goes together as long as there’s a connection.”

Posner asked all audience members to look for the links in their everyday lives and to allow worlds to merge as a way of seeking creative ideas. She cautioned, however, against people making this a solo feat and urged all attendees to “not try to be creative on your own.” For Posner, creativity comes the most naturally through diverse collaboration between people.

Following her talk, CU freshman Nic Lawrence, who is majoring in strategic communication, found that much of Posner’s lecture resonated with him.

“It was cool to see how what we’re learning actually applies to the real world and where [Posner] has been,” Lawrence said.

“Being in higher education, it’s usually very siloed,” Metzer said. “Being in a marketing aspect in a university, it’s nice to be able to find those connections and work in a collaborative environment.”