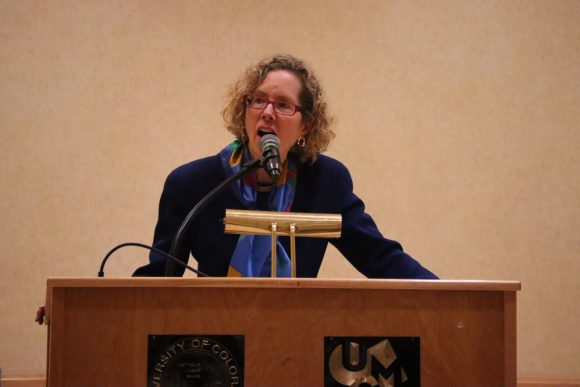 Political commentator and author Heather Mac Donald told a crowd at the University of Colorado Boulder that “every student who is enrolled in this university is among the most privileged human beings in history” during her lecture Wednesday.

Mac Donald assured audience members that she uses the term “privilege” in a positive way, as she began to discuss how issues of gender and race are trivial and undermining higher education. Her speech was hosted by CU’s Center for Western Civilization, Thought and Policy.

“Students across the country are taught to think of themselves as victims, and to see bigotry where none exists,” Mac Donald said.

The conservative guest speaker insisted that faculty at CU Boulder are not bigots and that every university actively tries to seek out minority students. Mac Donald believes that when it comes to students at a university, everything is seen through the lens of “oppression and identity politics.” To Mac Donald, the fear of safety felt by minority students on a campus is untrue, prompting laughter from the audience.

The use of “self-censorship” on university campuses is something Mac Donald railed against, believing discourse centered around identity to be “educational malpractice” and “preposterous.”

“The students who are not completely on board with the dominant ideology are scared,” Mac Donald said. “And that’s true of the faculty as well.”

One of Mac Donald’s main fears from the prioritization of identity is that it is making youth, particularly college students, “narcissistic.”

“Being female is not an accomplishment,” Mac Donald said. “It’s not a particularly interesting trait and it is certainly not one relevant to scientific achievement.”

Youth were frequently targeted by Mac Donald as a demographic that needs to move on from a fixation with identity. She believes that youth are not experienced enough to speak on such issues as politics and economics.

“I don’t know why I should listen to a 16, 17, 18-year-old tell me about the evils of capitalism,” Mac Donald said. “Youth are taken as somehow paradigms of wisdom.”

“I don’t believe that there are bigots at the University of Colorado Boulder,” MacDonald said. “I believe that every faculty member here is open minded and supports students.”

Mac Donald went on to give an example of an instance of discrimination and identity being taken too far. While at the University of Pennsylvania, Mac Donald claims a student was failed by his professor after his professor learned that he was gay.

Mac Donald’s comments were not met without opposition. An audience member said that he wanted to speak up for the younger generation and questioned whether Mac Donald was falling into “white victimhood.”

Mac Donald rejected this claim, saying that young people’s fixation on identity politics is teaching them to “hate.”

A younger audience member questioned Mac Donald’s insistence that identity prioritization is dangerous, saying that it is important for people to see others like them.

“I want to see someone who might have had a similar experience to me,” the student said. “It’s about someone looking up to you…and I don’t see what the threat is.”

“Because I don’t know what a person like yourself is,” Mac Donald responded. She said that she is not going to assume who someone is based on their race and gender.

“I strive for an ideal that there is a realm of reason and fact that we can reach that is not dependent on something that I think is ultimately superficial…which is skin color and gender,” Mac Donald said.

One audience member asked Mac Donald to clarify her statement that there are “no bigots in Boulder,” to which Mac Donald stated that she was specifically referring to the university.

“That’s not true,” said Hillary Potter, associate dean for Inclusive Practice in the College of Arts and Sciences, standing from her chair.

“To make your sweeping comments is so irresponsible,” Potter said. “It is not true to say that there is no faculty member on this campus that is not bigoted.”

Potter asserted that she has been on the CU campus for 21 years and she has experienced discrimination. Potter said that Mac Donald was “denying” her experience and the experience of many other students.

Potter spoke to the CU Independent following the event, saying that she believes Mac Donald is not as informed as she should be. Potter said that while she supports CU bringing speakers with differing perspectives, she feels that there could have been better candidates than Mac Donald.

“[Mac Donald] is just spewing these thoughts and is not well researched and not well read,” Potter said.

Katina Hutchinson, a senior at CU, found the talk “disrespectful” and “ignorant.” While Hutchinson said that she understood Mac Donald’s argument that faculty are self-censoring, she believes that CU has bigotry.

“Inclusivity is a huge problem,” Hutchinson said. “And it’s because we don’t have people who are in positions of leadership who are bound by it…there’s a lot of talk and no show.”

“CU is a leading university in conversations, but not actions,” she said.