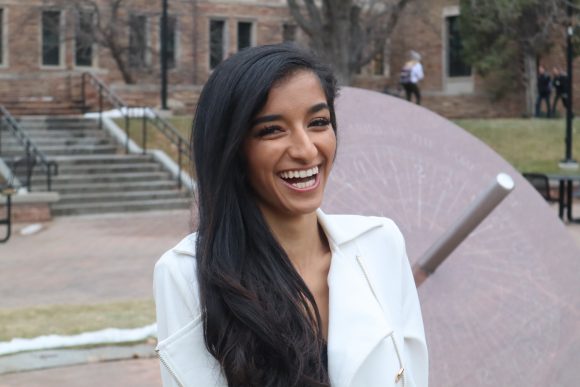 Serene Singh, a senior student at the University of Colorado Boulder, is among 32 nationwide recipients of the Rhodes Scholarship to study at Oxford University next fall. Singh is the first CU woman and Sikh to win the scholarship, as well as the first student from CU to do so in 25 years.

Singh said her reactions to becoming a Rhodes scholar were “gratitude, excitement and shock”.

“No one goes into the Rhodes Scholarship interview thinking they’re going to come out,” Singh said.

For Singh, applying for the scholarship had been a vision of hers from a young age. Singh recalls first learning about it in middle school and said she always felt it was something that was only for the most elite members of society. Singh did not envision that she could ever be a contender.

It wouldn’t be until her junior year of college that Singh would seriously consider an application.

“I said ‘well if you’re not trying, then you’re definitely going to lose’,” Singh said.

Singh sees the scholarship as one that is rooted in passion and leadership. Singh herself has been involved with multiple community initiatives in the past several years.

As a freshman, Singh co-founded the Sikh Student Association (SSA) in 2015 in order to raise awareness of Sikh culture on campus. Recently, the student group hosted the first ever Langar on a college campus in Colorado. Langar involves people coming together to share in a meal regardless of religion, caste, gender or ethnicity. For Singh, hosting the Langar was very important.

“For us, Langar was an interesting way of showing what we represent, not just telling it,” Singh said. “[Langar] is rooted in equality, justice and love and that is exactly what the Sikh faith represents.”

Singh also founded The Serenity Project, a non-profit aimed at empowering women in at-risk communities, during her sophomore year in 2016. The project stemmed from Singh’s participation in Miss Colorado Teen beauty pageant, which Singh says taught her about confidence and individuality. Singh became the first Sikh and Indian to win the pageant in 2016. However, Singh acknowledged that not everyone has the access to time and the financial resources that are needed to compete in such pageants.

This led Singh to work alongside other organizations such as Phenomenal Women Incorporated which focuses on mentorship with young women. The Serenity Project helps women who may be at risk of death by suicide, such as survivors of human trafficking, abuse, and women who suffer from body dysmorphia. Singh sees the organization as a way to give these women the ability to be confident in their own beauty.

“For like one night, these women are the showstoppers,” said Singh. “They’re celebrities. Everyone wants their autograph, their photos, and that’s building them up.”

Throughout the rest of the year, these women are given mentorship opportunities to work with projects that are important to them, such as working with foster care.

Singh aspires to one day serve as a Supreme Court Justice for the United States. For the past four years, Singh has served on the Supreme Court for CU Student Government (CUSG) and currently serves as Chief Justice.

Singh commented on the change she has seen in the judicial branch of CUSG. As a freshman, she said the branch lacked legitimacy. During her first year, the court had several unfilled positions and students were not paid like other divisions of CUSG. However, Singh is now proud that CUSG has a full court with many more women serving than before. The court also now has equal pay alongside the other branches of student government.

“These are all things that we did,” Singh said.

When asked how these leadership experiences helped her to become a Rhodes scholar, Singh reflected on her own passions and identity. Singh said that her historical roots in India make her think about her family and community members, particularly young women, who will never have the opportunity for a scholarship like Rhodes. This led Singh to develop an interest in women’s education and access.

Singh said that her involvement in the Sikh Student Association, The Serenity Project and CUSG Supreme Court are all instrumental to who she is.

“I think that I could not be who I am if I wasn’t engaged in those types of things,” Singh said. “I just want to take all of that with me wherever I go.”

Singh plans to study criminology and criminal justice for a masters degree in her first year, followed by a masters in evidence-based social intervention and policy evaluation. She hopes to gain a better understanding of the flaws of the judiciary and criminal justice system, and discover what can be done to reduce violence in the United States.