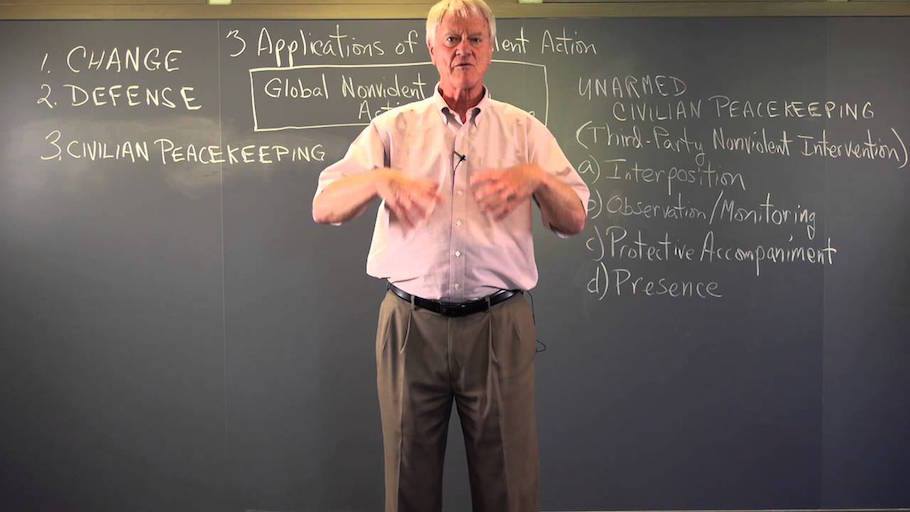 On Monday, Nov. 26, sociologist and activist George Lakey spoke to CU students about methods for successful activism as outlined by his new book, How We Win: A Guide to Nonviolent Direct Action Campaigning.

Held in Hale Science, Lakey’s presentation was sponsored by both INVST Community Studies and the Department of Media Studies at CU. His speech was preceded by INVST program director Sabrina Sideris and CMCI media studies professor Nathan Schneider, who spoke of his current work with the Earth Quaker Action Team (EQAT).

Lakey, age 81, has participated in many activist movements in the United States in the past several decades, including the civil rights movement of the 1960s and the LGBTQ rights movement beginning in the 1970s.

Lakey began by reminding audience members about the history of political activism, referencing the economic and social change that occurred in Nordic countries during the 1940s. Lakey said that while Nazis marched through the streets of Oslo, Norway, others were actively organizing for socialism.

This dichotomy, Lakey explained, is when change is most present, using the analogy of heated metal to explain.

“What polarization did was took the rigidity of the society and heated it up, made it volatile,” Lakey said. “Made it possible to do stuff with.”

Lakey proceeded to outline the ways that activism campaigns can bring about change. He mentioned the need for movements to have a “direct action campaign”, in which a movement focuses on a goal and targets an opponent who can meet their demands. This leads to multiple movements which work together, described by Lakey as a “movement of movements.”

He then opened his talk up to audience questions.

One audience member spoke to the importance of modern political movements in the United States, like Black Lives Matter. She said that when she married a black man in Colorado, it was still not legal in a large portion of the country.

“I have not just children, but grandchildren and great-grandchildren to worry about at this point in terms of police officers,” the audience member said.

Other members used the time to spread awareness of movements and campaigns that were important to them.

A group from the Rocky Mountain Peace and Justice Center pointed the audience’s attention to an “8-week, bi-weekly conflict resolution workshop series” that they will begin in January of 2019. This came in response to Lakey’s emphasis on non-violent protesting.

Another audience member spoke about a man from Longmont named Victor in need of a heart transplant. He said Victor is unable to be placed on the transplant list in Colorado due to his immigration status. He then pointed the audience to a fundraiser dedicated to helping him retrieve private health insurance so that he can be given a heart pump.

Following this, Lakey gave one of his final tips in creating successful social movements: to “get close to people.”

“Form campaigns not only with people who want the same goals as you want, but also people who are willing to be human with you,” said Lakey.

To help Victor receive a heart pump, donations may be directed to his GoFundMe page.