Proposition 112 fails to pass, considered a success to even be on the ballot 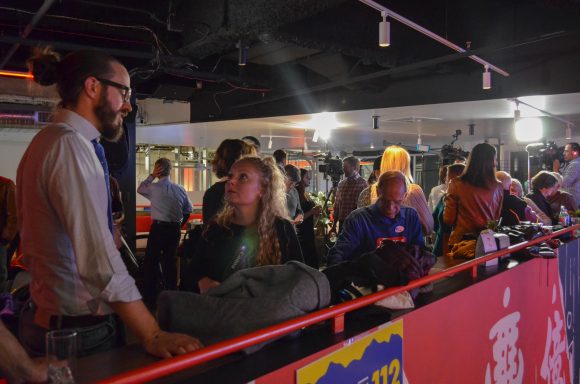 Supporters and reporters mingle at Big Trouble in Denver, Colo. as they wait for the election results to come in. (Sara Cottle for CU Independent)

“We’ve done far more than anyone would have thought we could,” Olson said.

If the proposition had passed, it would have required all new oil and gas development projects, including fracking, be a minimum distance of 2,500 feet from occupied buildings and other areas that are considered vulnerable, including homes, schools and hospitals.

Current regulations only require the projects be 500 feet from homes and 1,000 feet from schools. This excludes school playgrounds, which projects can be built right beside.

Colorado Rising, the main supporter of the bill, spent over $1 million on efforts to raise support. Those in opposition of the bill, including oil and gas corporations and councils and energy companies, spent over $30 million. Opposition to Prop 112 was led by Protect Colorado.

“I think why you’re seeing so many people come out against this in the state, including some of the leading Democrats in the state, is because it is a very blunt and divisive measure that does not allow for a rational dialogue or reasonable conversations to be had which is typically how we do business in Colorado,” said Dan Haley, president and CEO of the Colorado Oil and Gas Association.

Haley also cited economic reasons for why he was opposed to the proposition.

“There is a potential if this were to pass of up to 147,000 jobs being lost in Colorado over the next 11 years and the total loss to Colorado’s economy of up to $217 billion over that same next 11 years,” Haley said.

Many of those in the fight to get Prop 112 on the Colorado ballots had felt some of the oil and gas company’s lines regarding economics were just scare tactics.

“Either way it is an incredible feat to even get this far,” said Micha Parkin, executive director of 350 Colorado. “When you’ve been outspent 40-1, to even be here tonight is an incredible victory. It just shows the power of grassroots to fight against the propagandistic and deceptive ads and scare tactics.”

Parkin believes the supporters are here to stay.

“I think people are waking up,” Parkin said. “I’m so grateful to the thousands of people who will keep doing this.”

“We know that these conversations reached voters across the state of Colorado,” said Hannah Fertig, field staff for the Get Out the Vote campaign. “We were able to talk to people on the western slope from Denver.”

While the Colorado Democratic Party endorsed Prop 112, Democratic governor-elect Jared Polis is against the measure, saying he believes it “will all but ban fracking.”

Despite the proposition failing, supporters feel there are still other ways to make their voices heard. Cristin Logan, another mother and Broomfield resident, believes that the legal and court systems have been underused in this fight.

While the fight appears to be forcing a choice between health and safety and jobs, some think there’s an option in between.

“I would like to think that we can agree that this is an industrial activity and it should be zoned accordingly,” said Bruce Vaughn, Stable Isotope Lab Manager at INSTAAR. “And setbacks, to me, are part of that discussion … It’s jobs or health, you can’t have both, and I take issue with that, you can [have both], and I don’t think it’s going to be the end of the oil industry.”

Vaughn acknowledges that the compromise might mean that gasoline prices become more expensive.

“I’m okay with that, I think if gas was four bucks a gallon, [which is] easy for me to say because I have a job, but I’m okay paying that if that’s the cost of doing business,” Vaughn said. “Far too many things I think we’ve enjoyed as a species, as western culture, have not come with full price of the long-term cost.”