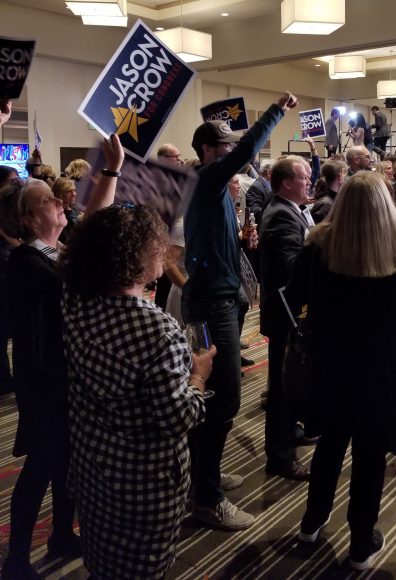 After one of the nation’s most closely watched and expensive midterm battles, first-time candidate Jason Crow won the race for Colorado’s 6th Congressional District, defeating incumbent U.S. Rep. Mike Coffman. The district, which wraps around the east side of Denver includes all of Aurora, as well as parts of Centennial, Brighton, Henderson and other cities.

Early polling in September and October showed Crow, a Democrat, with a modest lead over Coffman going into the election. As of 8:30 p.m. on Tuesday, Crow had 52 percent of the vote to Coffman’s 48 percent. He delivered his victory speech at a watch party in Greenwood Village, just an hour and a half after the polls closed, calling for unity in a room packed with cheering supporters.

“For me, this campaign reaffirmed the Colorado spirit, that we are in this together and that we share a common destiny,” Crow said. “Tonight, I’m asking you to tune out the voices of hatred and division. Wherever we’re going, we don’t need them.”

The ripple effect of Crow’s win extends far beyond the Colorado suburbs. With all 435 spots in the U.S. House of Representatives up for the taking, Democrats needed to flip just 23 previously-Republican seats Tuesday to win a majority. By midnight, they had gained control of the House for the first time in eight years.

The Democratic Congressional Campaign Committee hand-picked Crow — a lawyer and combat veteran who had never run for office — to challenge an experienced Republican who had never lost a race. Crow is one of 17 military veterans drafted by the DCCC in an effort to make the House blue.

Democrats have had their eye on the increasingly diverse 6th Congressional District for years. Although Coffman won his last two elections by a margin of more than eight points, the 6th District overwhelmingly voted for Hillary Clinton in the 2016 election.

The district has only continued to lean more progressive and more anti-Trump. Coffman worked hard to appeal to his constituents, many of whom are immigrants. In addition to becoming fluent in Spanish, he actively supported DACA and called for “sensible” immigration laws.

Coffman had also publicly said he is not a Trump fan, voting no on the repeal of the Affordable Care Act despite multiple calls from the president. However, during the campaign, Crow pointed towards Coffman’s tendency to vote in line with the president, as well as to donations Coffman received from the NRA.

Coffman has received $33,700 from the NRA since 2010, which is more than any other member of Colorado’s congressional delegation. That number, coupled with Coffman’s “A” rating from the NRA, drew widespread criticism. The 6th District includes the city of Aurora, where a gunman opened fire in a movie theatre in 2012, killing 12 people.

Crow’s anti-Trump and gun control sentiments hit home with voters, including unaffiliated voters, who turned out for this election in unprecedented numbers.

Jeff DeLazaro of Highlands Ranch identified as a Republican until the 2016 election. Now unaffiliated and vocally anti-Trump, DeLazaro described himself as a “compassionate conservative.” He said his district is long overdue for a change.

“Coffman was somewhat of a puppet for Trump and the gun lobby,” DeLazaro said. “It’s time for a counterbalance.”

Pam DeLazaro, also unaffiliated, learned about Crow through Moms Demand Action. She began volunteering for his campaign early on and said she was “absolutely thrilled” Crow ousted Coffman.

“I want more people to stand up to Trump,” Pam DeLazaro said. “I think Jason is a decent, honest guy who cares about people. He’s genuine.”

Despite their frequently contentious campaign and many differences, Crow made clear in his victory speech that he does not view Coffman and his supporters as enemies.

“This is politics, not war,” Crow said. “I will never stop trying to find common ground where I can.”

With the national Congress now split between a Democrat-controlled House and a Republican-controlled Senate, Crow likely has his work cut out for him. He joins 25 other new congressional representatives at a time when many fear the country, and the government, is more divided than ever.

“It’s time to practice politics with honor, dignity and humility, and build a government that fights for those who need a fighter,” Crow said. “And most of all, it’s time to get to work.”

Proposition 112 fails to pass, considered a success to...