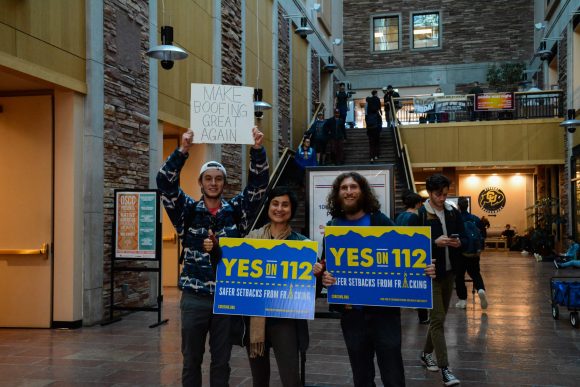 Half an hour before the polls closed, CU students lined the atrium of the University Memorial Center, encouraging their fellow Buffs to vote. Many turned out to show their support for Proposition 112, the unsuccessful ballot initiative that would have further regulated oil and gas development.

A smaller group, CU’s College Republicans, gathered outside the UMC’s polling station after voting to show their support for Republican candidates and their opposition to Prop. 112.

Members of the organization were upbeat shortly before the polls closed. The president of College Republicans expressed optimism about gubernatorial candidate Walker Stapleton and congressional candidate Peter Yu.

After the polls closed, the students headed to The Sink, where they watched election coverage on CNN. The group was excited about the chances of Proposition 109, which would’ve created bonds to pay for specific transportation improvements without increasing taxes or fees. This proposition did not pass. Proposition 110, which would have created bonds towards more flexible transportation funding with an increase to the state sales tax, was opposed by the group. They were shocked when Colorado’s voters rejected both propositions.

Afterward, the students returned to the UMC to view coverage on Fox 31 and NBC. While College Republicans were disappointed by the outcome of the Governor’s race, its president expressed hope that Polis would work on behalf of all Coloradans.

“I hope that he will be a representative that incorporates everyone’s viewpoints, and that he will work with Republicans as well as Democrats,” he said. “The best thing we can do is work with him and ensure that our voices are heard.”

Faryn Kravitz, a freshman, was particularly concerned with Amendment A, which would amend the state’s constitution by removing the use of slavery and forced servitude as punishment for a crime.

“Seeing the word slavery on the ballot was really off-putting,” Kravitz said. “I hope people were educated on this going into the elections.”

Kravitz says she thought back to the women who fought for the right to vote, who ultimately encouraged her to cast her vote.

Other ballot measures were discussed, including the Boulder sugar tax ballot 2D.

“I saw the sugar tax on soda and I thought that was breaching our personal right,” Fiona Reynolds, a sophomore, said. “If you want to drink soda I think you definitely should be able to without a penalty.”

At another viewing party held in Ketchum, viewers celebrated the projected win of gubernatorial candidate Jared Polis. Despite the win, many felt less confident in the Democratic party’s chances of taking control of the House of Representatives.

“I’m a little more cautious in my optimism for the democratic party,” Matt Peterson said. “I was expecting it to be a little more of a strong wave…I wasn’t expecting the Senate to go blue, I’m still fairly happy with the way it’s turning out.”

Change was a major driver for students present at the viewing, with many highlighting the importance of social issues. Michael Robinson, a junior, believes Democrats align with his views when it comes to change.

“I think we’re really going through a social crisis,” Robinson said. “[Democrats] are just based on addressing that and I think that’s what the US really needs to focus on, just the social issues and cultural issues that are going on.”

CU Student Government Representative at Large Emma Perkins-Johnson is unsure how the night will go for Democrats, but she hopes change can still come for the nation.

Despite lower optimism for Democrat success, many feel pleased with voter turnout among the CU community.

“I think it’s amazing!” Perkins said. “Every time I passed by the poll room and even the tent outside, it was packed and I’m just so happy.”

“Turnout was hugely successful,” Robinson said. “Especially because [CU] used something that addresses our age group which was social media and every single day there were people telling others to vote.” 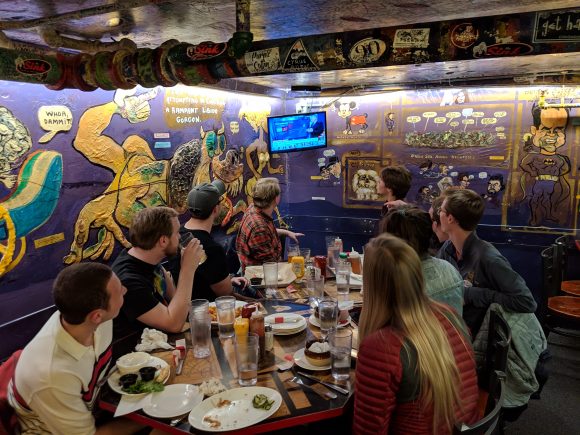