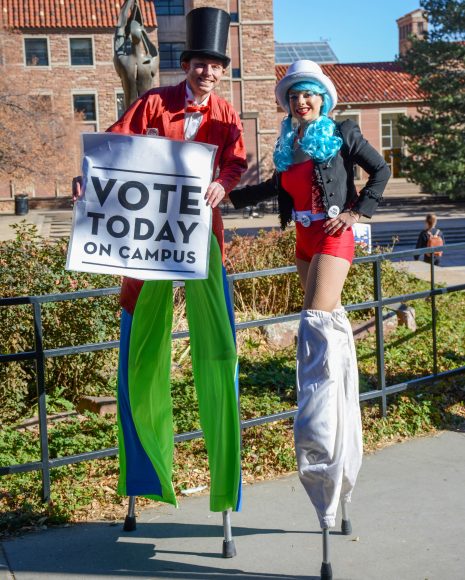 Students rushing to vote at the University Memorial Center poll station in the final hours before polls closed at 7 p.m. stopped to discuss their thoughts as student voters.

Acayla Rashing, a recent graduate now working at the campus Museum of Natural History, was kicked out of a meeting by her boss on the insistence that she go vote immediately.

“I’m honestly just happy that I had that little kick in the butt to get out the door and vote, even though it was last-minute,” Rashing said. Rashing was the third-to-last person in line to vote. Students were prohibited from joining the line after 7 p.m. and doors to the polling station closed four minutes after the hour.

First-time voter Brandon Chavez-Morquecho wanted to participate before Trump was elected but was too young to vote in the 2016 presidential election. He attended the Bernie Sanders rally held on campus two weeks ago and favors redistributive taxes.

“Now that I’m eligible to vote, I’m going to use that vote regardless if I’m just one person in millions and thousands of people … to actually make change,” Chavez-Morquecho said.

Freshman Diego Velazquez similarly felt that the presidential election prompted a surge of young voters to realize the importance of their vote.

“It’s not just something we can just skip out on, because a lot of people were disappointed with those results,” Velazquez said. “It doesn’t make a lot of logical sense to leave it up to those who have different values than we do and grew up in a different time, because a lot has changed in the last decade.”

Some students commented on the need to participate in the democratic process to be justified in spreading negativity about any potential outcome.

“If people don’t vote, they don’t get the right to complain,” sophomore Belinda Polynice said. Similar ideas were shared by Ben Beavers, who feels that history is made by those who get involved and that people who don’t show up have no right to complain.

Recently naturalized citizen and CU senior Akash Gaonkar expressed faith in the political system above all.

“I trust voting as a system,” Gaonkar said. “Even if the person I didn’t vote for gets elected, it’ll be okay.”

After leaving the poll station, students generally felt pleased with the opportunity to contribute, with several students voicing that they felt happy and proud to participate.