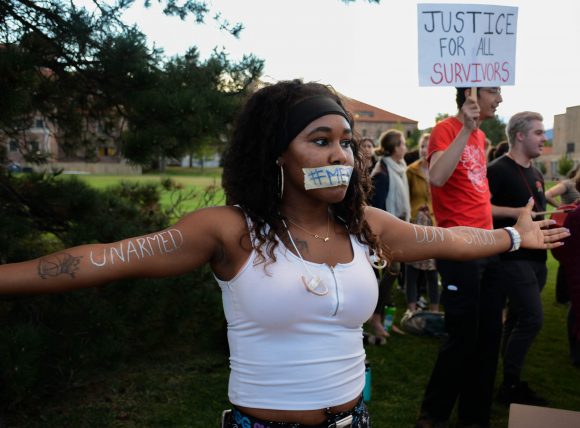 Turning Point USA is a national nonprofit organization. The evening’s event featured Charlie Kirk, the founder and executive director of the organization, and Candace Owens, the director of communications.

Protesters gathered across the street from the CU Events Center for a protest and toiletry drive coined “Toilet Paper USA: Toiletry Drive for the Houseless.”

The protest, sponsored by the CU chapter of Young Democratic Socialists of America, encouraged toiletry donations for Boulder’s homeless community. Other organizations such as The Collective, Socialist Revolution and the International Socialist Organization joined the democratic socialist group.

Many protesters expressed their desire to directly serve the local community in their activism.

“With the toiletry drive, we’re also showing that we’re out here not just to scream and yell, but to also do good and donate stuff for the homeless community,” said Lindsay Malfer, a freshman studying international affairs and journalism. 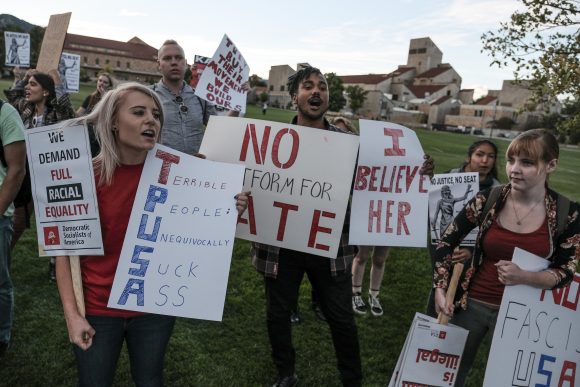 “Right-wing people don’t give a crap about the homeless community in our area,” Malfer said.

Kyle Wager of Young Democratic Socialists of America said that the drive’s goal was to protest “the reactionary far right group that’s pro-capitalist, pro-imperialism … pretty much all the worst things you can be ‘pro.’”

Along with accepting donations of toiletries, protesters sang a series of chants.

“Say it once, say it again! No excuse for violent men!” they shouted.

“Get up, get down, there’s a women’s movement in this town!” they continued.

Protester Zoe Royer said that the demonstration was, in part, “against the Kavanaugh nomination.”

“We believe survivors and we believe the way that Dr. Ford and Anita Hill have been treated is deeply evident of how the women in this country are being treated,” Royer said. 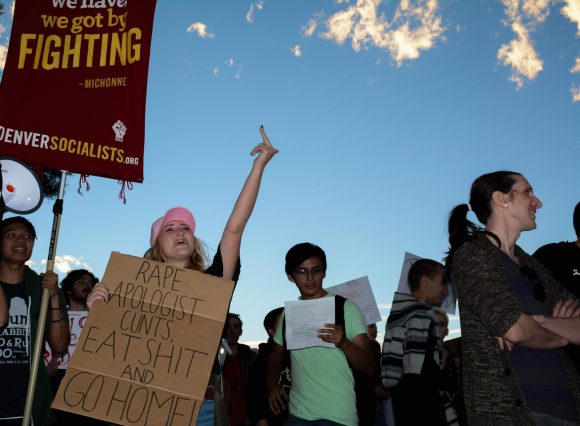 Student Sage Yeager-Wheaton shares her sign and her emotions during the Wednesday night protest against Charlie Kirk, the founder of Turning Point USA, who was speaking on the CU campus. Oct. 3, 2018. (Robin Fox/ CU Independent)

Richard Folsom of the International Socialist Organization saw the protest as a necessity.

“It’s not like we want to be here,” Folsom said. “We’d rather be out smoking pot and eating food.” 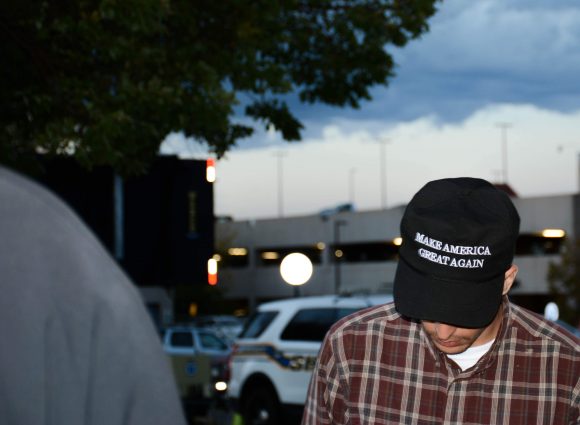 A counter-protester in a Make America Great Again hat bows his head as a protester confronts him about Christine Blasey Ford. Oct. 3, 2018. (Robin Fox/CU Independent)

Folsom added that Kavanaugh supporters are a minority at the university.

“It just motivates us to keep spreading our messages and what we believe,” Blair said. “We’re looking for civil discourse, and all of these people were invited to get tickets and to come discuss those ideas inside with us, but if they would rather stand across the street and yell at us all night, that’s their prerogative.”

An unidentified man wearing a white MAGA hat attempted to debate the protesters who crowded him out of the area. As he left, he held up an American flag and shouted, “God Bless America!” 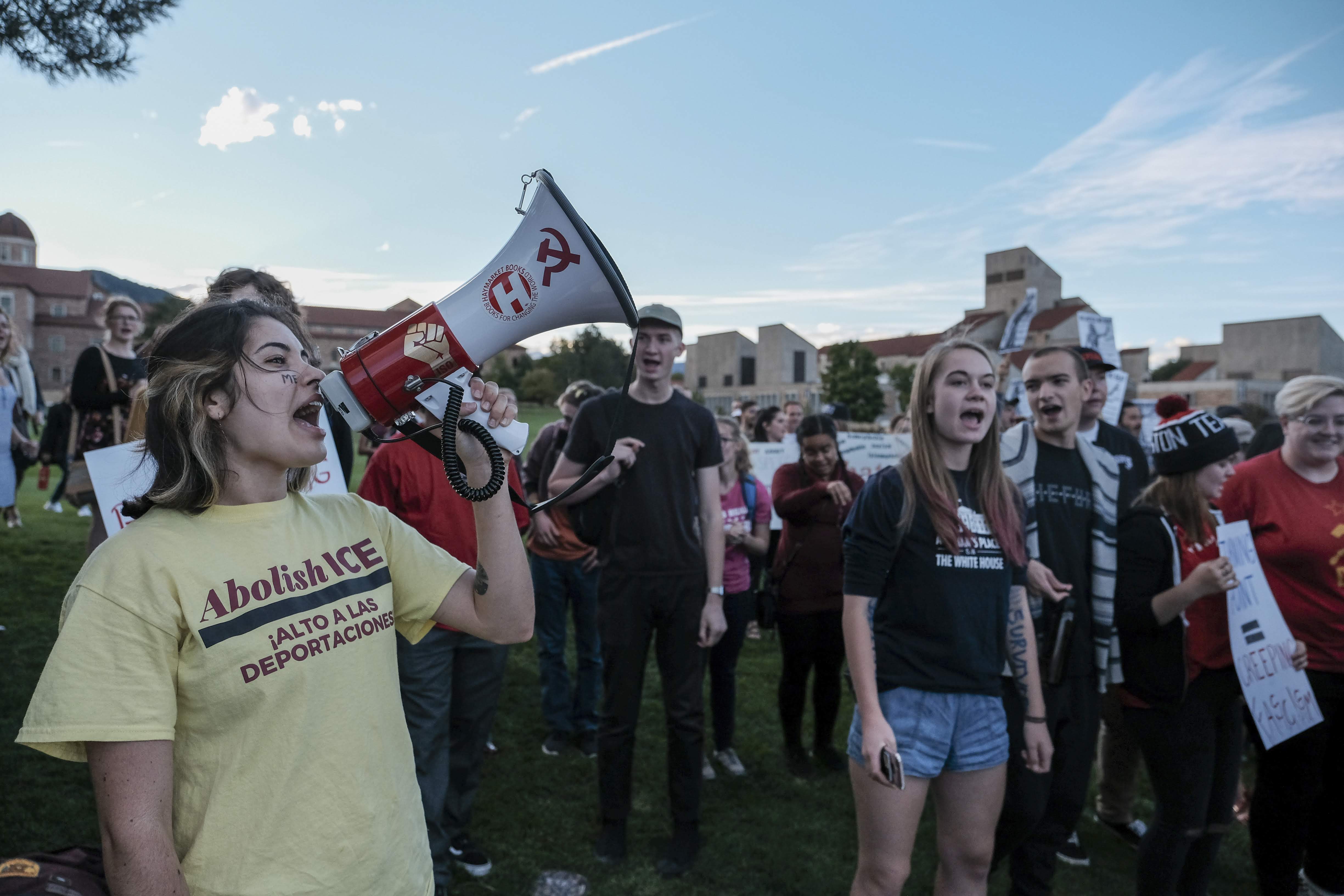 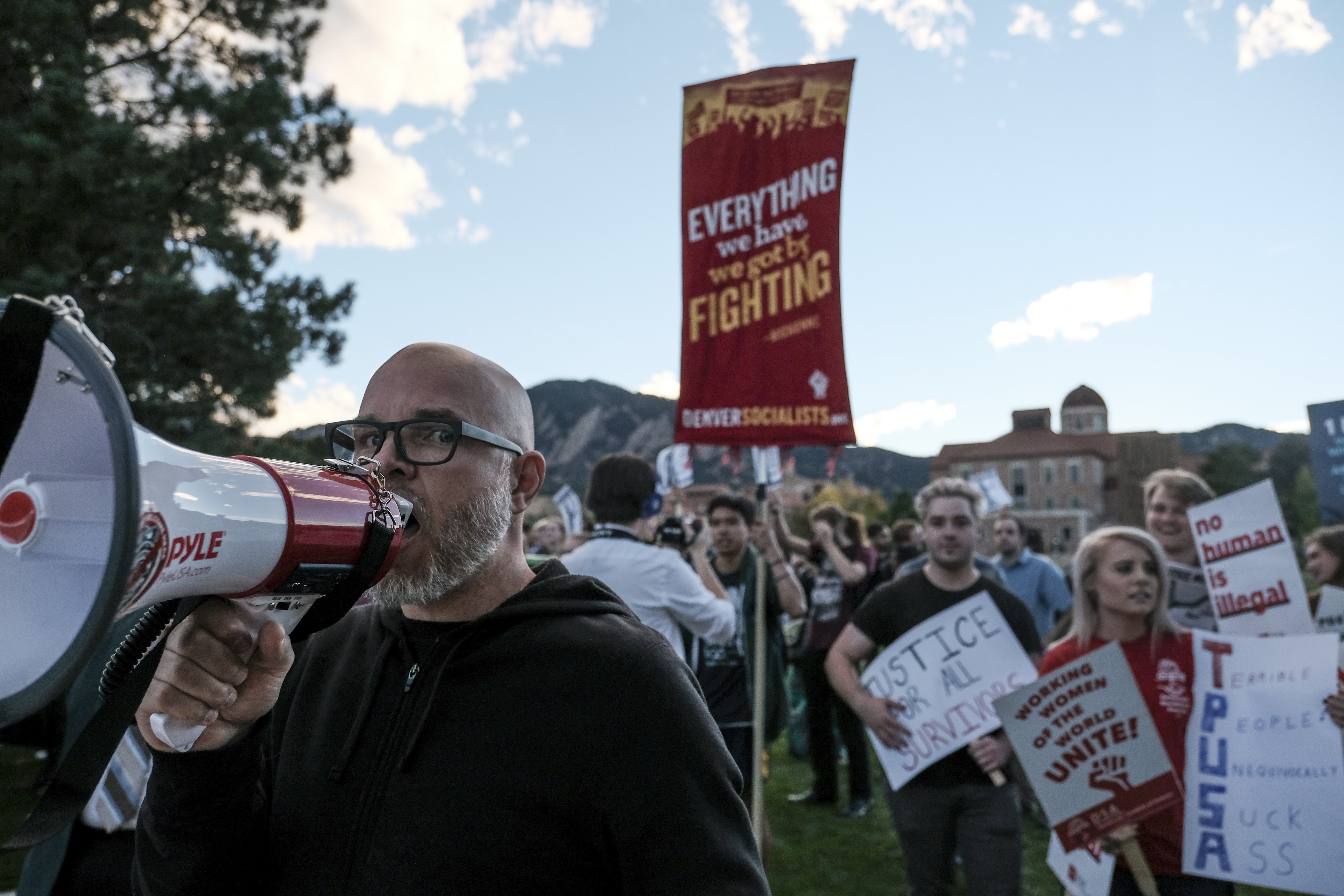 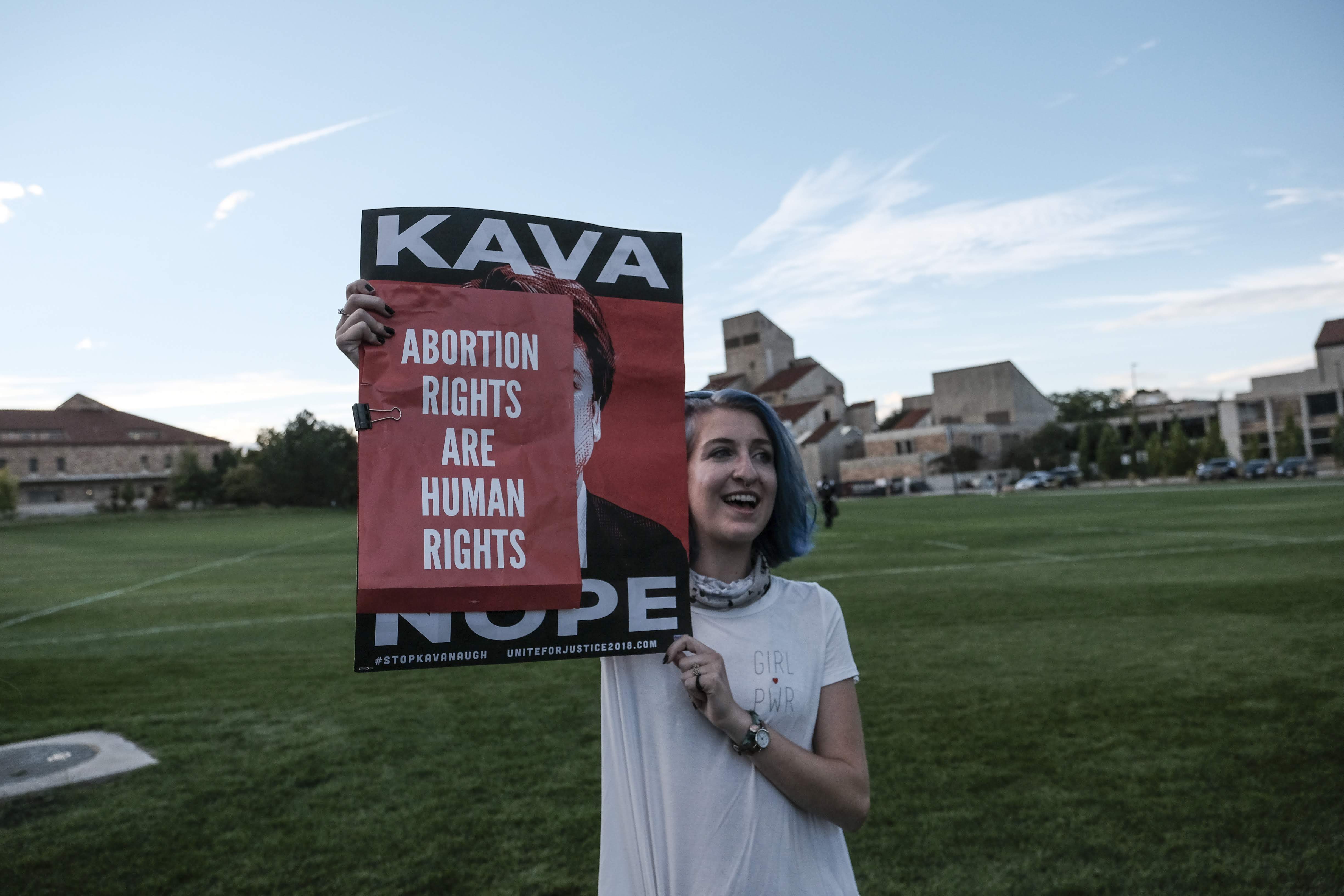 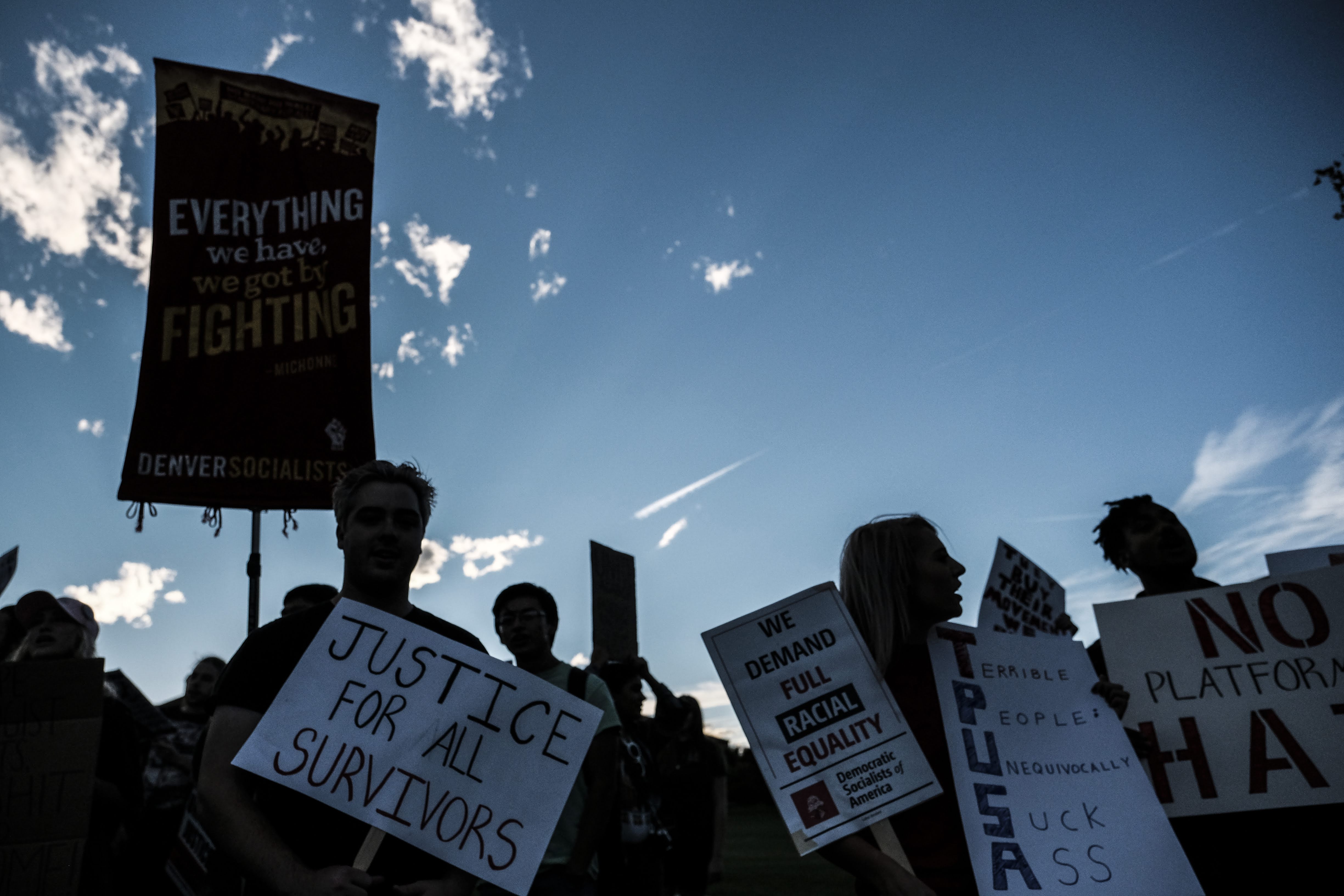 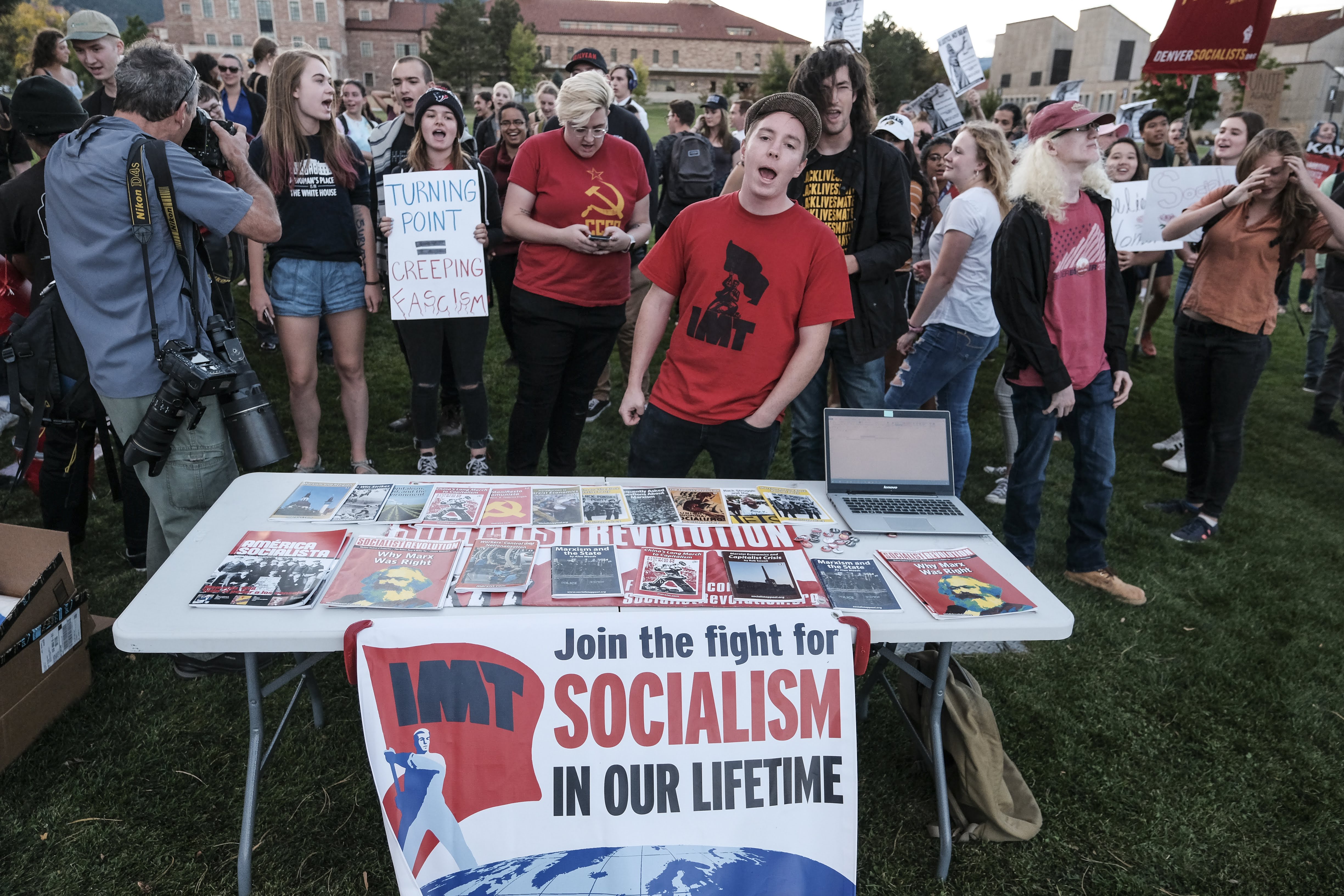 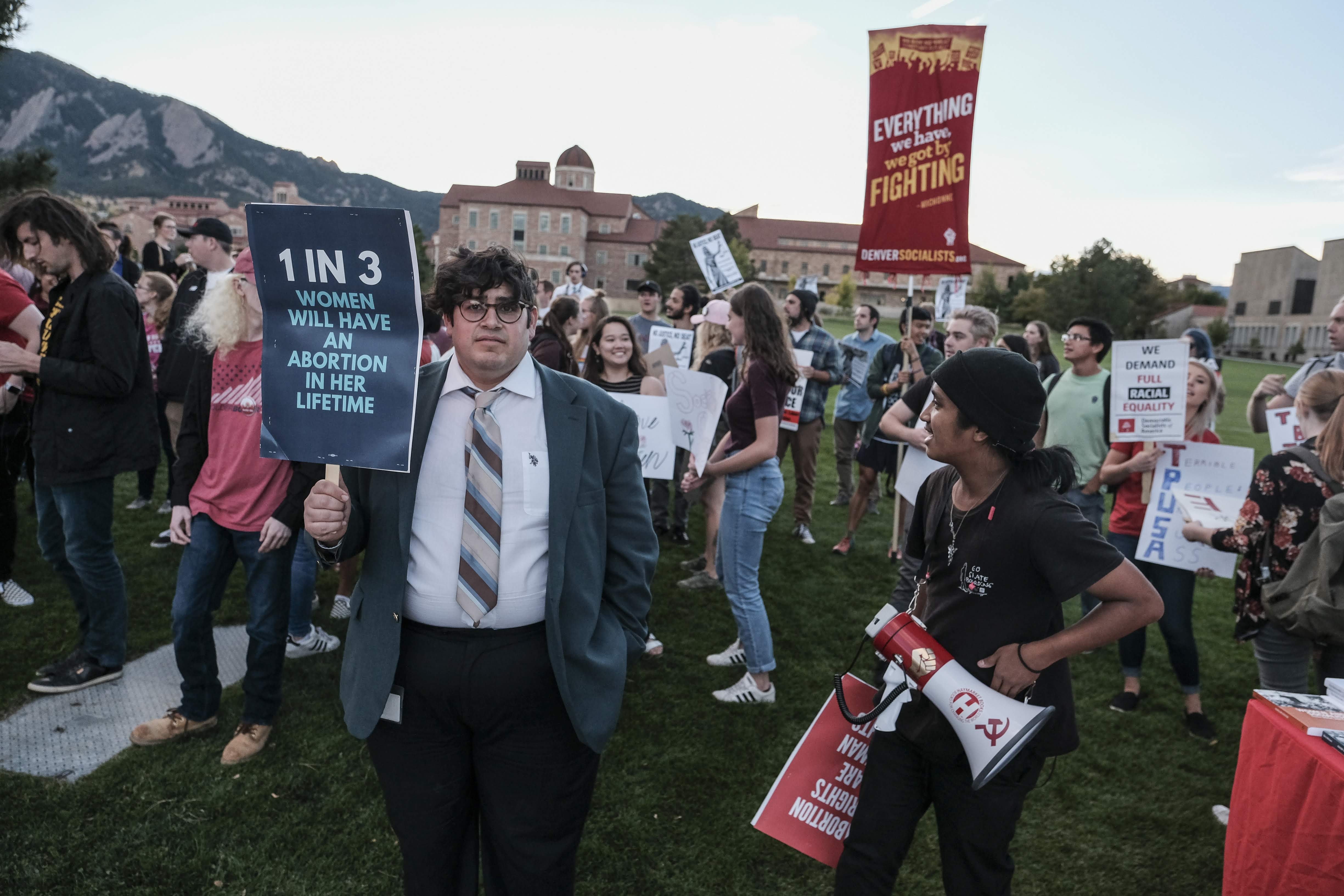 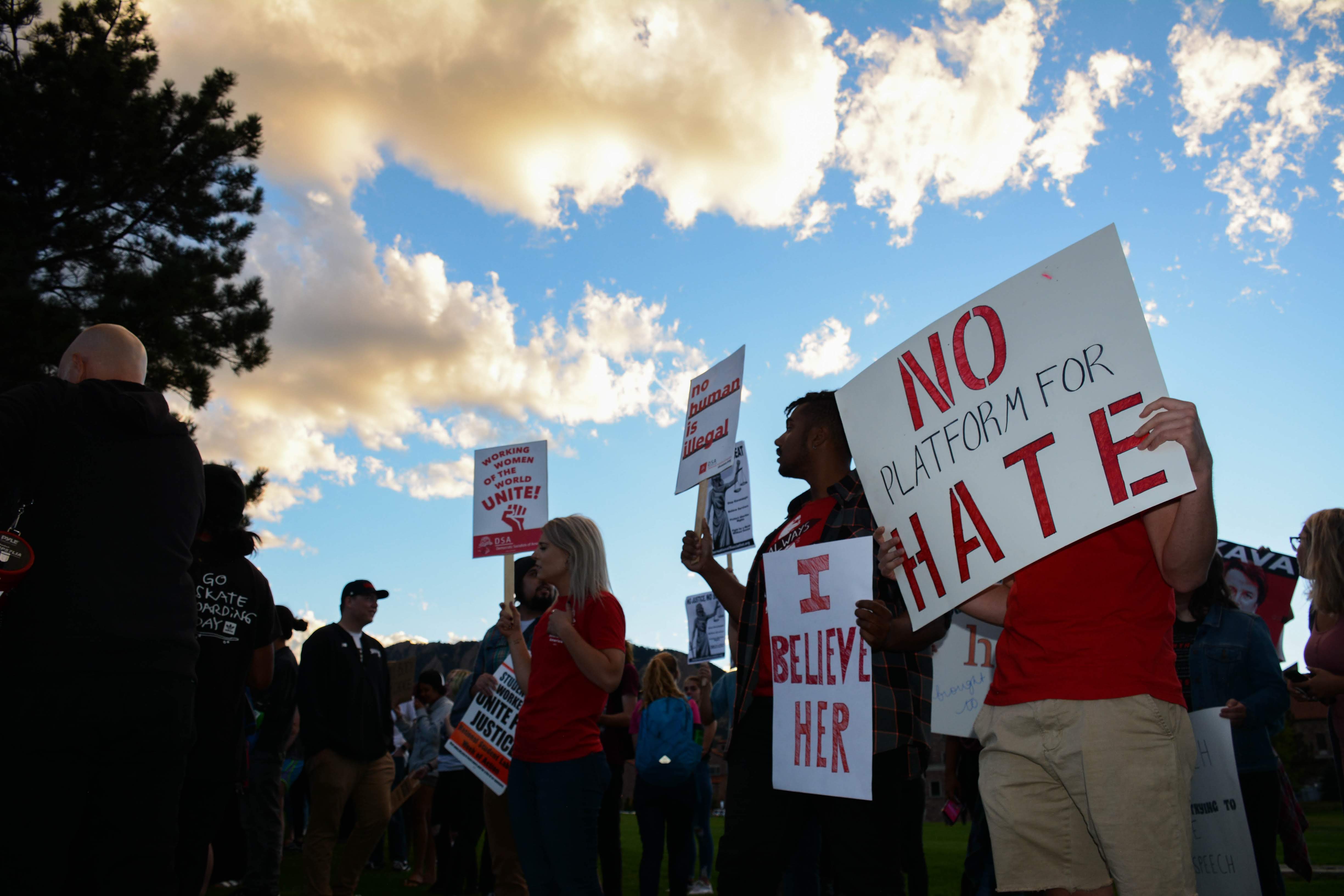 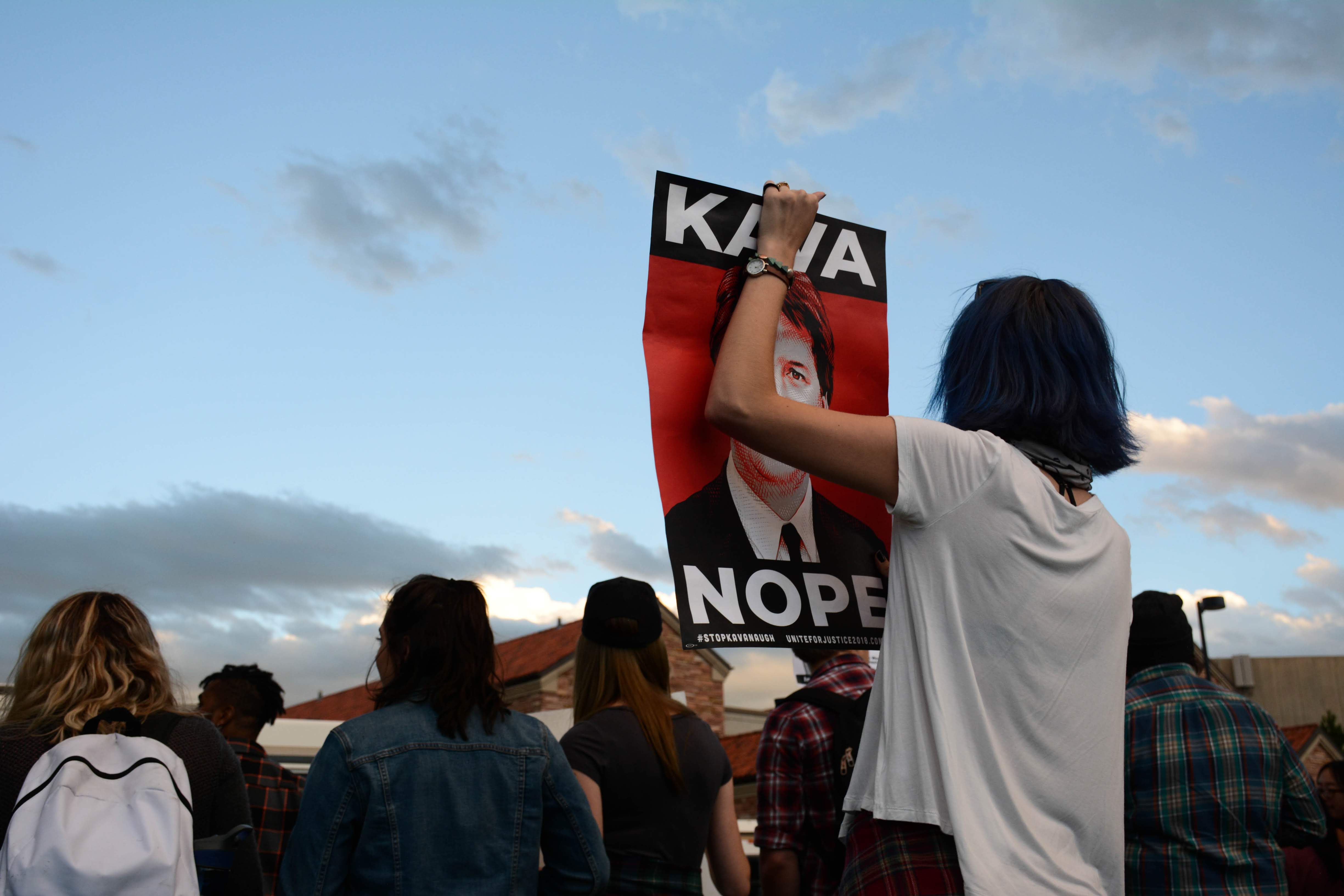 A young woman holds up a Kava-nope sign in protest Wednesday night on the CU campus. The protests were against Charlie Kirk, founder of Turning Point USA, who was speaking on campus. Oct. 3, 2018. (Robin Fox/ CU Independent) 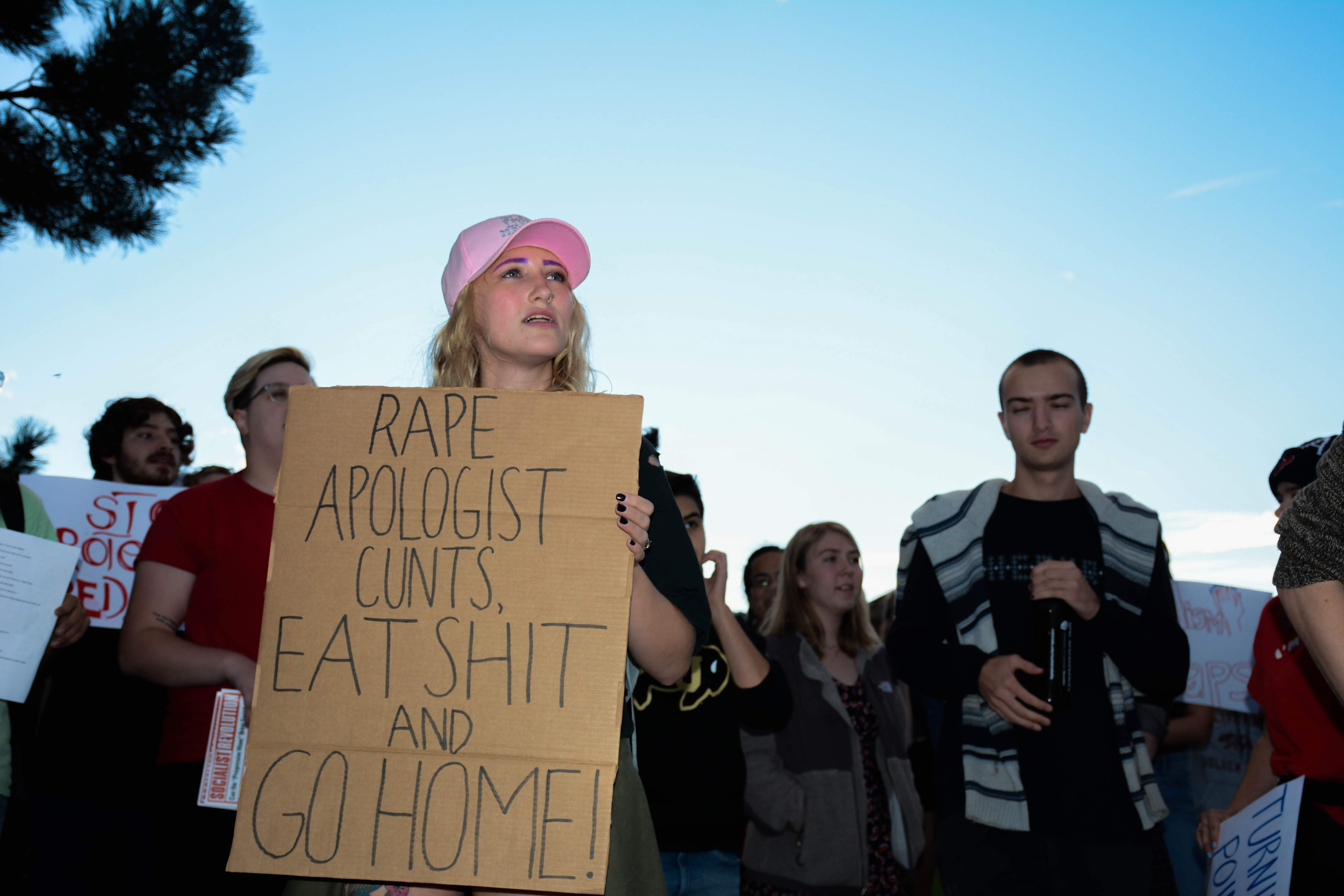