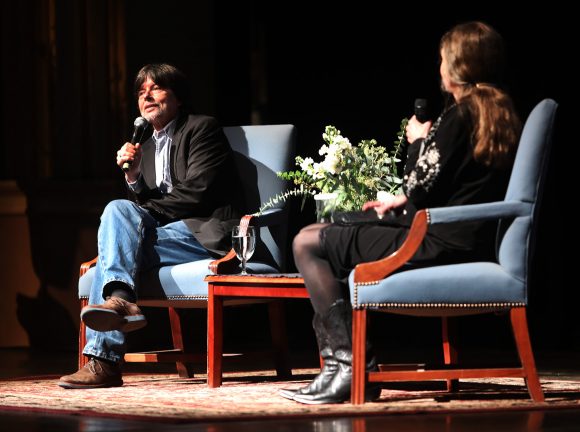 Award-winning filmmaker Ken Burns was presented with the Wallace Stegner Award by University of Colorado Boulder’s Center for the American West at Macky Auditorium Tuesday night.

Burns is a documentary filmmaker who has created numerous films about American historical topics, ranging from jazz and baseball to the Vietnam War. He has received many accolades for his work, including 15 Emmy Awards, two Grammy Awards and two Oscar nominations. The award, named after American author and historian Wallace Stegner, is “presented to those who have faithfully and evocatively depicted the spirit of the American West,” according to the Center for the American West’s official website.

As part of the event, Burns had a discussion with Patty Limerick, highly acclaimed historian and co-founder of the Center for the American West.

During their discussion, the two spoke briefly of Burns’ childhood and the passing of his mother when he was 11 years old.

“If you could have had a more comfortable and unemotionally strenuous childhood, millions of people would have lost something of great value to them,” Limerick said.

Burns recalled once being asked by an interviewer what the greatest gift his mother ever gave him was. Burns responded “dying.”

“Everything that I am has come from that tragedy,” Burns said. “We are all more often that not defined by these things that happen.”

Growing up, Burns always wanted to be a filmmaker. The catalyst for this was the first time he saw his father cry while they were watching a film six months after the death of his mother.

“Life had not permitted him a place where he could be comfortable expressing these emotions,” Burns said of his father. “Tolstoy once said that art is the transfer of emotion from one person to the other.” 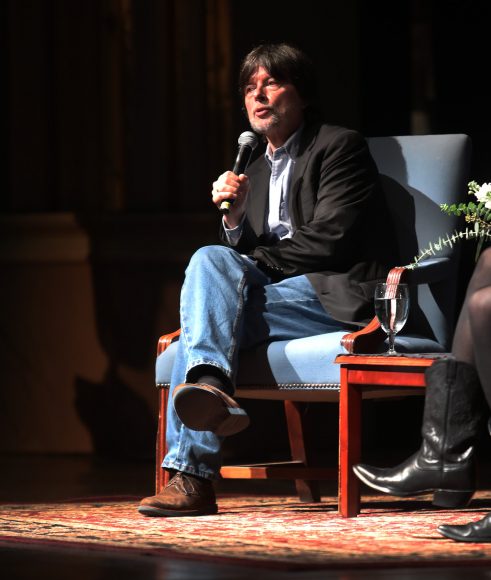 But Burns was not determined to make documentary films until college. He recalled meeting social documentary still photographers, who reminded him that “there is as much drama in what is and what was as anything the human imagination comes up with.”

Burns and Limerick also discussed the criticism that Burns has received for his films leaving certain details of history out.

“I know what I’ve left out,” Burns said confidently. “What storytelling is, is the editing of human experience.”

Burns also responded to critics claiming that he has over-sentimentalized history in his films.

“I understand that emotions are frightening and that it’s much easier to say, ‘sentimentality and nostalgia are the enemies of good anything.’ And I’m not interested in that,” Burns said. “All of my films are about love.”

The night ended with the audience singing in unison to the song “Hard Times Come Again No More” by Stephen Foster, a song that is often used in Burns’ films. The William Stegner Award was then presented to Burns.

“Denied of refuge from human mortality and frailty, you figured out how to turn sorrow into an invitation to the past, present and future,” Limerick read. “For four decades, you have lent your extraordinary vitality to the enterprise of bringing your contemporaries into the company of our predecessors.”

“Thanks to you, death has had to settle for a diminished dominion in our minds and souls,” Limerick concluded.