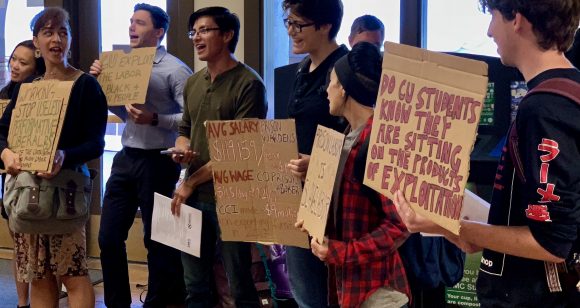 Students from various campus groups came together to protest CU Boulder’s use of prison labor during the Student Leaders Reception at around 5:00 p.m., Tuesday. The University gets furniture such as desks from Colorado Correctional Industries. A prison policy report from 2017 shows inmates are paid as low as 84 cents per day.

The coalition of groups dubbed Organization Between Student Orgs, stood outside the Glenn Miller ballroom as members of the chancellor’s office, the Division of Student Affairs and the Center for Student Involvement gathered inside. Student groups involved included the Black Student Alliance, Young Democratic Socialists of America and the grad student union.

Chants such as “Corporate greed we must fight, slavery is not all right” and “Be bolder CU with your labor policies too!” could be heard from down the hall.

Frankie Donez, a junior and member of the coalition, stated he was there to speak out against CU’s use of prison labor. He stated the group targeted the reception specifically in order to bring the issue to the attention of leaders.

“We’re targeting the people who want to put on a good face,” Donez said.

Gwendalynn Roebke, the coalitions initial organizer and president of the Black Student Alliance, said they were not going to be bullied by administrators. Roebke hopes the protest will mobilize CU leaders to take more action on the issue in the future.

“Our goal is to let them know we’re not here quietly,” Roebke said.

Kyle Wager, a junior, wanted to be present to hold CU accountable for their use of prison labor.

The group of students soon entered the reception event to directly engage with CU administrators and faculty.

Samantha Truong, a first year student and member of the Multi-cultural Leadership Scholars Program, said the reception was “very posh”.

Truong was critical of the nature of the reception, believing members to be under pressure to not engage with students on the issue of prison labor. Truong saw the event as nothing more than faculty and administrators engaging in small talk.

“I just feel like we aren’t even talking about issues that are important,” Truong said.

Truong also felt it hard to talk to faculty saying she received a lot of “dirty looks and hesitancy.”