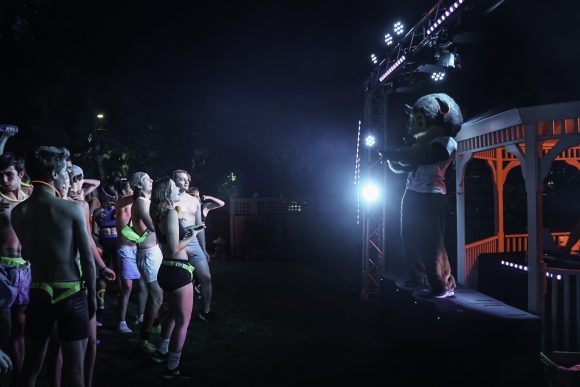 A CU tradition since 2005, the Nearly Naked Mile is the Herd’s annual clothing drive. Hundreds of students strip down, donate clothes and run through campus. In the past, the drive has just benefited A Precious Child, a local nonprofit working to improve the lives of disadvantaged and displaced children. This year, the event included the Denver Rescue Mission, a Denver-based nonprofit for people experiencing poverty or homelessness. 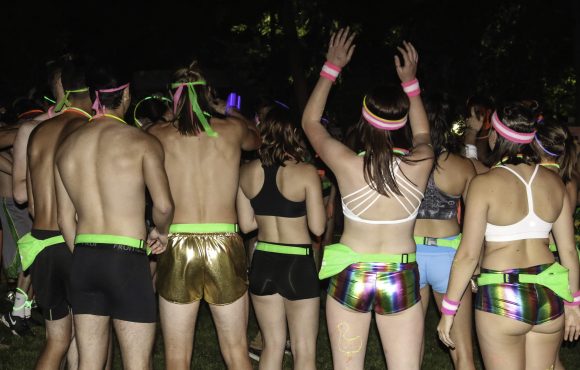 The Herd’s Program Manager Sara Abdulla explained that the association wanted to give people the opportunity to choose which nonprofit to support.

“It’s more for students to decide where they donate versus being told where they donate,” Abdulla said. “And we’re hoping as the years go by we can incorporate more regional nonprofits into the mix.”

Over 300 students preregistered for the event and many more joined throughout the night. The event itself was a neon-filled dance party with a DJ, food, games and prizes. In the back, 55-gallon barrels filled to the brim with donated clothing were placed inside a tent.

Michael Cohagan, one of the approximately 40 student volunteers, loved the entire atmosphere of the event.

“Everyone really enjoys the event, and it’s only a mile, so no one gets too intimidated,” Cohagan said.

The event was filled with students and alumni alike with many wearing bright, neon underwear and as many glow sticks as possible. Many alumni who came back for the event couldn’t miss out on the fun. Robert Tyrrell-Ead graduated this past spring and was excited to return for the Nearly Naked Mile.

“When else do you get a chance to run through CU Boulder campus nearly naked with a whole bunch of other people legally?” Tyrrell-Ead said. 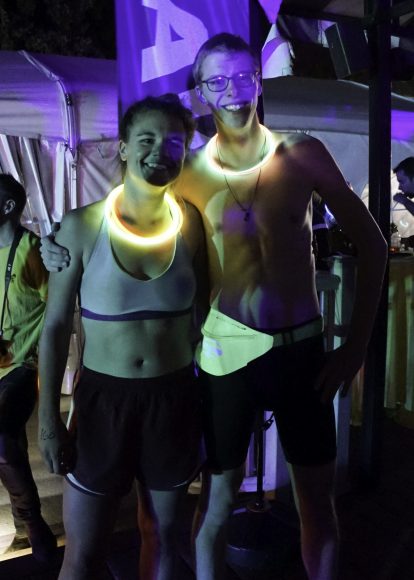 Emma and Robert, long time participants in the Nearly Naked Mile, were excited to get the race started. Sept. 21, 2018. (Fiona Matson/CU Independent)

The race itself began around 9 p.m., with organizers rallying the runners together by singing the CU Fight Song as they crowded behind the start banner. Finally, everyone counted down and the race began.

Only a few minutes later, freshman Zach Klaus, the first male winner and winner overall, made his way through the finish line.

“It hurts a lot more than I remember,” Klaus said with a laugh in between breaths. “That was a lot of fun.” 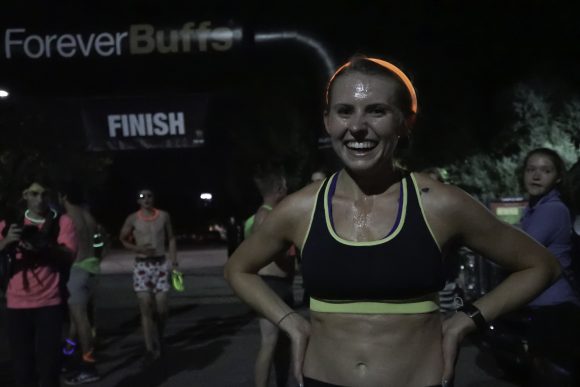 The top three winners in both the men’s and women’s category had their choice of CU Nike gear. Sept. 21, 2018. (Fiona Matson/CU Independent)

Senior Mackennea Broyles was the first female winner, and this was her first Nearly Naked Mile. As an education major, she appreciated the opportunity to donate clothing to disadvantaged children.

“A lot of times in practicum, we see kids where it gets to winter and they don’t have a coat and don’t have things to go outside in, so it’s really great to see a drive for things like that,” Broyles said.

The final donation amount will be announced Monday. 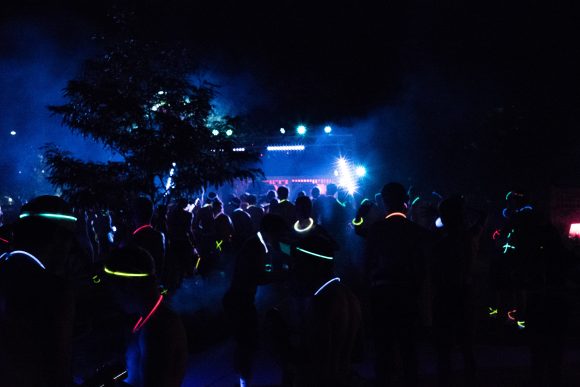 Runners cover themselves with glow sticks before the start of the Nearly Naked Mile. Sept. 21, 2018. (Lukas Crosby/CU Independent)

Bri Barnum is a copy editor at the CU Independent. Originally from Minneapolis, she is a Senior majoring in journalism and Russian studies. When not editing articles, you can find her traveling, taking pictures and watching an obscene amount of documentaries.