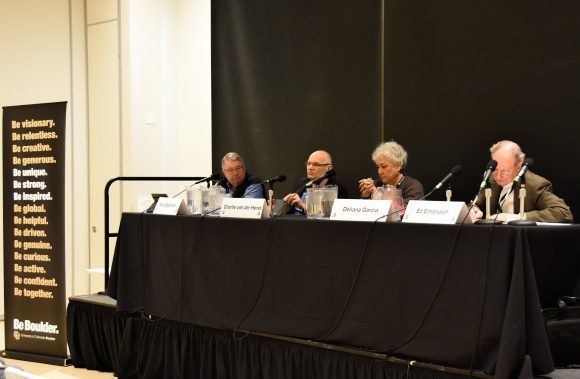 Panelists ponder a question pertaining to the effects of reduced funding in women’s global health from the U.S. April 10, 2018. (Fiona Matson/CU Independent)

Systematic overturn of the inequities in healthcare was a big topic for the 70th annual Conference on World Affairs on campus this week. Panelists including family doctors, policy reformers, former professional athletes and journalists discussed the need for reform in improving access to healthcare and good nutrition.

The week-long Conference on World Affairs takes place at CU Boulder each spring, bringing speakers from across the U.S. and the world.

The panel, which focused on the future of food, continued without Kim Severson a food correspondent for the New York Times who had a meniscus injury and concluded that education on consumption is integral to future healthy choices.

“I want to bring real food to real people in all communities,” said Katherine DiMatteo, executive director of the Sustainable Food Trade Association. “I would love to see a revolution in our food system, changing our [economic] structure but maybe that’s too big.”

DiMatteo’s conclusions were expanded upon in discussions over the legalities of GMO seed patenting and governmental subsidies for grain products. These acts, along with labeling fruits and vegetables as specialty food, allow for inequity in food access, according to members of the panel.

While many companies have tried to correct growing food deserts — areas where it is difficult to find affordable fresh food — in the U.S., there are still groups not being reached. Ann Cooper, director of food services for Boulder Valley School District, hopes to expand school food programs.

“It’s the fastest [way] and a good way to help food insecurity,” said Cooper on the expansion of school food programs like the backpack program. The program provides a bag of non-perishable food items for children to eat after school when meal programs are unavailable.

Another health panel was devoted to the topic of whether healthcare should be a universal right. Panelists concluded that while not a right in the eyes of U.S. law, the current healthcare system necessitates an overhaul, with unequal access being the biggest problem. This discussion was attended by many Boulder retirees, most of whom were concerned about the future of their government-funded healthcare.

Hadley Manning, director of health policy for Forbes, suggested a new process of individuals buying insurance themselves instead of through employers. This, Manning believes, “will give the population better pricing options.”

While pricing may play a large role in access to health care, individuals on the panel like Deliana Garcia, director of international projects for Migrant Clinicians Network, and Jameson Green, a transgender activist, believe current education procedures and systematic discrimination are blocking access for minority populations.

Garcia continued this idea of discrimination in healthcare access at a panel focused on global health inequity. She shared her experiences in Puerto Rico, a US territory going into their sixth month of not having complete power, which she attributed to systematic decisions of who gets and who does not get access.

“It’s not that the poor want us to be poor with them, they just want us to get out of their way,” said Garcia, quoting her friend and President of the World Bank, Jim Kim.

Fellow panelist Charlie van der Horst agreed with this sentiment, adding that studies in Malawi show the only difference between high functioning and low functioning prenatal care is if the expectant mothers has access to paved roads. Poorer individuals could not access doctors in their rainy season without paved roads.

Topics surrounding U.S. healthcare and global health both emphasized the need for individuals to help bridge gaps in access.

“If you can get Coca-Cola to every end of the earth, you can get vaccines and maybe even anti-smoking initiatives,” said Garcia.

CWA panelists also addressed the topic of marijuana and the undefined side effects to consuming THC. While Colorado has legalized marijuana, it is still considered a class one drug. This prevents any type of medical research on the drug.

Many of the panelists had personal connections to finding ways that marijuana can help keep others off opioids and hard drugs. Fred Haberman, an investor in medical marijuana, described the story of Amelia, a young child diagnosed with a rare case of epilepsy. Instead of taking 20 types of medication to control it, she now takes marijuana products and can sleep through the night.

Haberman used this anecdote to pose a question to the room. While past presidents and most recently Trump have criminalized marijuana, people like Amelia have improved their lives because of it.

Chris Bordlan, a former NFL player, advocated for medical acceptance and use of marijuana products for those with head trauma.

“[There are] so many less side effects to non-psychoactive weed for others who otherwise would have been over prescribed opioids from team doctors,” said Bordlan.

While no panelists predicted national legalization within the current administration, there are hopes for a re-categorization state by state until it is the majority, a process similar to the transition to legalizing same-sex marriages.

In all, health panelists agreed that the current U.S. healthcare system needs an overhaul. Panelists from each session believed the way for progress is for individuals to inform themselves and their governmental representatives about these issues.

CWA panel on “Leadership and Ethics” discusses values and...

Conference on World Affairs will move online, focus on...