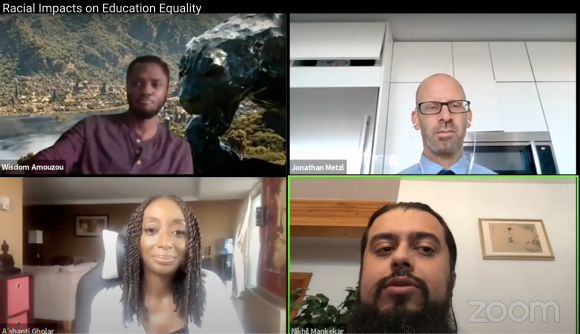 The University of Colorado, Boulder concluded its virtual Conference on World Affairs Friday, with a discussion on the racial impacts of educational equality. Nikhil Mankekar, CU graduate and two-time chair of the City of Boulder Human Relations Commission, moderated a conversation with A’shanti Gholar, Wisdom Amouzou and Jonathan Metzl.

“We know that stark racial disparities exist at every stage of our education system and these disparities compound and contribute to inequalities in equity in economic, health, housing and criminal justice outcomes,” Gholar said. “The COVID pandemic has finally shed a light on them in a way that most Americans had never seen before.”

The coronavirus pandemic has hit Black and Brown—as well as socially economically disadvantaged communities—especially hard. The shift to online learning has exacerbated existing disparities in access to resources and technology.

“At home internet access is a luxury,” said Gholar, in reference to the “loss” of students as schools shifted to virtual learning.

The disparities aren’t new with the pandemic but have existed in American education for decades.

“How could my brothers and I…arrive to this country two grade levels ahead of our peers?” said Amouzou, referencing his experience with the state of education in the US. He was 9 years old when he moved from Togo.

Following graduation from CU, Amouzou joined Teach For America. He is the recipient of the 2015 Sue Lehmann Teaching & Learning Award, a 2017 Camelback Ventures Fellow and winner of the 2017 TFA Social Innovation Award.

“When I work with children of all races, they are extremely capable of antiracist thought, anti-racist behaviors and antiracist actions. It is not this elusive dream, it is an intentional design of these interlocking systems of oppression” Amouzou explained.

Amouzou serves as the executive director of Empower Community High School. He said its mission is, “authentic education that is led by students, guided by educators and co-created with community.” Amouzou is working to build solutions within the education system itself.

“It’s really a logic about how can we overcome this idea that people can’t come together,” said Metzl. “It’s the polarization narrative, it’s not just the resource narrative.”

Metzl works off of his experience writing “Dying of Whiteness: How the Politics of Racial Resentment is Killing America’s Heartland, interviewing poor, white Americans in the South.”

“You are bastardizing the education of even white rich children,” said Amouzou. He referenced the shooting of a Black man out for a jog, asking rhetorically, “what education led to a man who shakes in his boots at the sight of a fellow man running in his neighborhood?”

Education systems are failing Black, Brown and White children alike because they fail to address the existing racist structures that prevail. Both Amouzou and Metzl are building education to address these failures.

“And now you realize where the true achievement gap lies, the humanity gap,” Amouzou said.

Metzl, director of the Center for Medicine, Health and Society at Vanderbilt University, explained a shift in Vanderbilt’s pre-med curriculum towards structural competency. “The idea was: yes, you’re gonna learn the science but you also need to know the bigger structural variables,” he said.

Structural competency is key to shaping the next generation of doctors.

“For doctors to really intervene into health they couldn’t just have to be culturally competent they needed to form alliances with communities, community groups…to realize that every problem that looks like a medical problem isn’t it’s also a social problem, it’s also a political problem it’s also a question of investments,” said Metzel.

The group discussed the existing structural causes of racial disparities in the US not just in education but more broadly in society.

Author of “The Protest Psychosis, Prozac on the Couch and Against Health: How Health Became the New Morality,” Metzl related structures of racism to historic institutions established in the 60s. He pointed to a shift in funding from prisons to psychiatric hospitals and a body of patients, Metzl explained, “who were a lot, all of a sudden, of Black men who had been involved in social and racial protests in the 1960s.”

According to Metzl, the system was designed to control those who fought against it by devaluing their cause.

“It’s clear that we need elected officials who will take action not only to fix the immediate problem but also to solve the structural issues,” Gholar said.

Gholar is the president of Emerge, an organization dedicated to recruiting, training and connecting democratic women running for office. “We have seen our alums, these democratic women, step up and fill these important gaps,” Gholar said.

“Decisions societies make at this moment set the stage for the country for the next hundred and fifty years or more,” Metzl concluded.