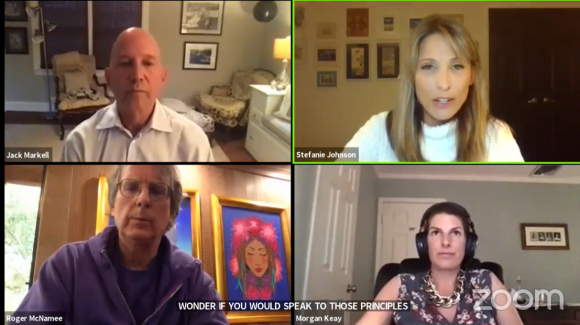 The Conference on World Affairs (CWA) held a two-day “CWA Virtual” event on Sept. 10 and 11. During Thursday’s event, which focused on the theme of leadership, prominent keynote speakers from around the country shared their experiences involving how ethical decisions have been integral to their leadership abilities, as well as how these skills will help to shape future generations, in an panel called “Leadership and Ethics.”

Morgan Keay, founder and CEO of Motive International as well as a University of Colorado Boulder alum, opened the panel with an anecdote about some of the principles she holds today.

“Even as a U.S. official, my loyalties went beyond the nation to what I called ‘Team Human,’” Keay stated, referencing decisions she made as a foreign service officer with the U.S. Agency for International Development.

The concept of working to help humans as an ethical choice was also echoed by former Delaware governor Jack Markell. After encouraging the audience to formulate their own definitions of ethical leadership, Markell relayed his own.

“For me it really means leaders who act for the common good, leaders who respect the dignity and the rights of others,” Markell said.

Another aspect that all the panel’s speakers emphasized was the power that this generation of college students has. “You in the younger generation, this is your opportunity,” Roger McNamee, Silicon Valley investor and author of “Zucked: Waking Up to the Facebook Catastrophe,” stated.

Markell pointed out the discrepancy in this point, saying, “I understand why people of your generation are a) cynical and b) possibly saying, ‘I don’t know why they picked these people as panelists because it’s their generation who screwed it all up for us,’ and I don’t think you’d be wrong in saying that.”

McNamee also mentioned issues regarding climate change, social justice issues and school debt, which he credited as all being outcomes of leadership decisions.

Despite these realizations, each panelist reassured the virtual audience about the future.

“Those are things that we should be able to get right,” McNamee concluded. “The three of us are willing to fight for that, and I grant you, looking around at our generation, there’s plenty of people who are a part of the problem; but we’re here for you.”

The fully recorded event and other events throughout the conference can be found at the CWA’s YouTube channel.